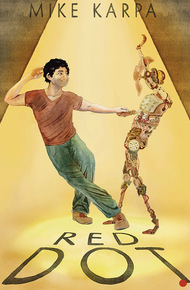 Mike Karpa was once member of a makerspace (woodworker) and knows how semiconductors are made. His fiction, memoir and nonfiction have been published by Tin House, Foglifter, Tahoma Literary Review, Oyster River Pages and a number of other magazines. He lives with his husband and dog in San Francisco. Red Dot is Mike's second novel, after Criminals.

After the disaster of global warming, people are positive, sensible and creating a better future. Mardy is a gay man, one of a group of twenty-something queer artists competing to make it big. True, he's always comes in second to an irritatingly successful rival, but his AI friends have his back.

Unfortunately, since sentient AIs are classified as non-persons, being friends with them could land him in jail. When he falls for his rival's identical twin Wes, well, that's awkward enough on its own, but could wealthy and powerful Wes also be helping keep AIs subservient?

Mardy may have to choose between fairness for his friends and his romantic ambitions. A world where everyone makes good decisions … what could possibly go wrong?

Chapter 1 Mardy’s ExMail delivery jet was vectoring in fast on San Francisco. “Coming in a little hot, don’t you think?” he said to the plane. “It’s fine, Mardy,” the plane replied. Mardy gripped the open side-portal of the plane. Hoverdown would normally have engaged by that point, but there was little at the moment to distinguish their trajectory from a kamikaze run at his apartment building rooftop. “Plane?” Mardy asked, panicking a wee bit. They were plummeting. Mardy clamped his lips against the wind. He wanted to make the designstation time he’d booked for the evening, but as much as he wanted to be a full-time machine tool artist, he’d prefer not to die in the attempt. One hundred feet, fifty feet. Twenty. The plane hit its thrusters hard, sending Mardy sprawling out of the portal. He managed a shoulder roll onto the hot concrete roof, ending in a crouch. His heart pounded as the impact of his landing reverberated through his bones. His plane floated above the roof. “See you tomorrow, Mardy.” Mardy stood. Did he detect a smirk in the plane’s voice? It maintained its hover, wheels retracted. Was it waiting for Mardy’s reaction? “See you tomorrow,” Mardy mumbled, shaken, sweating, and not just from the sun beating down on them. The plane waggled its wings ever so slightly. It was laughing, Mardy was sure of it. Mardy waved slowly as the plane left for who knew where. The official story was that all the delivery jets were operated by a central AI, a single intelligence. But Mardy had sensed differences between planes almost from day one and found it harder and harder to pretend he didn’t. And this plane, a jokester, was his favorite. It knew Mardy was light on his feet, able to handle the abrupt braking. It was playing with him. Mardy wanted to give it a name. Phil. The name popped into Mardy’s mind, unbidden. Which felt more alarming than the idea of plunging to earth through an open portal, because naming AIs was illegal—not just technically illegal, but illegal enough to land you in jail.