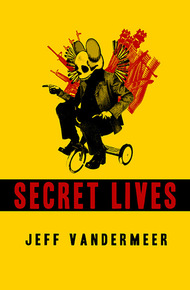 A collection of unique short fictions by the NYT bestselling author of the Southern Reach trilogy, previously available only in a signed, limited, numbered edition. These stories, praised by K.J. Bishop and Liz Williams, take the facts of real life fantasy readers and uses them as the starting point for startling, funny, and rapturous secret lives. Discover clandestine librarians, a man obsessed with a mechanical duck, a strange mascot, a person who is a portal, a priest battling a shark, and much more. Originally published in a limited edition hardcover and available now as an ebook for the first time.

Jim Daly is a teacher and book collector who owns Arthur C. Clarke's manuscript of Deep Range. Unbeknownst to friends and family, Mr. Daly is also the mayor of a miniature underground city of his own creation. He has built this city at an undisclosed location after much surreptitious removal of dirt over a period of several years, followed by an equally meticulous and masterful building and then resodding project. A trapdoor with artificial grass camouflaging it completes the illusion that no such subterranean building, no such city, exists... The city itself is an amalgamation of every city Mr. Daly has ever read about in literature, but with one important distinction. Mr. Daly has chosen to create every alley, every courtyard, every courthouse, notdescribed on the published page. His frankencity lurches forward on the assumption of inference, of those selections of text where other elements arealluded to; it is the space between the words that Mr. Daly has mined for his creation. It is this which gives him pleasure, for he has not performed a stale re-enactment of that which already exists whole and glowing in every reader's mind, but instead provided what each writer failed to provide, or could not provide... Built of spare parts—cast-offs and has-beens, the dullard sheen of dusty junk shop antiques re-imagined into utility and grace—the city has a unity instilled solely by the mind of its mayor-creator. In the light of day, the artificial suns of common bulbs, and in the dusk of dimmed track lighting, Mr. Daly admires his City on the Hill. All faiths come together here, he thinks. All faiths, whether fantastical or mundane, whether futuristic or anachronistic. Here, they form a single world, and it is good.

Peter Danssaert researches the illegal arms trade, diamond smuggling, organized crime, and Lebanese networks. These rather mundane activities sometimes require him to travel to West Africa, the Middle East, and Eastern Europe. He lives in Belgium, known as one of the world's foremost beer countries, with a football team respected for playing stingy, physical defense. However, despite his travels and his current location in Belgium, Danssaert's ties are much stronger with the tiny country of Dissembla, which is, according to him, located somewhere between the Antipodes and "the gleam in the eye of the Fisher King." More specifically, Danssaert is the King-in-Exile of Dissembla. Lately, King Danssaert has taken to announcing his status as royalty given the slightest provocation—such as passing a stranger on the street. "I am the ruler of Dissembla," he will say. "Severe is my discipline, unwavering my justice. Er, when I left my place, I forgot to bring along a few coins for a cup of coffee. Care to loan a King a euro?" Several are the parties he has thrown for himself, to which bemused friends and family attend with ever decreasing enthusiasm (and in ever decreasing numbers). At these parties, King Danssaert makes his entrance in the full traditional regalia of his office: The twin ostrich plums jutting from the steel helmet (that some mistakenly believe is but a common colander, out of context), the royal purple robes, made of finest rayon, inset with semi-precious stones, the fine denim slacks or sometimes tights, and the boots with the curious glued-on up-turned toe points. Lately, too, King Danssaert has told anyone who will listen about the ongoing war between Dissembla and Sembla, its neighbor—waged over a dispute involving two musicians, a cow herder, and a harmonica. At least, that is how it started; the issues are now too important to allow for quick resolution. King Danssaert is certain of this. And just as certain that as soon as the war is over, he will be allowed to return to Dissembla, there to take up his rightful place on the throne. "Spies abound," he says to people who he knows not at all. "Spies are everywhere. I found one in my pocket the other day. I found one at the supermarket. I found one in the water faucet, dripping slowly into my apartment." Peter Danssaert is fairly sure that his true enemies have long since stopped watching him, thinking him mad at all points of the compass, but has been in character for so long now that he is not sure he can stop. For, surely, some day the conflict between Dissembla and Sembla can be resolved?