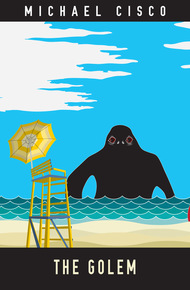 The Golem by Michael Cisco

The follow-up to the International Horror Guild Award-winning novel that launched the career of a writer sometimes described as "the American Kafka." Struck by lightning, resurrected, cut open, and stuffed full of arcane documents, the Divinity Student constructs a golem replacement to pursue his love underground, with lyrical consequences.

Threads coming together again with a racing, vertiginous feeling, speeding down a tunnel hands thrown up in shock and dismay—it's time, a darkness falls open below—

Read: a white room, wide white pallet, a long window with Venetian blinds, a closet, one door hanging open, a mirror on the inside of the door. Mild, milky light snowing across the thick carpets and across the walls, everything quiet. The room is empty; no one is here. Turn to leave with a tearing disengaging feeling and see in the mirror a collapsed figure, the nearer hand sweeping heavy as stone and slow as he turns to go, hanging his head and turning like one turns to run from a nightmare, straining inside against his body as it petrifies into gray film and slows... and slows... tragically not stopping—helplessly jammed in time, jammed stagnant and decaying.

Miles beneath this white room, a lightless black room filled with control panels is embedded in the rock, hands and eyes fluttering like bats above illuminated displays. Now and then a hand or an eye flaps up to make control adjustments, suddenly animated. The keys thrill again to the purposive touch of icy fingers. Turning from the mirror, emptiness opens at his feet and he falls fixed in an endless shift of equilibrium, arcing forward hands thrown up to protect but so slowly that he feels his body ticking through increments of space. When he finally drops it's as though a hand had turned him out of its palm, and he falls, spinning, closet light and mirror winking out in space above him.

Now—this is always difficult—boundless space on all sides. His pupils dilate until the iris splits, his back arching headfirst downward, neck whipping right and left in the onrush of air. Repeated pulses of nausea, he vomits from an empty stomach, stinging bile churning between the teeth, up the cheeks, over the chin, into the nose and ears, hair, splattering the throat, searing the eyes. Doubled-up spins faster screaming without hearing the screams, screams unheard by anyone. A sudden cold sensation on a wet face, a struggle to breathe through ropes of mucus, eyes tearing uncontrollably, a stink, unraveling body. Wild attempt to catch hold of something, a pawing out with hands. Very soon, there is no physical sensation, no sense of his own body, only an intensifying forward tilt of falling, expansion of a body, weightlessness, rigid and uncoupling, crashing through soap-bubble panes of space like icy glass, numbed; this falling body begins to trope through all its forms.

In the darkroom, hands on controls.

The outer surface of a skin comes first, bleached opacous white, then raw red eyes, raw as raw meat in hot eye sockets, thin hair—the color rilling out of it draining transparent fibers, finger and toenails flick past, teeth turn clear over incandescent nerves and blue and red blood vessels, oil beads appear on the skin and then spread in the force of the wind writing trickle-patterns across skin tightened and painful. His back hunches and seams, distending in funnel-shaped white loops of manta-ray flesh, opening in the front to catch the air and tapering back through rings of convulsing muscle to stream out through openings in his sides, two jet sheets of air streaming across a lower back and some trailing legs, blurred chalky white like fish under murky water.

Burning cold air, stabbing and knotting in his muscles as he gnashes soft teeth, angling himself up to push himself up off the air and stop his fall. His body restored for the first time, rigid in its full weight, he retches again and it pours down out of him, tan jelly mixed with tiny threads of blood, caustic against his oily skin. His ears pop and then crack, and his eyelids squeeze together oozing tears that steam off his cold cheeks, his hair prickling. He is strangling and toppling unconscious—turning in midair, end over end, slower and slower, like someone turning in a nightmare, clicking through separate increments of space, spinning down through clouds and a dimming night sky. Below him, a desert landscape ringed with mountains, a city gleaming with light, and beyond its walls a sea of reflected lights shining in pairs, watching.

Elsewhere, hands flutter and adjust the controls, and then hold.

To be read another time, a separate time.

There are two kinds of priests or priestly people. One sort are linked by tradition to the lives of their parishioners—they perform socially. These are the kind who organize charities, who extend aid to the needy, who regard the well-being and happiness of all their flock as personal responsibilities. The other variety exists in mortal terror and loathing of the material world, and recoils from every object as if it pricked like a needle—and that pinprick is a conduit to a withering current of anguish that flows from contact and which floods them to the core, like an infection and a lingering illness. This second type will take what limited refuge it can in the cloistered, monastic life, where everything is assiduously marked and branded with the icons and names of the divine, giving these objects an elevated status as corporeal components of ideas, making the fact of their material existence less chilling. But once begun, the process by which these priests shrink from the physical world is difficult to arrest. Many will eventually recede so far that they stare out in horror at the boundaries of their own bodies, feeling at every instant the impossible weight and degradation of their filthy garment of flesh. They walk cowed and bent, with their heads drooping to one side, their eyes screwed up so as not to see too much or too clearly, and their bodies are dwindled and transparent, as if they've begun to evaporate in the rarefied air of their retreat. All the force of their faith and expectation is directed toward the moment when they will finally lose themselves once and for all in limitless absolute noumenal perfection, and anything not also touched, and flawed, by the idea of perfection, is forever beyond their grasp. The Divinity Student is one of these.

If there's ever a film... clouds and sun, sunlight ebbing and flowing in clouds.