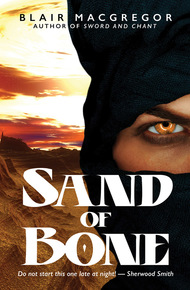 Blair writes fantasy—adventurous, epic, and dark. She also teaches and speaks on a variety of topics—martial arts, teaching, wellness, failure and resilience—for audiences ranging from a couple dozen to a few thousand. Most evenings, you can find her teaching karate at her local dojo. In between all that, Blair hikes and camps, grows organic produce, and indulges in the occasional ziplining excursion. She loves traveling to places both wild and domesticated. She currently lives in rural Indiana with her one son and two goofy dogs.

Her short fiction has appeared in Cicada and Writers of the Future. She is a graduate of Viable Paradise.

Sand of Bone by Blair MacGregor

Syrina – descendent of the gods, one of the Velshaan who rule the deserts and deltas, cast out by her bloodkin for daring to reject their intrigues. They thought exile to the desolation of Salt Hold – surrounded outcast Blades who despise her – would end her defiance. But Salt is safer than the grand alcazar of home when she uncovers the secrets of commanding sand, fire, water, wind – the power mixed with ambition that nearly destroyed her bloodkin in generations past.

Pyrius was the desert's most respected Blade Commander until the bloodkin sentenced him to Salt. But he finds a way to keep his Blade vows while still exacting revenge by choosing to serve the exiled Velshaan Syrina. When her bloodkin's threats become actions, Pyrius sets a plan in motion that will either prevent the looming civil war simmering in the desert's heat or see them all fed to the sands for sedition.

Because Syrina's ability to control the desert's deepest elements is still fickle and raw – too weak to defeat her bloodkin, strong enough her bloodkin want her stopped before she learns more. The gods demand a soul in trade, and the fate of the living rests upon the redemption of the dead.

I am thrilled to see my dark fantasy novel included in this bundle. Sand of Bone pits the demands of personal loyalty and ambition against ancient laws and the threat of resurrected magics. Outcasts become outlaws, the dead walk the sands, and the youngest descendants of the gods are set to wage war against one another no matter the cost. – Blair MacGregor

Syrina held up a finger for silence, and pulled a chunk of sandstone from the small pile of rocks beneath her cot. She placed it in the brazier, then pressed her left hand against the stone wall and spread her fingers wide. Her right hand she clenched into a fist over her heart. After a last anxious look at him, she closed her eyes.

Nothing happened. Pyrius began to wonder if Dumak had been right in doubting her sanity, if her self-imposed exile within exile had eroded her sense of reality. Perhaps her bloodkin had, in truth, cast her out to avoid the shame of her nighttime hallucinations, illogical suspicions, or—

She took a sudden deep breath and held it. Slowly, she drew her fist from her chest and held it over the cold stone in the brazier. Her fingers opened above the stone as breath trickled from her lips. Then, from within the stone, a pinpoint of light flared and died. Then another, and another. The pinpoints began to pulse and swell, joining to create ribbons of light that slithered over and into the stone, widening and snapping and linking and hissing. With a final hushed puff, the flickering settled into a steady and silent glow that encompassed the stone and pushed warm air against Pyrius's face.

He fell back on his hip, swearing under his breath at the impossibility before him, then stared at the fragile-seeming woman who had created it.

"Lo, he made the sands to burn," she recited from the old tales, "and his enemies could not escape but were turned to ash."

Pyrius shuddered, recalling the childhood nightmares he'd enduring after hearing a storyteller recount what a single Velshaan could achieve. It hadn't been the tales of fire that haunted him, but of wind—the gusting sand that could scour away flesh and fill the lungs, killing from within and without at the same time. No Velshaan had held such power since the Woes, not since the usually indifferent gods relieved their children of that burdensome gift. But now this one Velshaan, this outcast Velshaan—

"By all your ancestors created," he whispered, "you have no reason to fear your bloodkin."