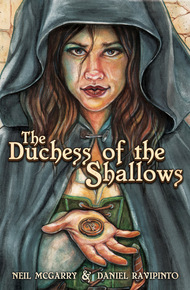 Neil McGarry and Daniel Ravipinto are, collectively, a computer programmer, afraid of heights, a former technical writer, a rabid Go-Go's fan, a board-game designer, a founding member of the Alan Turing Fan Club, an award-winning interactive-fiction author, a native Philadelphian, an ex-drummer, one heck of a party thrower, a pianist, from New Jersey, the holder of three degrees, an avid role-player, an improvisational actor, an uncle, a stand-up comedian, not particularly fond of flying, a video gamer, a lover of Halloween, a story-game/RPG developer, and an Ultimate Frisbee enthusiast. They are currently hard at work on the next installment of Duchess' story, The Fall of Ventaris.

The Duchess of the Shallows by Neil McGarry and Daniel Ravipinto

A game is played in the fog-shrouded city of Rodaas, and every citizen, from the nameless of the Shallows to the noblest of the Garden, is a player or a pawn. And no one is as he appears.

Not Minette, brothel-keeper and obsessive collector of secrets. Not Uncle Cornelius, fearsome chief of the gang of brutes and murderers known as the Red. Not the cults of Death, Wisdom, and Illumination, eternally scheming and plotting along the Godswalk.

And certainly not the orphaned bread girl known as Duchess.

Yet armed with nothing more than her wits, her good friend Lysander and a brass mark of dubious origin Duchess will dare to play that game for the most coveted of prizes: initiation into a secret society of thieves, spies and rumormongers who stand supreme in a city where corruption and lies are common coin.

Chapter One: The Color of Her Coin

The instant she showed the old man the coin, Duchess knew something was wrong.

Her sixteen summers had given her little experience in dealing with men like Hector, but as she held up the mark she could tell from the look in his eyes and the set of his shoulders that he was now more anxious than she. She turned the small, worn piece of brass in her hand, the wan light trickling through the windows catching on the edges of the raised markings on either side: a large letter P encircled by a snake devouring its own tail. She watched him and tried to look as if she did this sort of thing every day.

He squinted to see the coin more clearly, tilted his head and sneered. The expression did little to improve his appearance. He'd been standing at the far corner of the dimly lit room when she'd first entered the pawn shop, hunched over a splintered broom that was nearly as skinny as he. His tunic was threadbare, his breeches even more so, and both were dulled by the same dust that tickled her nose. He looked like someone's dotty uncle, except his eyes were bright with suspicion.

Still, the coin had caught Hector's attention, bringing him in for a closer examination. And now she found herself so taken aback by his doubt and fear that she found she had nothing to say. A mark was a mark, wasn't it? Surely he'd seen others in his day. Any moment he would smile, reveal that she'd done precisely the right thing by showing it to him, and then they'd proceed with their business. She hoped.

As if coming to some decision, Hector stepped away more swiftly than she would have expected and went back to his broom. He swept vaguely, head bowed, although through the dishwater mop of his hair he kept one eye firmly upon her. As far as she could tell his sweeping served only to shift the dust around the piles of junk that crammed the room from wall to wall. She made out cast-offs of every description: rusted weapons leaning near furniture in various stages of disrepair, boxes of paste jewelry lying on rolls of cloth and piles of clothes that ranged from fine to filthy.

He worked quietly for a long moment. She debated simply taking the mark and leaving when Hector suddenly broke the silence. “Where did you get something like that?”

“I found it in a pie,” she said casually, trying to seem more confident than she felt. “I was told to show it to you. You've been shown.”

“And what I am supposed to do?" he replied, scowling as if to cover his uncertainty. "Hold your hand? Kiss your arse?”

She hesitated. That bit of brass represented an incredible opportunity, one she'd long coveted but certainly never expected, but of course it would never do to say so. “I was told you would know how to open a door,” she settled on. In any case that was all she really knew.

Hector rolled his eyes, but Duchess sensed that his impatience was more than a little feigned; perhaps he found it safer to be angry than scared. “As if I have nothing better to do with my time.” She looked at the broom in his hands, raised an eyebrow, said nothing. He flushed angrily. “What do you know of the Grey?”

Again, she found herself taken aback. No one spoke openly of the Grey, not even Minette, who was as formidable as anyone Duchess had ever known. That Hector would do so on such short acquaintance made a part of her sit up and take notice. “I know most people don't speak of it to strangers,” she said. She turned the coin over, and over again, passing it from hand to hand, feeling more certain of herself. She suddenly wondered that the Grey allowed someone like Hector into their ranks. He was no Minette.

Hector flapped a hand in dismissal, but Duchess could tell she'd struck home. “You can flash that pretty coin of yours all you like, but it doesn't mean anything on its own.”

“It meant enough to put you on the jump,” she replied as coolly as she dared. "You just about broke your legs scrambling over to get a look at it."

He grunted. "Well, hand it over,” he said, and Duchess was suddenly reminded of one of the fishwives who often bought biscuits in the morning. She was large, loud and friendly, but she always tried to get more than she'd paid for by pretending to misunderstand the deal she'd just reached. Hector was older, skinnier and creakier, but his manner was the same.

Duchess shook her head, closing her fingers tight about the coin. "I was told to show you this mark; no one said anything about handing it over." He made as if to protest but she rode over him. "Now can you help me or not? Or shall I take this elsewhere?" She wasn't sure just where she'd take it, but Hector didn't need to know that.

For a moment she thought she'd overplayed her hand, that Hector would simply ignore her and go back to his sweeping, and she sensed that a part of him wanted to do precisely that. Clearly a mark was not always a mark, she thought, glancing at the coin in her hand. The origin and purpose of that piece of brass might be unclear, but the letter that had accompanied it was not: Hector was to be her guide into the Grey. His eyes measured her for a long moment, then he sighed. "All right, all right,” he grumbled, setting aside his broom, and his tone and manner changed, as if he were reading from a script long since memorized. “It is within my rights to demand a test before I open this door of yours.” He gave her a yellow smile, but it was a forced and brittle thing. “Though I imagine someone as worldly as you already knew that.” She hadn't, of course, but she'd be damned if she'd admit it. “With a little luck,” he continued, “you'll not survive the test and I can have done with you.” She said nothing, refusing to let him frighten her. Instead, she simply tapped the coin against the edge of the table. His eyes flicked to the mark and then back to her. Again he sneered. “Come back tonight. Last bell. Knock thrice on the back door.”

She was done here. She slid the mark back into her pocket and turned to leave.

“One more thing,” Hector added as she reached for the knob, “When you come back, don't bring that young man who's been skulking on my doorstep. Come alone.”