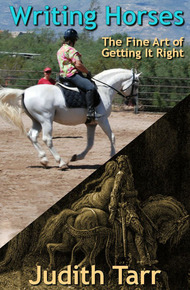 How to write about horses–and get it right.

How far can a horse travel in a day? What does a horse eat? When is a brown horse really a sorrel (or a bay, or a dun)? What do tack and withers and canter mean?

In this concise handbook based on her "Horseblog" at Book View Café, author and horse breeder Judith Tarr answers these questions and many more. She looks at horses from the perspective of the writer whose book or story needs them as anything from basic transport to major plot device, and provides definitions, explanations, and links and references for further research–leavened with insight into the world of the horse and the humans who both use and serve him.

How fast can a horse run? What happens when a foal is born? How have humans and horses evolved together over the millennia? And above all, what mistakes do writers most often make when writing about horses, and how can the educated writer avoid them?

Here is a guide to the fine art of getting it right.

I've known Judy almost as long as I've known Dean, and I've read her work even longer. In addition to writing excellent fantasy and historical fiction, Judy breeds, raises, and trains horses. And not just any horses. Lippizan horses. If you have a horse question, Judy has the answer. I'm so glad she's written this book, because it compiles all the answers in one handy guide. – Kristine Kathryn Rusch

Horses Are Not Dogs

Just the other day, one of my equestrian connections tweeted this very thing. "Horses aren't dogs!"

Apparently she had run into another case of a would-be trainer trying to apply what she knows about dogs to the equine in her life.

Write (or do) what you know is often excellent advice. Writers may think, well, a dog is a domesticated animal, and so is a horse. If I know how my dog acts and thinks, I can extrapolate that to the horses in my novel.

Hence, the horse who runs around whinnying at everything. Who gets a bag of oats dumped in front of her while the rider goes off on a day-long, secret reconnaissance. Who may even flick its tail in the same way a dog would wag that appendage—the list goes on and on.

So, you may ask, what's wrong with that? Well, first of all, a whinny is primarily a distress call. Horses for the most part don't vocalize, though they may snort in alarm or to clear the sinuses, whicker (flutter their nostrils) at something they love (foal, food, pet human), or paw and bang against the wall to demand something right NOW!

Stallions are talkier than mares and geldings. They have a whole set of challenges and come-hither noises, and in front of a mare in heat may sing a Wagnerian aria. But they are not going to whinny when you talk to them. They may nuzzle or butt you, whicker at you, or tilt an ear in your direction. They don't whine or whimper, either, contrary to the novels I've read in which they do so early and often.

Dumping a bag of oats in front of a horse and leaving him for a day? You'll come back to a dead horse with an exploded gut. Horses cannot eat large quantities of concentrated feed. They're grazing animals, designed to work their way across the steppe, eating poor-quality grass and whatever additional fodder they can get at. They don't have any self-control in front of rich (especially sweet) feed and will gorge on it until it kills them.

Because, unlike dogs, horses can't vomit. What goes in one end must come out the other. If that is blocked or allowed to ferment, the horse is at immediate risk of death. Run an online search for "Colic, the number one killer of horses," and see how many hits you get.

Because horses are grazers who have evolved to ingest small quantities of grass forage all day long, those long quests across barren country will require a train of mules loaded with grain and fodder. And there had better be plenty of water available. No water = impaction colic = dead horse.

You can keep a horse alive by feeding him cubes of hay or small amounts of grain, provided he also gets some grazing. As for water, he'll need a minimum of ten gallons per day in a temperate climate with little or no exercise. In a hot climate or during hard work, he may need fifty gallons a day or more.

He shouldn't run hard and then be given a barrel of ice water, either. Make him drink slowly and walk him around to make sure the system keeps running smoothly.

And the tail thing? Flicking or swishing of the tail can be a sign of temper—somewhat like a cat. But mostly the tail (which consists of a short—one-to-two-foot—tube of muscle and bone and a fall of coarse, often wavy hairs) is a fly swatter. Horses do not wag their tails to express joy or friendship.

Vocal and logistical issues aside, horses don't think like dogs, either. A particularly good summary appears here. Dogs are pack animals and predators. Horses are herd animals, which is not quite the same, and prey animals, which is quite different.

It's true that a herd, like a pack, works together for a common goal, follows a leader and has a hierarchy. But where the pack is working to find prey to feed on, the herd is working to keep from becoming that prey.

The dog runs at you. The horse (with certain exceptions—stallion on guard, mare protecting foal, etc.) runs away from you. That's her evolutionary advantage: fast reactions and superior speed.

This doesn't mean she's a simple Pavlovian fight-or-flight machine. For quite a long time horses have had a reputation for being, essentially, stupid. Those who contest this have been accused of anthropomorphism and general silliness.

Recent studies have found that equine intelligence is much higher than researchers expected. I'm particularly fond of the study in which the Morgan outdid the border collie. Years ago in a print publication I read about verbal-acuity tests that put horses above German Shepherds.

My personal experience is that once the horse figures out you're talking to him, he'll acquire quite a large vocabulary, and respond to simple sentences. A really smart horse has about the understanding of a human toddler. Excellent on concrete concepts and "You stand still while I mount, I give you a cookie," not so solid on abstracts like "I'll see you at 9 a.m. tomorrow." Though they do have an infallible internal time clock when it comes to mealtimes and turnout schedules.

Horses learn really well by example, which makes sense in the context of a herd. Horse sees somebody else doing something, horse will imitate it.

They also have a truly remarkable memory. Recent studies have found that horses can remember a single event ten or twenty years ago, and reproduce behavior taught at that point, even if it has never been repeated since. That line about the elephant never forgetting? The horse never does, either—and since he lives, on the average, twice as long as a dog, he has more time to remember. He's a great latent learner, processes data well and thoroughly. You can teach him something one day, and come back three days or three months or three years later and find he's right there for you when you ask for it again.

Bottom line? Horses have their own distinctive biology and psychology. Extrapolating from other animals, notably dogs, can lead to egregious and sometimes fatal errors.

If you need to write about horses but have no experience of them, at the very least get a horse person to do a beta read. If you can get some experience of horses yourself, that's even better. There's no real substitute for actual, hands-on, on-the-hoof horse time. Even a negative reaction to the animal can enrich your writing.

But before you call that horse expert or arrange that visit to the local barn, here's a compendium of information that can help you figure out what questions to ask and what directions to take with your characters or plot. I'll begin with basics—terms and concepts that horse people often take for granted—and then move on to more specialized details. Not too specialized, I promise! But enough to add that crucial bit of extra dimension to your story.

Horses, to horse people, are more than a hobby, they're a passion. To a horse person, a horse is a person, and horse people tend to like horses a whole lot better than they like humans. They really and literally will give their kingdom for that horse.

If you understand this passion, you can impart it to your writing. And that, if done right, makes your writing that much more vivid in your reader's mind.

I'm here to help you get it right. I won't pretend that this book contains all the gathered knowledge of the horse world—that would take a couple of hundred volumes just to get started. To a horse person, much of what I have to say will seem overly simplified or incomplete, or doesn't cover all of the possibilities, or could be debated from several different sides, or…

As I said, it's a passion. Here's a little taste of that world, and the amazing animals—and their humans—who live in it.