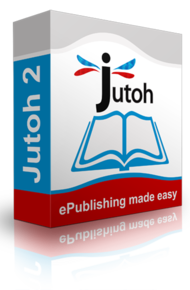 Jutoh is suitable for creating ebooks for books with relatively simple formatting requirements. So, it's great for novels, self-improvement books, biographies, and so on, but not so good for mathematics textbooks.

Unlike most software, Jutoh is cross-platform and runs on all popular desktop and laptop operating systems. So if you're thinking of switching platform in the future, you don't have to worry about your investment and files becoming obsolete. If you want, you can install the Windows, Mac and Linux versions on a USB memory key and switch machines as much you like, retaining all your settings. Specifically, we support:

•All recent 32-bit and 64-bit desktop Microsoft Windows platforms - that's Windows XP, Windows Vista, Windows 7, Windows 8 and Windows 10.
•Mac OS X 10.3.9 and above (PowerPC and Intel processors).
•Most Linux distributions (32-bit or 64-bit). Debian, RPM and tarball packages are provided.
•Intel Chromebooks, after installing a suitable Linux in developer mode.
•Raspberry Pi 2 running Raspbian or other Linux. Jutoh is free on Raspberry Pi.
•FreeBSD 7 and above (on request).
Jutoh does not run on Android or iOS devices.