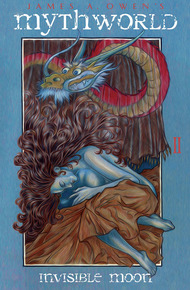 James A. Owen has been an author and illustrator for more than a quarter-century, and specializes in finely-detailed pen and ink fantasy illustrations. His most prominent work is the graphic novel STARCHILD, the coloring book series ALL THE COLORS OF MAGIC, the trilogy of inspirational books called THE MEDITATIONS, and the eight books in his bestselling series, THE CHRONICLES OF THE IMAGINARIUM GEOGRAPHICA, which have been published in more than twenty languages. The books are also illustrated by James, and the first book, HERE, THERE BE DRAGONS, took a Gold Medal at the New York Book Awards for Best Cover.

His newest projects are his series FOOL'S HOLLOW, THE HUNDRED BOOKS PROJECT, and CALLIOPE STEEM, a collaboration with Kevin J. Anderson. More than a million copies of his publications are in print, and are sold all over the world. All of these projects are being developed at the Coppervale Studio, a 14,000 square foot, century-old restored church in a small town in Northeastern Arizona.

The second volume, Invisible Moon, takes place in a small haven called Silvertown, in upstate New York, where a journalist named Meredith has just received news of the murder of her father – Michael Langbein. But before he died, he sent her a clue to his death and to the strange and terrifying changes taking place all around the world: a page from the mysterious Prime Edda.

With the help of her lover Shingo, and the photographer Weird Harold, Meredith begins to investigate as a terrible winter settles over the world… and everything begins to change. Technology no longer works. Electricity fails. Vehicles are turning into mythological creatures… and so are the people – including Meredith herself, who may be turning into the Russian witch, Baba Yaga…

James Artimus Owen is extremely inspirational. He and I have developed an exceptional collaboration (yes, the world will see it someday), and I've heard him give his crowd-pleasing "Drawing out the Dragons" speech more than half a dozen times. His Mythworld series was published in Germany, but never in the US, until he allowed WordFire Press to release the first volumes. INVISIBLE MOON is where the story really starts, and we felt it was the best candidate to include in the bundle. – Kevin J. Anderson

I killed the paperboy this morning.

This, of all the thoughts marching wantonly through Meredith Strugatski's head as she stirred lollipop swirls of cream into her third cup of coffee, was the one that chose to stop and stand at attention; which was unusual, because in point of fact, it wasn't quite correct. The thought which marched more snappishly after a moment's self-revision expanded to announce that she killed and ate the paperboy, which may seem like splitting hairs, but really, when she thought about it, there's a world of difference between the two statements; if she had simply killed him, well, what's to be said? That's just not a very nice thing to do, to put it bluntly. If everyone just went around killing other people, the world wouldn't be a very hospitable place to live, what with all of those murderers strolling around. That she did kill him goes without saying; although he didn't take to the idea very well; there was much thrashing around and screaming. Meredith guessed kids today must not have the discipline they did when she was young (but to be fair, she mused, sipping at the steaming cup, she couldn't actually recall any of the neighbors from back then killing any of the local children, much less eating them, so it may have been a broader societal failure rather than any specific educational lapses on the part of Kevin's parents).

If she had left it at that, well… Meredith couldn't bear to think of it. Horrible. Monstrous. It's a terrible thing, to kill a child, if you don't know how to show him the proper respect; and if there's anything Kevin McMillan deserved, it's respect.

When Meredith first moved to Silvertown from her grandparents' home in Vienna, she had rented a moving van in New York City, and (like a moron, she thought) decided she could handle the whole move by herself—which was proven wrong when she tried to pull out the handtruck ramp in the back while leaving the truck in gear. It shifted from park into reverse, nearly cutting her in two. Fortunately, Kevin McMilllan's father was raking his yard three houses down (the green house on the corner—the one with the rusted Model A in the drive), heard Meredith screaming bloody murder and came running, Kevin in tow. Kevin called 911 then found a blanket in the back of the truck, while his father shut down the engine and began first aid.

Actually, it hadn't been a blanket, Meredith recalled with a twinge of remorse, but a priceless shawl that her grandmother had given her—one of the few heirlooms that she had taken with her when Meredith's great-grandparents left their village in the Ukraine to go to Vienna—but it's the thought that counted, and for that she was very grateful.

Meredith had spent the next two months, her first in upstate New York, when she should have been sorting through her father's papers and settling his affairs, not to mention looking for the asshole who killed him, sitting in her living room encased in plaster to her chest; the only contact with the outside world her television, her lousy phone (which still has absolutely dreadful service, she thought, mentally posting a reminder to get a repairman to come look at it), the FedEx guy, who dropped off assignments she kept having to decline because of her busted hip, and the paperboy—Kevin McMillan.

Conscientious boy that he was, Kevin always—always—went to the extra trouble to get off his bike, walk around Meredith's car in the carport to her back door, and slide the paper through an open utility window where it would drop inside onto a table she could reach from her bed. Even after she had recovered, he still took the trouble to come into the carport and deposit papers on a chair, so she wouldn't have to walk far (she was still using crutches) or bend over to pick them up.

In hindsight, Meredith decided in a burst of repentance, thinking on all he did, she really should have tipped him more. She resolved within herself to make sure to be more generous to whomever ended up replacing him on the route.

Meredith was supposed to be meeting Harald Van Hassel, her sometimes-partner at the paper, at Soame's for coffee, to go over a new assignment he'd ratcheted together about alligators in the sewers or some-such stupid thing, but for some reason she felt compelled to linger over breakfast, contemplating. It must've been something about Kevin, personally; Meredith certainly never sat reminiscing about the ham in her Eggs Benedict. It was a shame, she supposed, that there was nothing left for Blaine and Helen McMillan to grieve over (well, nothing that she wouldn't be needing later, anyway). That sort of tragedy can be devastating to a parent, especially if there's no closure. Of course, there's always the possibility that they'll simply decide he's gone missing, or run away…

That was it, thought Meredith with a self-satisfied nod; that's the ticket. She ought to encourage the possibility that he's merely run away, rather than dead in a ditch somewhere, or contributing bodily to a stew. That would be the kind thing—to give them some hope. After all, everyone should have hope—and anyone in a position to offer it would have to be a pretty lousy neighbor not to do it.

Maybe, Meredith thought as she cleared the cup and saucer into the sink with the other dishes, after her meeting with Harald she could pop over with some of her grandmother's kuchen, and maybe, if she was properly empathic, she'll be able to help them to understand—even if she can't really tell them the truth, not in so many words—to know that as terrible a thing as it is to lose a child, it would be disrespectful, and far, far worse…

… if the boy had been wasted.