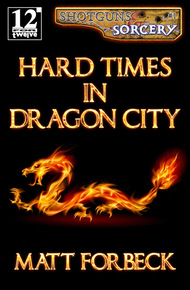 Matt Forbeck is an award-winning and New York Times-bestselling author and game designer with over thirty novels and countless games published to date, which have won dozens of honors. His recent work includes the new Dungeons & Dragons: Endless Quest books, Halo: Bad Blood, and Minecraft Dungeons: Rise of the Arch-Illager, plus work on the Rage 2 video game and the Shotguns & Sorcery roleplaying game based on his novels. He lives in Beloit, Wisconsin, with his wife and five children, including a set of quadruplets. For more about him and his work, visit Forbeck.com.

Retired adventurer Max Gibson has seen better times. Ever since he and his treasure-hunting friends struck it big and called it quits a decade back, it seems like things have slid downhill.

It's hard enough to scrape by in a sprawling mountain city in which elves and dwarves live higher than humans in every way. It's worse at night, when the groans of the zombies laying an eternal siege to the city provide a ceaseless reminder that the Dragon Emperor himself is the only thing that keeps the hordes of hungry dead from storming the walls.

When Max is called in to help investigate the wholesale slaughter of a long-dead dwarf friend's family, he thinks maybe he's finally hit bottom. Then the love of his life — the elf who left him when their careers as adventurers ended — walks back through his door, desperate for his help and with nowhere else to turn.

It's not getting any easier. That's for sure.

I've known Matt Forbeck for a long time as a fellow writer who has worked in many popular universes as a media tie-in writer, including the Mutant Chronicles, Leverage, and Halo (and we share a lot of war stories about the special skills and difficulties that work entails)—and even spent a long night over chips and salsa in a Mexican restaurant commiserating. He answered my call when I was looking for epic fantasy novels for this bundle. – Kevin J. Anderson

I'd never seen so much blood in my life, and I used to date a vampire. Well, maybe date's too strong a word, and I didn't know she was a vampire at the time. Right up until the end, that is.

I'd been in the Stronghold part of Dragon City before, far as it was from my usual haunts downslope. It wasn't that humans weren't allowed in the area, after all. More like we weren't appreciated.

Of course, the Gütmanns were different, at least Anders' branch of the family vein. He and I had been adventuring partners, once upon a time, and even after he got killed, his widow and offspring always treated me with the same kind of respect — affection, even — that Anders had shown me. I'd spent many evenings swilling mead with them, playing tile games, and chatting about the price of cut stone and how well the city's curtain wall was holding up.

Most of Anders' kids were older than me, of course, some by decades, even though they were still considered youths among dwarves. But they never let that come between us. Little Gerte would even crawl up on my lap after dinner sometimes and tell me about her day while her mother beamed over at us from the other side of the table.

Seeing them all murdered like that tore me up. I felt like someone had taken a knife and gutted me from my belt to my collar, but it was Heidi who'd suffered that fate.

When Yabair had come to rouse me from my bed, I'd known something was wrong. As a captain in the Imperial Dragon's Guard, he didn't bother to pay me social calls. Most times when I ran into him it was trouble. If he sent someone around to my place over the Barrelrider in the Big Burrow part of town, something disastrous had happened.

He'd never come there on his own. An elf like him wouldn't be caught slumming around the lower parts of the city, not unless he was on official business. So when I heard someone pounding on my office's outer door so hard I came out to answer it in my skivvies, I had no idea it would be him waiting for me in the stairwell.

The look on his face told me almost everything I needed to know. "Am I under arrest?" I said. He didn't say a word, just shook his head from side to side. "Can I get dressed?"

He frowned. "I don't suppose time is of any material essence in this matter."

I took that to mean that whatever had happened was already over with, but I still threw on a fresh shirt, pants, jacket, and hat as fast as I could. I skipped shaving and tapped a coffee cup with the tip of my wand to conjure up a hot slug of joe to sip on the way. I figured I'd need it.

Outside, Yabair had escorted me into one of those flying chariots the Guard favored — garish things painted in their traditional scarlet and gold, with the Imperial Dragon's seal emblazoned on the front. In the past, I'd only ever gotten to ride in one while I was in handcuffs. I'd like to say it was a treat to be able to ride up front and without any manacles keeping me rooted to one of the seats in the back, but the guard's manner had me spooked.

No matter what Yabair had in mind for me, the rest of Dragon City seemed to be going about its business without a hiccup. From high in the chariot, I could see the entirety of the city splayed across the mountain's southern face, all the way from the golden Dragon's Spire at the top, down through the Elven Reaches that encircled it and straight through the progressively grimier parts of town to the Great Circle, the thick wall of stones and enchantments that kept out the undead horror that lurked in the wild lands beyond.

Even at this early hour — just after the lightkeepers had gone through the streets and capped the glowglobes that kept us company through the night — at this height, with the chill wind whipping past my face, the city was filled with familiar sounds and smells. Merchants called from their stalls, hawking their wares: food, services, spells. People shuffled through the cobblestone streets on their way to work, to school, or to their next drink. Fires blazed under meager meals and incinerated trash, their tendrils of smoke blending together into a melange of scents that wafted high into the air to join up high above us all with the never-ending column that streamed from the Imperial Dragon's lair.

I'd been born here, lived here, and with luck I'd die here, of old age in a warm bed. Nothing in my past choices of careers pointed toward that kind of end, I'm sad to report, but a man could still hope, even here in Dragon City. They hadn't figured out a way to take that away from me. Not yet.

Yabair didn't say a word all the way over to the Stronghold's Gate, a towering arch carved out of the side of the mountain and banded with gleaming strips of hammered steel. Even when we set down in the open lot across Siegebreaker Square, he didn't do more than gesture for me to get out and follow him. The dwarves officially acknowledge the Dragon's authority, but they don't allow flyers in their halls, so we had to leg it from that point.

I knew the way to the Gütmanns by heart, of course, and every step that took us closer to their home filled me with just a little more dread. By the time we reached the door to their home, I'd been topped off. Walking into their entrance hall and seeing the bodies there made it overflow.

I had to sit down on the cut-stone floor, or my legs would have given out for sure. I couldn't find a spot clear of blood, though, so I went back out into the wide hallway that led up to their home and slid to ground there instead. Yabair, to his credit, gave me a few minutes to compose myself before he came to retrieve me again.

That was more consideration than the elf had shown me in all the years I'd known him, and that scared me as much as anything. Every moment I sat there, I imagined worse and worse horrors awaited me within. By the time Yabair tapped me on the shoulder, I almost jumped out of my skin.

"Will you be all right?" he said. He didn't show any concern for me in his voice, just a worry that I might foul up his crime scene. That gave me enough courage that I could help myself to my feet.

"Did anyone survive?" I asked.

"I had hoped you could tell us."