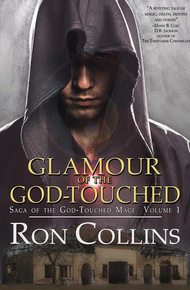 Ron Collins is a best-selling Science Fiction and Dark Fantasy author who writes across the spectrum of speculative fiction.

His latest science fiction series, Stealing the Sun is available from Skyfox publishing.

His fantasy series Saga of the God-Touched Mage reached #1 on Amazon's bestselling dark fantasy list in the UK and #2 in the US.

He has contributed nearly two hundred short stories to professional publications such as Analog, Asimov's, and several other magazines and anthologies (including several editions of Mercedes Lackey's Valdemar world and the Fiction River Anthology Series). His short fiction has received a Writers of the Future prize and a CompuServe HOMer Award. His short story "The White Game" was nominated for the Short Mystery Fiction Society's 2016 Derringer Award.

Glamour of the God-Touched by Ron Collins

A mage's apprentice.
Sorcerers on the hunt.
Unnatural magic of devastating power.

Garrick is a mage's apprentice, soon to be a full-fledged sorcerer. The course of his life is clear—he will be an apprentice, a mage, and then a superior. But a tragic accident finds him wielding a god-like power over life and death, and as rumors of mage war grow stronger around him, he learns his future is not fated to be as simple as he dreamed. Glamour of the God-Touched follows Garrick as he discovers the forces behind his new magic. The lessons he learns and how he deals with them will threaten the very nature of who he is.

I handed Ron Collins his Writers of the Future trophy on a glitzy stage in 1998, and I've watched his career ever since. We have crossed paths at numerous conventions and writer's workshops, but we reconnected more clearly in the last few years when I bought a wonderful story of his for my Pulse Pounders anthology (WMG), and then another one for Pulse Pounders: Adrenaline, and I commissioned a new story from him for my Rush-inspired anthology 2113. When he told me he had an appropriate work for the Epic Fantasy bundle, I knew I had to include it. – Kevin J. Anderson

There was so much Garrick did not know about himself.

He didn't know where he was born. He didn't know everywhere he had lived—though his earliest memories included a long journey in a rickety wagon. Garrick couldn't remember if his mother had always been angry, or if she had just been worn down by the never ending stream of burdens put upon her by those she worked so hard to serve.

He remembered sleeping in dirty alleys and drinking milk cut by rain water. He remembered a blur of boarding houses, shopkeepers, and manors.

He knew that, when he was perhaps six years old, his mother had finally given up and sold him to Baron Alzo Fahid, a jeweler in Dorfort. Fahid was a loud man with a wicked reliance on drink. He beat Garrick whenever his business lost money, he beat Garrick whenever his mistresses complained about the grime of their work spaces, he beat Garrick—it seemed—whenever the wind shifted to the north. But Fahid was also a gambler and, as gamblers will do, he eventually came to owe a Torean mage named Alistair compensation. In the time it took the men to nod their heads, Garrick was consigned to the mage's manor.

At first Alistair's home had seemed a dark and evil place.

And Garrick found that Alistair's forms of discipline—being made of arduous tasks such as scrubbing the floors or cleaning Alistair's beakers and flasks to make them ready for tomorrow's castings—were longer, harder, and arguably far more painful than the baron's simple beatings.

The mage superior proved a patient master, though, and Garrick grew to appreciate both the solitude and the structure of a Torean mage's life. A wizard was intruded upon only when a client needed to boost harvest, mend an unmendable, or scry whatever was needed to be known about a lover, an enemy, or even the occasional ally.

As he grew older, Garrick saw how Alistair maintained an air of mystery about himself that was thick enough to ensure the rest of Adruin would leave him alone. Garrick liked that. He enjoyed that Alistair created anxiety in his clientele—the idea that he could master something so difficult for others to comprehend that they would steer clear of him just to avoid dealing with it. It made him feel unique. It made him feel like he understood things about the world that common people walking the streets could never manage. It helped him forget that only a few years prior Garrick himself had walked those very streets without even a pair of shoes to protect him from the dirty cobblestones below.

He could see himself living a Torean's life—fully occupied, yet alone at the edge of the world. So, when Alistair said he would cast the spell to trigger Garrick's full link to the plane of magic, that by summertime Garrick would be a full mage, he had been excited beyond hope.

It meant he would be his own master, no longer be tied to anyone else. It meant that as long as he lived, Garrick would never again be in the service of any other man.