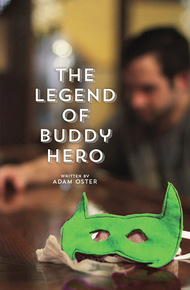 Originally hailing from Columbia, SC, Adam lives in Eau Claire, Wisconsin with his gorgeous wife and three adorable kids. He spends a lot of his time trying to figure out what part of this world he'd like to visit next.

When he's not traveling or writing books, he's watching his kids and dreaming up further tales of adventure, both for the page and his family.

The Legend of Buddy Hero by Adam Oster

Buddy Jackson is the world's greatest superhero. He just doesn't know it.

He's unemployed, a drunk, and has a tendency to go weeks without showering; yet Buddy Jackson may be the only person capable of saving the world from total destruction.   Once convinced to leave the comfort of his bar stool, Buddy battles tentacled bug-monsters, finds himself on the run from shadowy government officials, and teams up with a super-powered mafia. This adventure leads him to a final confrontation with his past self's arch nemesis, the evil minister who goes by the name of Dominion. He is hell-bent on destroying Buddy and the world which loved him. The last time this superhero and supervillain crossed paths, the entire course of history was forever changed.   Buddy is now left with two options, live up to the legend he supposedly created and once again don the bright-green spandex, or allow the damnation of all mankind.

Buddy woke with a start. The pain rang through his skull like a jackhammer as the world suddenly came rushing in around him. He struggled not to cry out in agony. He had become accustomed to his morning hangovers. This was not one of them.

He rubbed his eyes, not sure which was worse, the migraine which had suddenly formed in his brain or the fact that he was now in the midst of yet another morning. Buddy had a long-standing feud with mornings.

He looked around the room and found himself lying on the cot Maggie left reserved for him in the back of her diner. This meant he had once again been dragged from his bar stool to the dry storage room. If he wasn't careful, he might end up calling this place his home.

The room was a mess. Buddy laughed to himself, envisioning the fight which must have occurred here as his sister tried to convince him to rest. He kicked a few cans of beans off the cot and returned his head to his pillow.

His head continued pounding as though his brain was punching at the walls, trying to escape the torture he insisted on putting it through these last five years. He considered a change in his nightly beverage choices, yet just as he neared a resolution on the matter, there was a knock at the door and the idea floated away. Maggie entered the room with a cup of coffee in one hand and a danish in the other.

"Hey Buddy," Maggie said. She used her shoulder to turn on the light. The sudden shift in brightness caused Buddy to groan in pain and roll over to hide from the day. "Ah, come on kid, it's a new day. Gotta wake up."

Maggie placed his breakfast on the floor and sat down next to her brother. He tightened his cotton cocoon around himself, pulling his head under the sleeping bag as he did so.

"Awww. Is da poor wittle baby too hung-ovah dis morning?" Maggie joked as she poked at Buddy's side. "Did he have a few too many cocktails before he went beddy-bye?" He responded by curling himself further into a ball.

"Alright, kid," she said as she bent over and picked up the mug of coffee, "if you want to do this the hard way." Maggie lifted the mug over Buddy's head and began slowly tipping it. Buddy turned his head to see what his sister was up to just as a single drop fell from the cup narrowly missing his barely exposed eye.

"Okay, okay," he said, as he struggled to unwrap the sleeping bag from around him. "You win already, enough with the coffee-boarding."

Maggie returned to her feet. "That was an impressive binge you pulled off last night. I don't think I've ever had to drag you back here before closing." She smiled as she spoke. Maggie could say anything with a smile. This morning, like most, it said, "I wish I knew why you did this to yourself."

Buddy struggled to roll off the bed in a dignified manner. "Well, we were celebrating, you know? Had to make sure we did it right." He found that as his body became rounder, it became increasingly impossible to roll onto his side in the morning, or at any time of day.

"Who was celebrating? You and Sal? You do realize Sal doesn't drink anything except non-alcoholic beer, right? Plus, why would that old coot care how long you've worked at FSS?"

It was even more difficult to swing his legs over the side of the bed to sit up. He finally managed to do so, letting out a loud groan as if his body needed to release the air from inside before allowing him to attain a position other than lying. He sat up, put his hands to his face and continued to wipe away the remnants of the previous evening.

"Everyone was celebrating, sis. Me, Sal, you. . . that guy with the whatchamawhosit that kept doing that thing."

"Right, that guy," she humored. "How could I have forgotten him? Remind me, how long have you worked for Flores now?"

"Right, congrats," she laughed and handed him the coffee and pastry from beneath her, "I got you something. I hope you like it."

"The Official Maggie Jackson Hangover Treatment? It's just what I wanted!" Buddy laughed.

"So, you doing alright this morning, champ? Or am I gonna have to take you in to get your stomach pumped?"

"Better than ever, sis," he lied as he took the dishes out of Maggie's hands and sat them on the cot. "Thanks." He picked up the coffee mug and took a sip. "You have a good night?"

"As good as could be expected, considering," she replied. "Anything else I can get you?"

"Alright. Well, I've gotta head up front and start cleaning the mess. I know you've got to go to work today, but I could really use some help getting things back in order when you have the time." Maggie left the room.

"What'd I break this time?" he yelled after her. Maggie laughed and continued on her way through the kitchen.