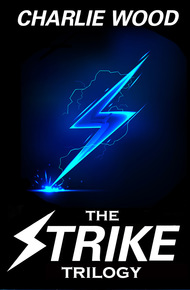 Charlie Wood lives with his wife, Kate, in Massachusetts. Along with The Strike Trilogy, he is the author of The Journals of Kara and Jason. He enjoys movies, comic books, and the Boston Red Sox (yes, even though this is written in July, 2015.)

The Strike Trilogy by Charlie Wood

Tobin Lloyd's life is perfect: he's a senior at Bridgton High, he's one of the funniest kids in school, and his only worry is whether or not his latest prank is going to result in yet another detention.

But when he wakes up in the world of Capricious, a place where superheroes are real and attacks by super-villains are just another hassle of living in the city, all of that changes. Suddenly, Tobin's last year of high school is not going as he expected.

Far from home and pretty sure he's gone insane, Tobin must join a strange group of companions (including a beer-drinking dog and a genius, three-foot-tall robot) as he desperately tries to find a way back to Earth. However, that may be even harder than Tobin knows: a mysterious super-villain named Vincent Harris has big plans for the planet Earth...and Tobin is the only person standing in his way.

Something grabbed Tobin's arm. He looked there to find a six-and-a-half foot tall, blue-and-white Siberian husky. It was standing like a man, and wearing a cowboy hat, a brown leather jacket, and blue jeans. It was also wielding a very large gun.

The dog pushed Tobin in front of him and they ran across the field.

"What—what is going on?" Tobin gasped. "What are you?"

"I'm a talking dog," the talking dog replied. "Head towards that sky-ship."

Tobin looked ahead and saw a gleaming silver jet parked in the grass at the other end of the field.

"Why are we running?" he yelled.

ROAR! Another winged-dinosaur emerged from the forest, shaking the trees with its deafening bellow. Luckily, the boy and the dog were only a few yards away from the silver aircraft, and they ran into a door that slid open on its side.

Inside the craft, the dog ran into the cockpit, leaving Tobin behind in the cabin. The boy was surrounded by three rows of empty seats.

The dog sat in the pilot's seat, pushing a series of buttons on the control panel. "Recognize that guy?" he asked.

Tobin turned and saw Orion sleeping in a chair. "Yeah?"

"You came here with him. You're lucky I found you before they did."

The dog turned around. "You serious?"

The sky-ship shook violently. Tobin looked out a window; the maroon-colored dinosaur had now grabbed one of the ship's wings with its jaws.

"Ah, krandor," the dog snapped, spinning back to the controls. "Hold on tight, kid."

The dog pushed a big red button, and a burst of blue fire shot out from the ship's wing, surrounding the dinosaur. The beast roared and let go of the wing, allowing the ship to take off.

Tobin fell backward, knocked over into a chair as the craft zoomed upward. Nearby, Orion awoke from the commotion, sitting up and looking around at the shaking, trembling sky-ship. Then he noticed Tobin.

Gripping the armrests of his chair, Tobin watched as Orion walked to the cockpit.

"I got your call, and as soon as I got here, two blood birds were approaching. One of them is on our butt right now."

Orion looked to a monitor in the cockpit; the dinosaur was flying through the air and following them.

"Send me up," the old man said, walking to the back of the ship.

"Are you sure?" the dog asked. "You're pretty wiped out, O, you should probably just—"

"Send me up," the old man repeated.

The dog shrugged. "Okay, you got it."

Walking past Tobin, Orion took a quiver of arrows from the wall, put it on his back, and then stood in the center of the cabin. As he crouched down, he pulled a series of metal straps across his boots. The straps were attached to a silver plate in the floor.

"Tobin," the old man said, "this is my friend, Keplar Costello. He's the pilot and owner of this ship we're in, the Sky-Blade. Keplar, Tobin. Tobin, Keplar."

Tobin had a death-lock on the armrests. "Oh. Okay."

Orion finished strapping his boots to the silver plate and stood up. "Tobin, I've got a hell of a lot of explaining to do, I know, but I can't really get into it right now." He took an arrow from his quiver and strung it in his bow. "I'd just really rather not start explaining everything while we're being chased by a dinosaur."

The old man looked into the cockpit.

Reaching forward, the dog pulled a lever, and suddenly a hatch opened in the ceiling above Orion, sending cold air rushing into the ship. The old man was then raised upward by a hydraulic lift, which pushed him and the silver plate up through the open hatch and out onto the ship's roof. When the old man was outside, the hatch closed.

Tobin stared at the ceiling. He had no idea what was going on.

Tobin walked into the cockpit. On a monitor on the dashboard, he could see Orion; the old man was strapped by his feet to the top of the Sky-Blade, bracing himself in the wind.

He could not believe he once did this for fun.

With his old knees buckling, Orion stood atop the Sky-Blade, trying to keep his balance. When he felt halfway confident, he looked up and aimed an arrow at his target: the gigantic, blood-colored dinosaur flapping its wings above him.

The lizard looked down at the ship and let out a tremendous ROAR!, and Orion had to duck when it swiped its spike-covered tail at him. Crouching, he restrung his arrow, but his fingers slipped, and the arrow went flying away.

"Dammit!" he spat. He reached for another arrow, but then saw the lizard roar again. This time, a wave of fire burst from its jaws, and Orion had to fall forward to avoid the flames.

Lying on his stomach and breathing heavily, the old man grabbed a pipe on the ship's roof for support and looked up, carefully watching his enemy. The lizard was swooping upward now, readying itself for another attack. The old man was running out of time.

He stood and steadied himself. He turned his eyes skyward and pulled back an arrow. The arrowhead erupted with red fire. Carefully aiming the weapon, the old man let go of the string and let it fly.

With its enormous jaws clenched, the blood bird's body dropped, its head bowed. Soon, its leathery wings stopped flapping altogether, and Orion watched as it whistled past the sky-ship and plummeted toward the ground. It crashed there at a violent speed, sending up a plume of dirt and rocks into the air. When the debris cleared, Orion saw the dino lying there in a crater, hundreds of feet away, never to flap its wings again.

The old man sighed. As he put his bow into his quiver, he and the platform were lowered back down into the Sky-Blade.

"Yee-ha!" Keplar shouted, as Orion and the platform arrived in the cabin. "That was awesome, O! I haven't seen a blood bird fall like that in years! That…was…the…krandor!"

Orion unlatched his boots from the plate, collapsing into a seat. His arms trembled as he placed his bow on the ground next to him.

"It might have been the 'krandor,' but it took a hell of a lot out of me. Dammit, I'm getting old."

Orion lay back and brought his arms across his stomach, Tobin was shocked to see that the old man's fingers were curled and smoking.

"Keplar, take us back to my place," Orion said. "We can't stay there long, but there's some things I need to get before we go. They're already looking for us. We have to keep moving."

Keplar set the course on his controls. "We're on our way, O. Get some rest."

The old man reached for his bow, so Tobin picked it up and handed it to him. The old man turned and looked at the boy.

"I'm sorry, Tobin. I'm sorry this has happened to you. I tried so hard to stop it. I'm sorry."

Tobin was confused. The old man turned to the wall and closed his eyes.