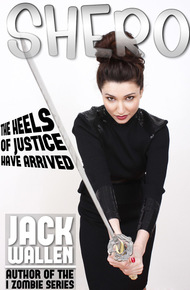 Shero is not your ordinary superhero … unless you consider a cross-dressing superhero normal. Besides having to deal with the every day challenges of evil villain-dom, Shero must combat broken heels, runs in his stockings, chipped nails, and the prejudice of public opinion.

In this first installment Shero finds the perfect black dress, a possible lover, a deadly shade of fingernail polish, some nasty, nasty foes, an internal superhero political war, and a narrator full of attitude.

Caution: You may find yourself yelling "You go girl!" which could certainly lead to public humiliation. You've been warned.

A swift bolt of blue lightning crackled past Shero as he gracefully swept his right leg across the plane that intersected Melt's face. It connected, and Shero was able to maneuver his body out of the path of the electricity.

"Hey now, watch your aim, big boy. You rip a hole in this new dress, and there'll be hell to pay!" Shero yelled, unaware that Melt was charging up another round of hellfire.

"Shero, look out!" Lightning Rod screamed at the top of his lungs.

Just in time, Shero glanced Melt's way, saw the heatwave coming, and ducked to the side. He felt the heat like a too-long stay in a tanning bed. Shero became instantly covered in sweat.

"You're lucky this dress is sleeveless, you whore!" Shero ran at Melt full speed. No one would have ever guessed a man in three-inch heels could burn pavement. He balled his OPI-polished nails into a fist and connected.

The sound was like a chubby kid sitting on a box of Cap'n Crunch.

In the blink of an eyelash, Shero had his katana out. Silver and chrome flashed like a smile on a toothpaste model. He held his blade perpendicular to the ground, pointed directly at Melt. Melt, in return, boiled up another ball of molten goo. The third point in the triad, Lightning Rod, arched his namesake from palm to palm.

In a silent, motionless moment, testosterone levels blew through the roof. Each man stared at the others. Two on one, and the one was sure he could take out the two. Before he could say Manolo Blahnik, Shero's katana sliced through the thick air toward Melt. As the sword neared the abdomen of the VILE agent, to Shero's astonishment, it melted away. In a wash of liquid metal, Shero was unarmed.

Seeing his partner in possible trouble, Lightning Rod seized the opportunity to blast out with enough voltage to light up Soho. The bolt tore through the space between Shero and Melt and ripped a hole through a billboard cheerleading the President's energy policy.

So close, and without his sword, Shero felt the pressure mounting to strike quickly. It was time to unleash the Crouching Geisha, a move he had been working on for weeks in the Sim-rooms. He dropped to a crouch with his right leg sticking straight out to the side and used his fingertips to keep himself from tumbling forward. He sprang up in the same position. As he began his descent to the ground, he altered his trajectory so that he would be within striking distance of Melt's back. Once in range, his right leg bent swiftly, and the heel of his Jimmy Choo connected with Melt's back. To Shero's dismay, he realized that Melt had full body armor covering his torso. The heel of his right shoe broke off and landed on the ground with a light, wooden tink. Shero landed as gracefully as he could with one broken shoe. He stood and stared at the fragment of his battle-wounded shoe. A nasty silence descended upon the isolated war.

He pulled off the remains of the shoe and grimaced. "You son of a bitch! These heels cost me nearly three hundred dollars!" Shero's voice was Kathleen Turner husky.

Shero stared at Melt, the sides of his jaw pumping in and out. Lightning Rod had seen that look before. It wasn't good. Had the two members of SSH not been instructed to take down Melt, Lightning Rod might have told Melt to run as fast and as far as he could. Hearing Melt mock Shero was probably the best thing that could happen at the moment.

Mock on, you narrow-minded man. Mock on.

And then, within the span of a heartbeat, Shero catapulted himself to Melt's backside and landed blow after blow into his kidneys and spine. Melt tried to spin around, but Shero clamped an arm around his neck to restrain him—cutting off his air supply in the process.

Melt held up his arms, and a brilliant glow began to form. Shero knew that meant more than frizzy hair for the next week. To avoid the volcanic facial, Shero kicked his legs into the air—while still grasping Melt's neck—and forced Melt face first onto the ground.

"How do you like my sissy fit now?" Shero punctuated his question with a knee into the back.

As Melt went down, he managed to pull in just enough air to speak. "SSH will soon crumble under the vengeful hand of VILE!" His voice was raspy and strained. As soon as the last syllable hissed from his lips, Melt was rendered unconscious.

Shero stood, pulled off his other shoe, and started to chuck it at Melt's limp body.

Lightning Rod was there in an instant. "He's already down." Lightning Rod's calming voice eased Shero's flexing arm. "Besides, we can fix that shoe."

Shero opened his mouth to argue, but Lightning Rod quickly threw up a finger of silence. "We can fix it."

Shero grabbed the broken shoe and its matching heel while Lightning Rod sent word to the Lightning Bug pilot to drop down and collect them.

"Couldn't you come up with a better name than the Lightning Bug?" Shero chided.

Lightning Rod laughed. "This coming from a man who fights in evening wear?"

"You're just jealous because I can pull it off."

The ship silently landed on top of the parking garage that had served as the battleground. Lightning Rod hoisted Melt onto his shoulder.

The two superheroes were glad to be returning to the Society of Superheroes' headquarters.

All in a day's work.