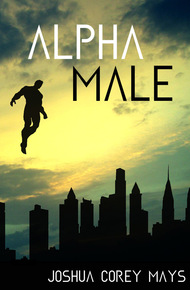 Joshua Corey Mays has been dabbling with the word for a few years now. Pulling from many influences, Joshua has carved out his own style using writers like Bukowski, McMurtry, McCarthy, and the pulp authors of the 20's and 30's to guide his hand. A prolific author, he has written five books to date, and isn't constrained by genre. He writes with a passion about things that are passionate to him. He is a rising author to watch over the coming years.

Alpha Male has grown accustomed to the reverence and love from the people he protects. Over the years though, these people have grown complacent, forgetting about all this lone hero has done for them. Some still love him, but most see him as little more than a celebrity to gawk at and hold to an unreasonably high standard. That is, until a super villain shows up. With their city locked down in terror, the people turn to their hero once again. But, Alpha Male is used to stopping thugs, and carjackers, not super villains. Can he stop Omega Man before his city falls apart?

The woman stood on the edge of the building, looking down at the vast city below. The great expanse of towering skyscrapers and asphalt streets could be seen far into the distance. This was her home; she had been raised here and this view never failed to take her breath away. She let out a sigh of relief as she edged closer to the end of the roof. With the railing pressing into her stomach, she looked down.

It was a straight shot thirty stories down to the ground floor. The wind gusted up, blowing her black dress tight against her skin while the excess flapped in the breeze. She took a few steps backwards and sat on the ground with her legs crossed. Taking off her red high heels one at a time, she held one up and examined it.

He loves red, she thought, teasing a red earring with her free hand. Putting the shoe down, she opened up her purse and checked her face with a small mirror. Her lips were full, pouty and covered in bright red lipstick. She tried to fix her hair, but the wind was too strong and she finally gave up. A part of her felt she looked like a whore, but that was what he liked. She wanted to look good for him because it wouldn't be long now before he showed up.

As she examined herself in the mirror, her phone went off. It buzzed and buzzed, vibrating until she finally picked it up. Julia Webb it read. Opening up the flip phone, she said "Hey baby", speaking up over the loud gusts of wind.

"Oh, no, I'm downtown," she said, looking in the mirror again with the phone nestled against her shoulder. "I probably won't be home until later tonight."

"No! I promised you I wouldn't do that anymore, remember?" she said, inspecting her teeth.

In the distance, she saw something come up over the top of a tall building. A speck against the falling sun, she saw him soaring through the sky. He flew over the city, heading towards her, just like he always did when on patrol. She had his schedule down pat, and this was where she always waited for him.

She slipped the shoes back on and stood up next the edge. She placed the phone in her purse, took out some lipstick, and tucked the purse beneath her arm. After applying the lipstick, she smiled and waited until she could see the red of his costume. He was close now.

Taking a deep breath, she crawled over the railing and leapt from the building. Her body fell so fast that she couldn't hear anything. The wind around her was roaring as she plummeted down towards the concrete below. Her breathing stopped as her heart pounded in her chest. This was always her favorite part. That moment just before he caught her. She knew he would scoop her up and they could make love on the roof top, just like they had that time, so many years ago.

And just like she imagined, he caught her. She felt the quick dip of his body as he compensated for her velocity. When she did this the first time, he explained how she would die if he just caught her. Such a gentleman, always looking out for others. He was a true hero.

"Oh, Alpha! I knew you would catch me!" she said, throwing her arms around his neck.

"Lillian, we talked about this," he said, in the stern voice. "You have repeatedly put your life in danger for this ridiculous stunt. You know what the doctors said if you did it again."

"I'm sorry, but I think it's in your best interest if you spend some time with the doctors at Bellview. You're sick, and you need help!"

"But…who's going to take care of my girl... our girl?" she asked, almost in tears.

"I know someone at the child services office," he said. "I'll make sure she gets placed somewhere safe until you are better."

"No! No!" she said, pulling her arms away from his neck. She began pounding on his chest instead. "You can't do this to me! I love you!"

No matter how hard she fought and screamed, he didn't divert his path. She saw the hospital come into view, and stopped fighting. Instead, she cried. Thick mascara ran down her face, chasing the unabated tears that outlined the red of her lips in black.