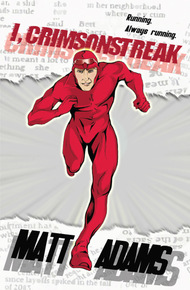 A resident of Indianapolis, Ind., Matt Adams writes superheroes, sci-fi, and a touch of the fantastic. Once, long ago, he planned to patrol the streets as Batman but ultimately decided writing was safer and more cost-effective. He was only half right.

When he isn't working on his next book, Matt watches a lot of Indianapolis Colts football and eagerly awaits the next release in the Marvel Cinematic Universe. He fervently hopes DC will get it right one of these days.

I, Crimsonstreak by Matt Adams

Framed by his father, "reformed" supervillain Colonel Chaos, super-speedster Chris Fairborne, AKA Crimsonstreak, is sent to the Clermont Institution for the Criminally Insane. A hero surrounded by dastardly inmates and heartless guards, Chris struggles to keep his wits about him, until the arrival of some unexpected new "guests" at the facility provides him with a means for escape. Once out, though, he discovers that the world he knew is gone, replaced by a "utopian" state run by none other than Colonel Chaos himself.

With the heroes of the world locked away or fighting in a disorganized resistance, Crimsonstreak teams up with a snarky British butler and a teenage superhero-to-be. Together, the unlikely (and bickering) allies must take down Crimsonstreak's dad and set the world right. Not easy when your only powers are super-speed and looking good in spandex. But hey, someone's got to save the world.

The Clermont Institution for the Criminally Insane:
Serving evil-doers and those in need since 1972

Or an innocent victim of gamma rays.

Or an exceedingly rich playboy with one heckuva secret.

But that's not the case.

I guess you could say I'm in the family business. Dad's a hero. Mom's a hero. At least, they both were.

The world went wonky a long time ago and I can't do much about it.

Oh, I've tried. Thirteen different escape attempts with varying degrees of non-success. You'd think each time I'd get a little closer to getting out of here. The last time I tried, the guards stopped me before I even took my first step. Damn minders, treating thoughts like they're rabbits you pluck out of a magic hat.

By societal norms, I'm a "psycho killer" and a "danger to society."

They—I mean the pleasantly surly and sadistic guards—took away my uniform and stuffed me in a straitjacket. I'm buried 50 feet underground in the deepest, darkest, coziest level of the Clermont Institution for the Criminally Insane.

My neighbors are some of the biggest, most despicable pieces of human filth imaginable.

No escape. Nowhere to go.

I ask myself at least ten times a day how I got here. Pin the whole thing on my father.

Oh, sure, I know what you're thinking. Young men always blame their fathers when life just doesn't go their way, and there's a kernel of truth to that. But most young men don't have a supervillain for a father. Now, Dad reformed a long time ago, marrying my mother and doing away with his evil schemes. That's what he told us. It even seemed to stick for a while. He dropped off the FBI's Most Wanted List. The president issued a pardon for that whole "hold the world for ransom" business. He went from reviled to beloved in the time it takes me to run a marathon at Crimsonspeed.

You can thank Mom for that.

She was special, too. Really special. Dad always told me she looked great in tights. Yeah, that's right, bring on the childhood trauma. Dad was smart, Mom was wise. Dad was powerful, Mom was strong. Perfect complements.

Dad had to work at it.

Mom wasn't enamored with the idea of hooking up with a megalomaniacal madman who perpetrated at least seven different plots to take over the world. I mean, she's the one who finally managed to capture him, token thanks due to the Heroic Legion. Newspapers coined the term "supervillain" specifically because of my dad. But somewhere, deep down, she found a seed of goodness in him.

Oh, she resisted, that's for sure. But you can't stop the north pole of a magnet from attaching itself to the south pole. It just doesn't work like that. They fell for each other, got married, and then decided to celebrate their nuptials by fighting as a team.

They weren't the "Amazing What-Nots" or the "Dynamic Dogooders" or anything silly like that. They were simply themselves. When the world needed them, Colonel Chaos and Miss Lightspeed stepped up to the task. And boy, did the world need them!

Some evil industrial type named ShadowSmith blanketed the world in darkness. Mom found the machine; Dad turned the lights back on.

One of my favorites: the time a contingent of "superheroes from the future" fooled the entire world into helping them. They were from the future, all right. But they certainly weren't heroes, just some schmucks with iPad 2600s. In that case, Mom was the voice of reason; Dad was the voice you could hear.

So, yeah, my parents saved the world a few times. It's what heroes are supposed to do. Not too bad for a reformed supervillain and his wife, right? They made the world so safe they decided to bring a child into it.

Bingo: that's me, living right in their shadow.

"Hey, see that kid? You know who his parents are?"

"I didn't know Miss Lightspeed and Colonel Chaos had a son!"

That's how I grew up. It was like being Frank Sinatra's son, kidnapping attempts and all.

Mom moved faster than light, Dad thought even faster. Don't get me wrong; both of them were sharp. But if you've got a question about quantum physics and the space-time continuum, talk to Dad. If you're looking for a six-letter word for "a flower that's also part of the rainbow spectrum," ask Mom.

Need a brand-new baseball bat? Not enough money in the budget, Mom would say. Make do with last year's. Besides, it worked fine, right? Dad would go to the sporting goods store, scan it, and then figure out a way to make a better bat. Of course, the raw materials for his bats cost a lot more than just buying one at the store.

Need a new guitar? A sonic guitar would be cool, Dad would say. Then Mom would roll her eyes, wait a couple of days, and take me to the music store. She knew I didn't need a sonic guitar that would overpower everything, but a little musical enrichment fit her budget. Too bad I didn't stick with the lessons.

They were cool parents, each of them in their own way. I loved them dearly.

Of course, as I grew up, they got a lot dumber. Dad's experiments seemed stupid, and Mom's "lightspeed" seemed slow. Typical rebellious-teenager stuff. Everyone's been there.

I wised up after a while.

Unfortunately, it was too late.