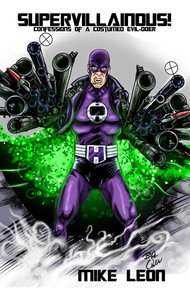 Mike Leon lives in Cincinnati, Ohio, where he becomes increasingly reclusive each year. He has a cat and a bunch of guns. He writes the world's most ridiculously metal fiction and you can follow him on Twitter @TheMikeLeon.

Supervillain. The very word immediately conjures up images of cackling madmen waving death rays as they rant and rave about their maniacal plot for world domination. But there is more to professional evil - so many questions left unanswered by movies and comic books. What kind of salary do henchmen get? Where do all these super gadgets come from? How come good guys never use the door? One man has the answers. Mike Leon spent months following Baron Hammerspace during his rise from C-list rogue to A-list arch-nemesis of the most powerful heroes on the planet. This is the startling and true story of those events.

I'm sitting in the Mayor's office in New York. Well, it used to be the mayor's office. Now it belongs to Hammerspace. He lounges in a big leather chair with his feet on a desk that still harbors Mayor Bloomberg's metal name tag.

"Mayor Hammerspace just doesn't sound threatening enough. Mayor Hammerspace is a guy who invests in low risk mutual funds and walks to the other side of the street when he sees a black guy coming. It doesn't say ruthless dictator who holds the city within his iron grasp. That's what I am. This is my iron gauntlet of pain," he says as he holds up his right fist to demonstrate for me. He has been pondering this bizarre title situation since he took over the Mayor's office two days ago, in a coup that was carried out so easily the former city hall administration should be ashamed.

It went down like this: In the middle of a press conference in which the Mayor was all too happy to discuss General Welfare's disappearance rather than the specifics of the social equality legislation he was supporting, Hammerspace smashed in the doors to the press room with the Mallet of Malice and entered. The police were unable to stop him, largely because he had a nuclear explosive which he threatened to detonate if they tried anything, and he simply pushed the Mayor away from the podium and declared himself the new ruler of New York.

"I got the bomb from soviet defectors a few years ago. Where else do you get a nuclear bomb?" he answers when I ask him how he got his hands on the weapon.

Immediately after kicking the mayor off stage Hammerspace began making new laws and regulations right there at the podium. "For my first act as ruler of this city, I declare that every resident shall be taxed on forty percent of their income! If you do not pay your taxes you will be executed. In fact, all crimes committed in the city will now be punishable by death! Fear me, city of New York! Fear the asphyxiating grasp of despotism that is my rule!"

And so Hammerspace is still lying back in his chair when Fumigator walks into the office with surprising news. "They love you out there," he says. Hammerspace is taken aback, and frankly so am I.

"What?" he says, sitting up in his chair.

"Yeah. They're partying in the streets."

"Why? I burden them with the shackles of oppression and obscene taxes!"

"Well, no. Not really. You actually lowered the taxes. They were paying like sixty percent before."

I knew this before. But I didn't have the heart to tell him. He seemed so excited about his despotism.

"What about the mandatory death penalty for all crimes? That has to have them pissing themselves."

"They're okay with it. The city had kind of a crime problem before so, you know. They're already talking about turning the prison into a conservatory or something."

"I really need to kick it in gear with the evilness here. What about something with abortion? People hate abortion. What about forced abortion of minorities?"

"But that will really piss people off. What if they revolt or something?"

"We'll confiscate all the guns first."

"I think New York already has a gun ban."

"Does anyone else see the irony here?"

Seconds later, a crimson colored glove shatters through the wall, only a few feet from the door, and into the room steps the famed and elusive Scarlet Avenger. Even the few existing photographs of her could not have possibly prepared me for this. In person, the Scarlet Avenger burns with an aura of intensity hotter than the sun. The movement of her hips as she walks is like the violent thrashing of an ocean vessel in a tropical storm. Her bouncing red hair shimmers like diamonds in an inferno. Her long slender legs lift the feet of a princess and each time they crash back down the earth quakes beneath them. Her perfect figure is the envious rage of every supermodel enveloped in crimson shrink-wrap. Briefly she turns her head and I dare to look in her eyes for a fraction of a fraction of a second before the most furious intimidation I have ever known threatens to tear my soul apart.

Hammerspace already has the suitcase nuke in his hand and he's brandishing it for her to see. "Stand back, Scarlet whore. Even you can't survive a nuclear-" Then she kicks him in the nuts and takes the suitcase away.

She turns to me with a glare of focused rage and for the first time I hear her voice. She says "who the hell are you?" with a thick English accent that allows her to sound pissed off and yet still more refined than the classiest debutante. The Scarlet Avenger is English? There are British superheroes? Instead of answering her I'm thrown by this notion for a moment. Then I realize how ignorant it is. She has to repeat herself. This makes her a little less refined.

I tell her I'm an embedded journalist reporting on supervillains for Trigger magazine. She drops her guard, confused and says "Well, that's just ace then. I'm glad rock and roll magazines are still busy promoting positive role models." I think she's being sarcastic. A moment ago I couldn't look at her, but now it's hard not to.

She punches into the suitcase nuke and rips out a big chunk of colored wires as she approaches my chair. She drops the clump of wires to the ground and with her free hand reaches into her cleavage to fish around for something. "You know, I'm promoting my new album," she says as she pulls a red business card from her costume, which upon closer inspection, is some sort of ultra glossy rubber. "I don't usually do interviews, but maybe that can change."

Across the room, unbeknownst to her, Hammerspace peels himself up from the floor and draws an anti-tank weapon from his jacket. He takes only a second to aim as I curiously examine the Scarlet Avenger's business card. I note that the card lists contact information for an agency that represents her, but not her own info.

Hammerspace pulls the trigger and his bazooka emits a deafening ka-pow which echoes throughout the building and hurts my ears. All of the windows in the room shatter as the Scarlet Avenger catches the shell in her hand with all the difficulty of a major league infielder in a softball game. She puts a hand on her hip and smiles back to him. "That was quite a googly," she says as she tosses the impacted artillery round over her shoulder. "Now tell me what you've done with General Welfare and I might let you live."

Hammerspace cackles loudly. "Everyone knows you have a strict no-kill policy, Scarlet Harlot. I'll see your bet and raise you dead bystanders." With that he smiles and tosses a plastic explosive out a nearby window.

In a blur, Scarlet Avenger flies out the window in a race to catch the bomb before it lands in the street. Hammerspace turns to me and shouts as he runs from the room. "We have to get out of here! That bought us like ten seconds if we're lucky!"

I chase him down the hallway toward the stairwell. As we're running by the elevator he pushes the button to call it, but he keeps running. He shouts back "Elevators are a terrible escape route, but if you push the button sometimes you can trick a superhero into thinking you're in there." Sure enough, we hear Scarlet Avenger peeling the steel elevator doors open as we're running down the stairs into the basement.

We find Fumigator in the basement and Hammerspace drags him to his feet. Hammerspace yells at him. "We have to go! She's right behind us!"