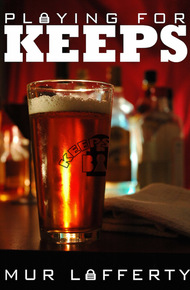 Mur Lafferty is an author and podcaster. She lives in Durham, NC, with her husband, daughter, and two dogs. Building her audience since 2006 with podcast-only titles, Mur has written several books and novellas including Playing for Keeps. Her first professionally published books,The Shambling Guides: The Shambling Guide to New York City andThe Shambling Guides 2: Ghost Train to New Orleansare in bookstores now. She writes urban fantasy, superhero satire, afterlife mythology, and Christmas stories. All of her early works are available via podcast and ebook.

Playing For Keeps by Mur Lafferty

The shining metropolis of Seventh City is the birthplace of super powers. The First Wave heroes are jerks, but they have the best gifts: flight, super strength, telepathy, genius, fire. The Third Wavers are stuck with the leftovers: the ability to instantly make someone sober, the power to smell the past, the grace to carry a tray and never drop its contents, the power to produce high-powered excrement blasts, absolute control over elevators.

Bar owner Keepsie Branson is a Third Waver with a power that prevents anything in her possession from being stolen. Keepsie and her friends just aren't powerful enough to make a difference. at least that's what they've always been told. But when the villain Doodad slips Keepsie a mysterious metal sphere, the Third Wavers become caught in the middle of a battle between the egotistical heroes and the manipulative villains. As Seventh City begins to melt down, it's hard to tell the good guys from the bad, and even harder to tell who may become the true heroes.

The supervillain attacked at the most inconvenient place and time: right on Keepsie's walk to work. She looked into the sky at the costumed combatants and groaned.

"Why did they have to do this on a Thursday?"

Crowds gathered on the sidewalk to stare up at the battle, clearly ignorant of the danger. Not to mention ignorant that they were making her late.

"Oh my God, it's White Lightning!" screamed a woman directly in Keepsie's way, pointing at the sky.

Despite herself, Keepsie looked up. She'd heard of the Academy's newest hero, but hadn't seen him yet.

The sinister laugh of some villain and the deep voice of the hero rang out above the excited crowd. A loud crunch of breaking glass and bending metal sounded above them as someone was thrown through a building. Keepsie guiltily hoped it was one of those damn holier-than-thou superheroes from the Academy hitting a skyscraper.

She held up her hand to block the sun. "Another building to repair."

Another crunch, and several people screamed. Keepsie stumbled as people slammed into her, desperate to get out of the way.

Keepsie had been watching to see if the hero would get out of the building. She grunted in alarm when a massive object ran into her. Her breath whooshed out and instead of falling underneath whatever had hit her; she was airborne, wedged painfully in a strong grip. She winced when she realized she was now five feet from one of the more prominent supervillains.

Up close, her abductor's commanding presence was even more frightening than on television; he was seven feet tall, bald, and handsome in a Harley Davidson riding kind of way. He had a monocle implanted where his right eye should have been, and circuitry glowed under the skin around his neck and jaw line. She had seen pictures, but had never seen him up close: Doodad, Master of Machines. Although he looked as if he could punch out an elephant, she had never heard of Doodad participating in a physical fight. His power was in his brain, and his skill to bend machines to his will.

Doodad's flying crab machine had plucked Keepsie painfully from the sidewalk. When the news had shown pictures of the machine, Keepsie had giggled, reminded of the Jetsons' little hover car. Now, flying above Seventh City wedged in its one claw, it didn't seem so cute. Although the claw pinched her bruised ribs, she clung to it and forced herself not to look down. It wasn't as if she could fly.

On the whole, the villains didn't scare Keepsie, but heights terrified her. Doodad wouldn't drop her; he wasn't into blind terrorist acts like dropping innocents to watch them splatter. He always had a reason for his actions unlike some of the more homicidal villains like Seismic Stan. The wind pulled tears from her eyes and she gulped. At least, he'd always had reasons for his actions in the past.

Keepsie screwed her eyes shut as they gained altitude. Where the hell were the heroes that he'd been fighting? Her stomach turned at the unfamiliar wish for a hero. Or maybe that was the altitude.

Almost as an answer to her question, a booming voice said, "Put her down!"

And then he came; his glorious blonde hair perfectly styled and unruffled by the wind. He had apparently had time to restyle after freeing himself from the building Doodad had thrown him into. The hero filled out a black leotard and tights, his costume completed with a black cape with white lightning bolts covering it. A black mask covered his eyes, but allowed his blonde hair and chiseled jaw to show in true superhero glory. This must be the rookie, White Lightning. He flew, tall and proud, over the rooftops, straight for Keepsie and Doodad.

Keepsie gritted her teeth. Be careful what you wish for. Why did it have to be the rookie? She could have stomached being rescued by the veteran heroine, Pallas.

"Tell them at the Academy, tell her, that if you want to see this woman alive, you'll send me Timson by midnight!" Doodad shouted back.

Midnight? Who would open the bar?

"You'd never drop her, you have too much to lose!" shouted the newcomer. He hovered about thirty feet from the flying crab machine. Keepsie's feet kicked in the breeze and she was thankful she'd worn boots today.

"Lose? What do I have to lose? Family? Job? People that I love? I had none of those to begin with," Doodad said.

The hero scowled at him, and something caught Keepsie's eye over the skyline. A news helicopter buzzed toward them, camera pointing right at Keepsie and her captor.

Good. Go for the textbook response. That'll convince him. This guy was an idiot. Was every other hero busy at the moment?

As the shouting match continued, a low whirring sound caught Keepsie's attention. The claw gripped her somewhat tighter, and she squirmed.

The hero raised his hands to the cloudless October sky and Keepsie realized too late what was about to happen. The lightning bolt snaked down and slammed into the machine, filling Keepsie's nostrils with ozone and her eyes with blinding light. The deafening crack came a millisecond later and Doodad's machine faltered in midair.

The rubber-padded claw squeezed tighter and tighter, causing Keepsie to cry out in pain and struggle against it, despite their altitude. Then it opened.