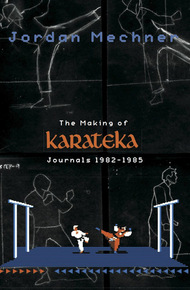 The Making of Karateka by Jordan Mechner

In 1982 -- the era of Apple II and Commodore 64 -- 17-year-old college freshman and aspiring game designer Jordan Mechner began keeping a private journal. This first volume is a candid account of the personal, creative and technical struggles that led to his breakthrough success with Karateka, which topped bestseller charts in 1985, and planted the seeds of his next game, Prince of Persia.

Three years before Prince of Persia was a gleam in my eye, I was a 17-year-old Yale freshman and avid gamer, trying to balance a college course-load with my aspiration to become a real, published game author… and maybe, someday, a screenwriter.

This is my journal from that time — excerpted so as not to strain the reader’s patience, but otherwise unimproved and untouched by 20/20 hindsight.

History at 9:30, Psych at 1:30. In between I went into town and bought the Monty Python and the Holy Grail soundtrack to send to the Lillies, and this notebook. Discussed the nature of the universe with Ben and Rich until dinner.

About this journal: My basic intention is to write down, at the end of each day, what happened — what I did, thought, felt, and so forth — so I can read it, years from now, and remember what it was like.

I think it’s best if I don’t concern myself overly with style. I’ll only get frustrated and quit. The second pitfall to avoid is using this journal as a kind of valve to let off steam — for example, writing 20 pages one night about how depressed I am. I’ve kept that kind of journal before. Rereading it, I invariably get disgusted and throw the notebook away. If I’m depressed, I’ll just say so and leave it at that. Basically, I want to write what I’ll want to read later. I’ll probably get better at that with practice.

In short, I’m not very concerned with quantity or quality; I just want a reasonable entry for every day of my life, starting now.

Qix is a great game. I want to program it for the Apple.

There was an article in Creative Computing about generating pseudo-random numbers — just what I need for Deathbounce!

Scott Barnes from Hayden called. Will they ever publish Asteroids? It’s been over a year — fifteen months — since I submitted it and they accepted it.

Oh well. When I finish Deathbounce and sell it, I’ll be rich and then I can stop worrying about money for the next few years.

Bought a record for the first time in a long time. Vivaldi’s Seasons.

There’s a Deutsche Gramophon and Philips sale on at Cutler’s. I should buy a few more before the sale ends.

I missed all my classes today. Music, Philos, Philos discussion group, Sociology. Shit! What’s the matter with me?

This morning I bought the DOS 3.3 upgrade ($60) and upgraded my system. It is now a 3.3 system. In ten minutes I made the Hayden change (changing the ship from a triangle to a V), missing Sociology (sigh), then worked on Deathbounce.

If you took all the hours I’ve spent on coursework outside of classes in the first 7 weeks of this term, it wouldn’t make 8 hours total. That’s, like, one hour per week. And I’ve missed at least half the lectures. It’s ridiculous. I might as well not be taking any courses. What a waste.

I decided to add a shield to Deathbounce. You have a certain amount of energy (replenished at the beginning of each new screen as well as with each new ship) which normally recharges slowly; thrusting, fi ring, and shield all use up energy. It should be fun. It’s at least original.

Did my laundry. Th ere’s nothing quite like a basketful of hot crackling clean clothes, carrying it back through the cool winter air.

[NY] Last night, walking to Grand Central, I passed a grizzled old salt — not a drunk, just an old, shabby sailor type with a duffel bag. He said “Hey, spare some change for a poor ol’ guy?” in a tone of good-natured humor at his own predicament. I said sorry, and he said “Shucks. OK.”

We were walking side by side. He said: “Y’know, I wish I were your age,” then, like he’d just come to a big decision: “No, hang it all, I don’t. I been through too much. It ain’t easy bein’ young, and that’s the truth.”

It made me kind of curious about what his life had been like.

An artist is concerned with what, a scientist with why. We read a scientific paper and say “Hey, that makes sense. Wow!” We read a poem and say “That’s it exactly. That’s just how it is!”

Which will I turn out to be? Education, heredity, everything seems to point toward science. I’ve never really seriously considered the other option. And yet… Being a movie director. Writing novels. Screenplays. That sounds so appealing.

[Chappaqua] Spent most of the day playing D&D with David. Worked a little (very little) on Deathbounce.

Today I worked out a couple of principles that make arcade games fun.

First, you have to feel in control of your ship/car/man/whatever. So that when you get hit, you say “Oh, shit! I should have thrusted!” (Asteroids) instead of “Oh well, another ship gone. I wonder what hit me?” (Star Castle).

Second, you should be able to control the form of your attacks — in short, have a strategy: Qix, Space Invaders, Asteroids, Pac-Man. Counter-examples: Space Firebirds, Scramble, Sneakers.

Third, there should be two goals; the primary goal (getting points) should not overlap 100% with the secondary goal (clearing screens). In Pac-Man, for example, you can go for the monsters (points) or the dots (screen); in Asteroids, the saucers or the rocks; in Invaders, the creatures or the mystery ship.

Whereas in Star Castle, you just go for the cannon; in Galaxian, the aliens; in Qix, area.

Interestingly, the only games with all these features are Pac-Man, Space Invaders, and Asteroids — the three #1 games.

Tomorrow: First, send Star Blaster (fka Space Rocks fka Asteroid Blaster fka Asteroid Belt) to Hayden; second, work on ‘Bounce! I’ve got a good thing going here. The Apple is still the #1 computer, arcade games are the #1 sellers, and I’m writing Apple II arcade games; so I should churn ‘em out and make pots of money while I can. This summer I’ll write three or four. I should establish a working relationship with some other publisher (not Hayden): Sirius? Broderbund?

Papi’s 85th birthday at the Coopers. One day I’ll be as old as Dad and have a teenage son; then as old as Papi and have a 50-year-old son; then I’ll be dead. Went to Adrian’s, got a whole bunch of new games, printed out Bounce on his MX-80.

Feeling a little better, fever is down. Working on Bounce.

Right now I’m making the big conversion from single to dual-page animation. God, what a mess. It was a really bad idea to write it in single and convert at the end. I need a new printout, to go over the code step by step.

Worked a little on Bounce. I want to:

3) Put in good, colorful explosions and sound, like Sabotage. Fuel gauge could be prettier.

Went to Greeley and copied more programs from Mrs. Lee, including Prisoner and Reversal. Prisoner is an adventure based on the TV series, which I’d been looking forward to seeing for quite some time. It has some neat touches, but on the whole, I’m disappointed. Also, it won’t run properly on my computer (it needs Applesoft in ROM).

Reversal is an incredibly strong Othello program; it can cream Ben and me without even taking any time to think. It’s by the Spracklens (Sargon).

Last night went to Adrian’s, gave him some games, got one in return (Gran Prix) and a new printout of Bounce. SHIT! It’s been two weeks since I finished Asteroids — it’s in the envelope, ready to send — I’ll mail it tomorrow.

Dinner at the Green Tree with Dad and Joe Sucher. Ben was impressed that my dad knew Bobby Fischer and that he and Stuart Margulies had written Bobby Fischer Teaches Chess, which Ben had read. Then we went to see Quest for Fire.

[New Haven] I’m back. Classes restart tomorrow. I got a ton of mail. All four magazines (HiFi, Chess Life, Creative Computing, and Softalk), both bills (Bursar and Co-Op), assorted junk mail… and a letter from Doug Carlston at Broderbund re: software submission. I like Broderbund. I’ll send them a letter describing Bounce.

Doug’s letter mentioned that they might even pay airfare for programmers to come work with them. WOW!! Out in sunny California… Oh man, I want to so bad… But first, Bounce. Yes, Deathbounce is a great title. I’ll keep it. Deathbounce.

Ohh, reading Softalk’s got me so psyched up! I’ll finish Deathbounce, Broderbund will publish it (I know, I’m counting chickens, but realistically, nobody would reject a hi-res, machine-language, fastaction videogame), then this summer I’ll write one or two or three more. (Revenge? Plague? Destroy Planet Earth?) And next summer… maybe… go to CA and work for them? Dreams, dreams… Oh, I want it so bad!

Sent off the letter to Doug Carlston at Broderbund this afternoon; worked on Deathbounce. It’s coming along. Since I don’t have too much coursework this week, I should have dual-page working fine by Sunday. By the way, I missed both History and Psych today. Not good.

Next: Ball and missile explosions; ship explosions; fix up scoring, extra ships, graduated difficulty, etc. Then… TEST, TEST, TEST. And the game will be finished. (Well, maybe one or two more small details: display high score in upper right; sound effects; etc.) Ohh… I can’t wait! (What a silly expression! I don’t have to wait, I just have to do it.)

Started programming a new game tonight (an easy one): the numbermatching game from that guy’s wristwatch at Papi’s birthday party at the Coopers’. It’s so irritating: I can’t get it to work right, it’s so simple, I’ve been over it a hundred times and all the parts work, but the whole doesn’t.

Also, last night falling asleep I thought of a really new game idea: The Ten Plagues. Locusts, boils, frogs, hail. You’re Pharaoh, trying to hold them off. In the end, of course, there’s no way to win, as in any Galaxian-type game.

Considering using the ALF for a soundtrack. The music? Handel’s Plagues, of course! (“He spake the word…”) It’d be quite an ambitious project, even more so than Revenge.