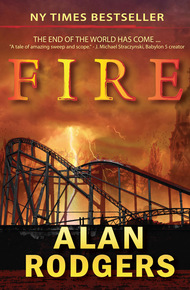 Two countries on the brink of nuclear war. The President is bent on avenging the greatest loss a man can endure: the First Lady. A dangerous religious organization vying to control the fate of the earth. A mysterious virus leading to the resurrection of the dead all over the planet. A bestial nightmare of a creature straight out of Revelation. These are the elements at play in FIRE, an epic novel of the world in what might be its final days.

This fast-paced novel written from the point of view of ordinary people confronting the end of the world is a genuine page-turner. From janitor Ron Hawkins, who's just trying to make it through his college graduation to Luke Munsen, a scientist who wanted to find out dinosaur biology, to an intrepid tabloid reporter, a mad scientist and the President himself, the world has turned upside-down. Our greatest fears are a reality. Even our food is coming back to life … and attacking!

I knew Alan Rodgers early in my career as we were both breaking into the industry. He wrote some epic books, including the New York Times bestseller FIRE. Alan passed away not long ago, but Amy Sterling Casil is bringing his books back into print. FIRE had a tremendous audience in its first incarnation, and I wanted to fan the flames again. – Kevin J. Anderson

Three Days at the End of the World

Transmitted over the AP Wire

WASHINGTON (AP) — In a televised speech this evening, American President Paul Green swore publicly that the death of his wife would not go unavenged.

Russian spokesmen, responding to the speech at the United Nations, expressed grave concerns. "We too mourn the death of Ada Green," said Ivan Illych, third assistant to the Russian Ambassador to the United Nations, "but we cannot countenance threats, veiled or otherwise."

First Lady Ada Green died in a tragic series of accidents two weeks ago, while on a good will mission to Russia. Details of that death are still unclear, but unnamed sources report that she contracted food poisoning after eating a preserved fish in a Moscow restaurant.

According to reports, local doctors administered intravenous penicillin to treat the food poisoning. The First Lady had a severe allergy to penicillin, and the antibiotic sent her into shock, killing her in a matter of minutes.

"I honestly feel for the President," said Thergild. "All of us here in Congress do. He's been through a rough time — rough, hell. That man has been through a horrible and tragic time. But all the same, we can't have him bringing this nation to the brink of war for personal reasons. Can't. No matter how tragic his personal circumstances."

Other members of Congress, who asked not to be identified, were less charitable in their reactions.

"That man is out of his mind," said one New York City Congresswoman. "This is exactly the excuse he's been looking for since he took the oath of office. Do you know anything about that church of his? They're Armageddonists. They're looking for a way to bring on the end of the world. He's looking to create an Apocalypse. And this is the way to the beginning of the end."