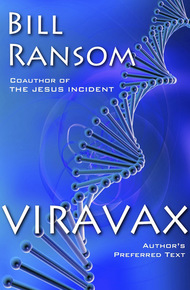 In the private laboratory known as ViraVax, Rico Toledo has uncovered a horrifying truth. In this place, run by a mysterious group called the Children of Eden, the worst suspicions of ex-intelligence officer Toledo have been confirmed: his partner has been genetically programmed for assassination—and Toledo may have been altered too.

Also expanding outward with my connections to Brian Herbert, Bill Ransom is perhaps best known as a collaborator with Frank Herbert on the science fiction classic Pandora Sequence, but Bill also wrote some amazing and gritty solo novels, particularly VIRAVAX, and I was thrilled to have the opportunity to publish him. Now you get a chance to check out the story. – Kevin J. Anderson

Nancy Bartlett staggered away from her husband's body on their living room floor, gun smoke trailing the air behind her like a guardian angel. Her right hand cramped from its grip on the stubby Galil. Nancy used her left hand to pry the right free, then she let her shaking knees drop her to the couch. A winking red light at her Watchdog console signaled that security was on the way.

The mess in front of her on the living room floor did not resemble Red Bartlett any more than the monster he had become had resembled the shy genius, the pride of ViraVax. Red had attacked her, his own wife, with a fury that she had not imagined possible. Her devastated apartment was testimony to that fury.

Nancy set the hot Galil next to a chunk of skull and hair on the couch, then willed her trembling body into the kitchen, where she wouldn't have to look at what was left of her husband.

Their daughter was spending the weekend and her fuel ration coupons at an airstrip out of town, garnering all the flight and simulator time she could get.

Nancy and Sonja lived in the capital of Costa Brava, near the U.S. Embassy compound, where Nancy worked and Sonja attended American School. Red Bartlett lived and worked at the ViraVax facility in the Jaguar Mountains, but visited his family most weekends and holy days at their security apartment in the capital. Today was Ash Wednesday, and a scrap of Red's forehead wore the smudge that told her he had stopped off at the cathedral for the late Mass.

Nancy Bartlett wanted to hold her daughter with a pain she could hardly bear, but she would rather die the most horrible death than have her daughter see her now.

I might still get that chance, she thought. Maybe I should call Rico. . . .

A tone sounded from her Watchdog and she heard the doorlocks snick aside. Security would notify Colonel Toledo soon enough.

Four people stepped inside, all wearing full contamination gear. Two carried the shorty assault Colts made for entry into closed spaces, and they prosecuted a quick search. One lugged several cases of equipment and, when the all-clear was signaled, muscled the bulky cases into the room with the body. No one spoke. The only sound in the room was the whisk-whisk of their bulky suits and the rasp of their respirators.

Nancy had never cared for ViraVax, nor for the Agency's security games that surrounded the labs, but tonight she was thankful for it. She was liaison between the United States and the Confederation of Costa Brava, so the Defense Intelligence Agency investigator would keep ViraVax, the Costa Bravan police and newshounds at bay. She had to tell her story, but at least it would be private. At least, in its ugly way, it would be to family.