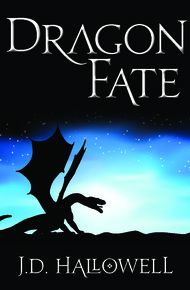 J.D. Hallowell, author of the popular War of the Blades fantasy series, has led an interesting and active life. His varied background includes time as a soldier, automotive mechanic, photographer, cowboy, paralegal, jewelry artist, EMT, psychiatric tech, massage therapist, diamond courier, dog trainer, and entrepreneur. He studied martial arts for over 30 years. Although he is now disabled by the cumulative result of injuries sustained both in and out of the military (he has been shot, stabbed, blown up, bludgeoned, poisoned, and even had harsh language directed at him), he still writes. He has publishedtwo fantasy novels, Dragon Fate and Dragon Blade, and has several other fantasy and science fiction projects underway.His other interests include, but are not limited to, history, archery, paleontology, forensics, cooking, and weaponry of all kinds. He currently lives on the Space Coast of Florida with his wife, his son, and his Great Dane service dog.

War of the Blades Book 1: Dragon Fate by J.D. Hallowell

Dragon Fate, the first novel in J.D. Hallowell's War of the Blades, is a heroic fantasy adventure in the classic tradition of the genre. Delno Okonan is a young former soldier eager to put the swords and strife of war behind him, when a chance encounter leaves him inextricably entwined in a tangled web of dragons, magic, and intrigue, as he struggles to find his place among dragons and men, and stave off a plot by renegade dragon riders that threatens all he now holds dear.

In May 2013, the Examiner.com – an online magazine with a viewership in the tens of millions - labelled J.D. Hallowell's Dragon Fate as one of the Top 5 Indie books 'that you haven't read, but should'. That accolade was true then, and if you haven't read him yet – even truer now.

In his first book in the War of the Blades series, Hallowell manages to introduce engaging characters with description narration that reads like a breath of fresh air. I always like to pick up a new book from time-to-time and what drew me to J.D.'s epic tome of a series (nearly 400 pages per book!) was the traditional fantasy that took hold and took off with a deafening roar. My ears are still ringing. After you launch with his dragons I hope yours do too. – Terah Edun

The old man knelt by the sticks he had arranged for his fire. His hair had once been black; now even the gray had gone, and it was entirely white. He looked to be in his mid-seventies, but in fact, he was far older. He carried no flint, but he didn't need it. He concentrated on the sticks. At first they smoked a little, and then a small flame burst into view. Soon the little fire was crackling merrily, and he placed the petite kettle close enough to heat the water inside.

Suddenly there was a voice in his head that was nearly a scream: "You're surrounded, Love; I don't know how they got so close, but I am coming!"

The old man stood and drew his saber. The blade looked like it was made of some type of ceramic, and gleamed dully in the late afternoon sun. He heard the noise of a bowstring behind him and started to turn to face the threat while trying to get a magical shield up, but he was too late. He felt a searing pain in his low back as a small, wicked, rough-fletched arrow pierced him just above the hip, and he fell to his knees. He could feel the poison on the arrow already beginning to work its way through his body.

At the same instant, four Roracks, or beast-men, charged out from the trees. Their hide ranged in color from black to dark brown, and looked rough, like tree bark. They blended with their surroundings well. Their faces were vaguely man-like but distorted. Their noses were broad, flat, and crooked. Their thin lips were pulled back in fierce snarls showing jagged teeth. Two of them carried swords, but those were old, worn, and rusted almost beyond use. The others simply carried clubs. The one who had shot him stepped into view and made some noises in a strange, guttural language. They all looked to that one and answered with a quick sort of bark without breaking their stride.

As all of that was happening, there was a deafening roar, and a huge dragon landed, crushing two of the beast-men outright. The dragon turned quickly and killed the beast-man closest to the old man and then turned on the one with the small bow still clutched in its hands. The leader of the Roracks tried to fire an arrow at the dragon, but never got the chance; she simply grabbed him by the head and squeezed so hard that the skull breaking was clearly audible. The last of them tried to run, but the dragon jumped and closed the distance before he got three steps.

She turned to the old man and said, "Quickly, Love, there are more of them coming. We must go. Now!"

"You have to get up. We can't stay. There are a score of these foul creatures coming. They will be here very soon, and we won't have the element of surprise this time. Please, Love, come with me!" The dragon was crying and the tears were falling on her Bond-mate's face.

He simply shook his head sadly, "We both knew this would happen eventually, one way or the other. We can't live forever."

"No!" she roared as if she could use the sheer volume of her voice to stop the inevitable. "I won't leave you!"

"You have to. You carry hope. Everything we do is for the next generation. You have to go . . . protect the eggs you are carrying."

His breath was rapid and shallow, and he couldn't last. The dragon wanted to deny that he would actually die, but knew it was happening, and there was nothing she could do. She tried to call enough magic to stop the poison, but it had spread so fast that it was no use.

He closed his eyes for the last time. She knew he was gone and that she could do nothing for him. Just as more beast-men broke into the clearing, she launched herself skyward and roared so loud that the creatures in the lead fell on the ground holding their ears. She flew high, and then, unable to think past her grief, she headed north over the mountains with no clear destination in mind, instinctively heading for more familiar territory.