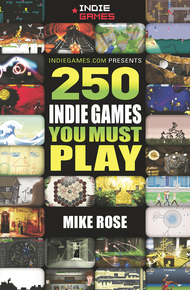 250 Indie Games You Must Play by Mike Rose

With a surge in popularity recently and an increase in great downloadable games, there has never been a better time to learn about independent "indie" games. 250 Indie Games You Must Play is a guide to the exciting and expanding world of indie gaming. Whether you are a veteran of the indie game scene or have never played an indie game before, this book helps you experience the best in indie gaming and further your understanding of why indie games are so important in the entertainment industry.

The wide range of games highlighted in the text encompasses concepts and ideas that will change your perspective of what video games can be. The book covers puzzlers, platformers, beat ‘em ups, shoot ‘em ups, role-playing, and strategy.

Apart from being fun, indie games can be experimental, emotional, nostalgic, and occasionally just plain bizarre. Some make you sit back in awe, while others have you thinking, "Why have I never played a game like this before?" Better still, the majority of these games are completely free to play and even the commercial releases are incredibly cheap. Once you start playing indie games, you may not be able to look at your big-budget blockbusters the same way ever again.

RunMan: Race Around the World

In the words of developer Tom Sennett, RunMan: Race Around the World is “a game about doing your best and running really, really fast.” Our hero RunMan shows up for a race, only to find that the other contestants have dropped out because they fear his speed. Rather than accept the trophy, RunMan decides to challenge himself to a race around the world.

RunMan has two main actions—run, and run really fast. As he pounds along platforms knocking bad guys out of the way and popping balloons, he au¬tomatically springs off any wall he runs into, allowing for a very smooth gaming experience that many players have compared to the early Sonic the Hedgehog games. This game has a lot of style too, from RunMan shouting ”Rock on!” as he runs to the 1920s blues, country, and jazz music sound¬track.

The game was drawn entirely in Microsoft Paint over the course of four years, and features over 30 levels to rush through.

The Japanese term “karoshi” refers to situations where people literally work themselves to death—hence, Jesse Venbrux’s tough puzzle platformer chal¬lenges you to kill the protagonist in a variety of ways on each level, from landing on sharp spikes to getting crushed by falling crates.

What appears to be a relatively simple game quickly shows its true colours, as the rules of play change often. While your goal is always to kill yourself, you will need to experiment with different ways of doing so by pressing but¬tons and shooting weapons. After completing 25 levels, there’s even a boss battle that you must lose multiple times.

Karoshi proved so popular that Jesse decided to make an entire series of games dedicated to the concept, including Karoshi Factory (a co-op edition) and Super Karoshi (in which you help other characters kill themselves). The browser version of the game, Karoshi Suicide Salaryman, has been played over three million times.

Citizen Abel: Gravity Bone (the full name) puts you in the role of a secret agent as you attempt to complete a couple of undercover missions from a first-person perspective. Nuevo Aires, Gravity Bone’s world, is incredibly striking and stylish, with cube-headed characters and unusual level design. The gameplay is simple yet clever.

Missions are provided by your organisation via cards, and range from dress¬ing as a waiter to serve your target a special drink to taking photos of birds and jumping across flagpoles. While the game is rather short, progression is very enjoyable and there’s a great twist at the end. At the time of release, many gamers commented that it felt as though Gravity Bone ended a little abruptly, and there is still hope that Brendon will release a sequel one day.

The game runs on the Quake 2 engine—although Quake 2 is not required to run it—and features music from the 1985 Terry Gilliam film Brazil.

Pathways explores the idea of interactive storytelling through abstract de¬cisions and literal pathways. The hero walks through the same town each day, taking different routes and encountering separate stories that, when all brought together, make up his life story.

With each new beginning, the protagonist’s wife tells him that she worries whenever he goes out on one of his walks. You’re then given a choice of multiple paths to walk down, and after you’ve reached the end of the day, you’re thrown back to the title screen where your tally is increased. Once all eight endings have been found, the game draws to a close. Whether you take each story literally or as a metaphor for one of life’s many twists and turns, there’s no denying that Pathways emanates an incredibly heartfelt atmosphere.