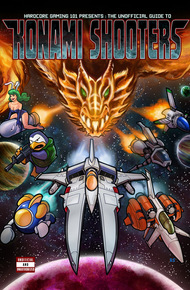 "Hardcore Gaming 101 always brings the goods when it comes to loving, fact-filled looks into the history of games - and the lineage of Konami shmups is one that deserves a good, hard look. This book doesn't disappoint, with everything from Gradius through Time Pilot and beyond getting exhaustive profiles." – Simon Carless

From a gamer's perspective, the Konami of the '80s and '90s felt like one big happy family. Despite having a huge variety of teams working on completely different games, they often referenced other titles, eventually building up a whole series of in-jokes, and the feeling that all of their games took place in the same insane universe.

Nowhere was this clearer than in Konami's shooter games. Gradius, their first real break out hit, developed a number of tropes so iconic that a whole other parody series, appropriately dubbed Parodius, was created to pay humorous tribute to it. It also weaved in one of Konami's other series, TwinBee, the game that defined the "cute-em-up" term and became its own unique cross media sensation.

Unfortunately, for all of the references and in-jokes, Konami didnÅft support their shooter series very well outside of Japan. The Gradius franchise only saw sporadic releases in North America, with many titles going unreleased and only appearing years later as a part of compilations. For a long time, the only TwinBee game released was the second one, under the title Stinger, before the series was abandoned. The Parodius games were not released at all, and many arcade-only titles were never ported, leaving many gamers worldwide to only discover them years later through MAME. Oddly enough, the most recent Konami shooter, Otomedius Excellent for the Xbox 360, was released worldwide in 2011, but most of its fan service relied on knowledge of games that had never been released outside of Japan.

This book aims to fill in the gaps of all of the places where Konami's shooters fell through the cracks, to explore their recurring themes, and more importantly, to analyze some of the most exemplary entries of the shoot-em-up genre. Even though many of the titles contained within this book may be unknown to you, I hope that if you've ever played a Gradius or a Life Force game, you'll be inspired to try out some of these other releases.