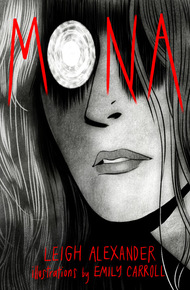 Brandon Varnish had a felt coat with a high collar, and Mona pretended she smoked cigarettes so that she could keep stretching out twin fingers for drags that were faintly wet from his lips. She believed other girls passing by on the sidewalk outside the bar were looking at them in envy, wondering what Brandon Varnish was doing with her. The entire world seemed to arc toward and around Mona like a dome, light and sound humming at a distance.

"So I gotta say," he said, angling toward her. She thought, here it comes. "I've never really actually been a 'video games guy'—"

"Well, the one I'd really like to show you would probably be Silent Hill 2," she said, grasping for his cigarette again. "It's, like… so, okay, it's a horror game, a third-person horror game, and this guy gets a letter from his wife asking him to meet her someplace. Except she's dead, she's been dead for a while, and he, like, enters this world, like a purgatory…"

Mona heard her voice a little too loud and thin, inarticulate.

She decided it was time to 'bite the bullet', to put herself out there. To go for it, she thought, admirably.

"It's hard to explain. I guess it's one of those things I'd have to just show you," she said, carefully, "and then if you like it maybe you can commission me to write about it on your site. I have a copy at my place, if you want to… like, I guess it's only 9:30."

There was a terrifying pause, during which he squinted around his cigarette and made a movement so faint Mona felt proud to catch it, felt a shift of the air in her favor: a performative half-motion with his forearm, like he'd look at a watch he wasn't wearing.