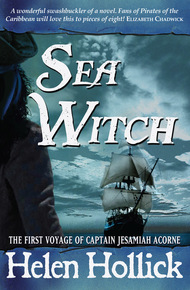 Helen Hollick lives with her family on a thirteen-acre farm in Devon, England. Born in North-East London, she wrote pony stories as a teenager, moved to science fiction and fantasy, and then discovered historical fiction. Published traditionally for over twenty years with her Pendragon's Banner Arthurian Trilogy, and her 1066-era historical novels of Forever Queen (US title) / Hollow Crown (UK title) and I Am The Chosen King (US title) / Harold The King (UK title), she became a USA Today bestseller with Forever Queen, now published in several languages.

She also writes the Sea Witch Voyages, pirate-based nautical adventures with a touch of fantasy. The series is currently being translated into Italian.

Helen's present project is completing the Fifth Sea Witch Voyage (On The Account) and has been commissioned to write a non-fiction pirate book which will explore pirates in fiction, fact and fantasy.

Helen went Indie in the UK about seven years ago, and enjoys being in control of her books. 'It's good to be your own boss," she says. As an active supporter of Indie Authors she is Managing Editor for the Historical Novel Society Indie Reviews.

The Place : The Pirate Round - from the South African Coast to the sun drenched Islands of the Caribbean.

Escaping the bullying of his elder half-brother, from the age of fifteen Jesamiah Acorne has been a pirate with only two loves - his ship and his freedom. But his life is to change when he and his crewmates unsuccessfully attack a merchant ship off the coast of South Africa.

He is to meet Tiola Oldstagh an insignificant girl, or so he assumes - until she rescues him from a vicious attack, and almost certain death, by pirate hunters. And then he discovers what she really is; a healer, a midwife - and a white witch. Her name, an anagram of "all that is good." Tiola and Jesamiah become lovers, but the wealthy Stefan van Overstratten, a Cape Town Dutchman, also wants Tiola as his wife and Jesamiah's jealous brother, Phillipe Mereno, is determined to seek revenge for resentments of the past, a stolen ship and the insult of being cuckolded in his own home.

When the call of the sea and an opportunity to commandeer a beautiful ship - the Sea Witch - is put in Jesamiah's path he must make a choice between his life as a pirate or his love for Tiola. He wants both, but Mereno and van Overstratten want him dead.

In trouble, imprisoned in the darkness and stench that is the lowest part of his brother's ship, can Tiola with her gift of Craft, and the aid of his loyal crew, save him?

Using all her skills Tiola must conjure up a wind to rescue her lover, but first she must brave the darkness of the ocean depths and confront the supernatural being, Tethys, the Spirit of the Sea, an elemental who will stop at nothing to claim Jesamiah Acorne's soul and bones as a trophy.

Helen Hollick is a writer whose books have adorned my shelves for years. Known for her Arthurian trilogy Pendragon's Banner, she has since proved that she has a real flair for adventure and romance on the high seas as well. Jesamiah Acorne's adventures will delight those who loved Pirates of the Caribbean - and if you enjoy a little magic and witchery as well, all the better! – Charlotte E. English

Shipwrecked on the Florida coast, Jesamiah Acorne spent a disturbed night, then heard some interesting news…

Had anyone been awake to witness Jesamiah's self-indulgent misery during the night they would not have believed the man urgently shaking his friend's shoulder to be the same person.

Rue was stretched out beneath the shade of a palm, legs crossed at the ankles, the wide-brimmed grass hat he had fashioned pulled low over his eyes, arms folded across his chest. He shoved the hat from his eyes, stared at Jesamiah squatting beside him, closed his eyes again and resettled his hat.

"Go away." He added something crude and explicit in French.

"Listen! I have news! Bloody superb, gift from God news!" Jesamiah's excitement was unmistakable. Like a boy on his birthday.

"It 'ad better be," the older man growled, removing the hat and waving it ineffectually at the irritating buzz of insects. "I do not take kindly to being woken from my afternoon nap."

"Three more survivors have straggled ashore, down in the next village."

"Très bonfor them! As long as they find their own comfortable shade I am most 'appy for them." Annoyed, Rue replaced his hat.

Jesamiah snatched it, tossed it away.

"Will you damned listen? They are Spanish."

The Frenchman was unimpressed. "Unless they are natives, so is everyone along this stretch of coast. Even you are 'alf Spanish, your mother was Spanish you are able to speak the language. In case you 'ad not noticed, we 'appen to be idling in Spanish territory."

"They were from a Spanish vessel. One of a fleet." Jesamiah ignored the sarcasm, had his hands on Rue's shoulders attempting to shake sense into him. "A convoy of galleons. Galleons, Rue. The entire fleet went down. Carrying gold from Mexico; packed to the fore-deck, bloody great, treasure carrying galleons!"

Interest was twitching. Rue uncrossed his legs. "You are serious?"

The grin swept over Jesamiah's mobile face. "As serious as a duck's arse, mate! Word is spreading as wild as fire in the hold; they were on their way to Spain from Havana, were hit by the same hurricane that did for us. All of them Rue, all laden with gold bullion and silver, precious gems and barrels of indigo. The wrecks are scattered along God-knows how many miles of reef." Hunkered on his heels he rested his forearms on his thighs, giving a moment of quiet silence for the implication to sink in.

The wind scurrying in from the Atlantic was strong on the far side of the dunes, among the scrub and vegetation its bluster dropped considerably. Here, it was more of a whispering breeze, its voice a very quiet, continuous,sssss, a muted harmony whispering with the muffled whisshof the ocean.

"A fortune's in the holds of those ships, Rue. A fortune run aground an' sitting there with only fish and crabs to shit on it."

Slowly the Frenchman smiled, a sweep that split his face from ear to ear. "Or for someone with enterprise and skill to salvage it,non?"

Scratching at his beard-growth Jesamiah pondered the genesis of a plan. "No Rue, for someone with a fast ship and the savvy to go one better. I'd wager the Spanish are already running around like their arses are on fire. The stuff was destined for the King's treasury, wealth he cannot afford to lose. They'll be all over the Florida reefs these next few months, reclaiming what they can. Plenty of sharks too – and I am not talking of fish. Pirates 'ave as much a nose for the smell of gold as do our finned friends for blood."

Rue sat forward, his eyes gleaming, hooked. "So what is it you propose?"

Rising to his feet, Jesamiah strode a few paces to the top of the dunes, thinking. Unprotected, the wind hit him in the face and the sound of the surf churning on to the beach and roaring in his ears was startling. He stood there, legs widespread, hands on hips staring into the emptiness of the wild Atlantic. The air smelt heavy with salt, was humid, with an undertone of damp earth. He drank it all in, breathing it deep into his lungs the sight, sound and feel of the sea.

Turning his back to the ocean Jesamiah spoke his thoughts aloud, the wind streaming through his hair and blue ribbons laced there. "They will have to store what they salvage somewhere. Build a warehouse along the coast? Somewhere easily accessible from the sea but with fresh water, and practical to defend. Probably near to where the main body of the fleet went down."

Remembering the torn carcass of the Salvation added, "I'm not going to risk the hazard of shallows, reefs and the more deadly type of shark for nothing more than a few pieces of eight. Not when all we have to do is let the Spanish do the collecting while we bide our time, learn where this storehouse is, then sail in and take what we want." There was no trace of the despondency of last night in his eyes. Nothing but an eager alertness.

"Mon ami,Capitaine,it is an excellent plan but are you not forgettingun petitmatter?" Rue lifted his hand, held finger and thumb close together indicating something very small. "We are not in possession of a ship."

Jesamiah stood there, his bare feet sinking into the white sand. Stood there grinning. He spread his arms, palms uppermost. "So we get one."

"D'où– from where?" Rue climbed the dune joined him on the top. With an extravagant sweep of his hand, he gestured towards the worm-riddled jetty that served the village. Pointed at the two leaking fishing boats and their own battered longboat. "Are we to use one of those? What do we do? Beat a merchant crew to pulp with the oars?"

"Our longboat will take us to St. Augustine. From there we find a passage to Virginia, we can talk ourselves aboard or something. Wouldn't be the first time I've had to do so."

"Virginia?" Rue spluttered, raising his arms in the air, exasperated. "The sun 'as got at you? Why, in the name of God, do we wish to go to Virginia?"

Rue brushed sand from his bare legs. "I 'ave a feeling I do not wish to be knowing this but tell me anyway. Why do we need to go all the way to Virginia to get us a ship?"

Folding his arms Jesamiah smirked. "There are eight of us. Eight men to find and take a suitable vessel. We need to get something easily, something sleek and fast, and preferably something that has a cargo we can sell immediately to entice a full crew. We might strike lucky and find what we want in St Augustine, but we would have to get out past the fort. With that battery? We do not have the men or time to sit on our rumps and wait for something to come to us, therefore, we go to where I know there will be what we want."