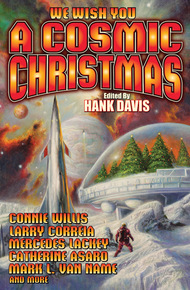 Hank Davis is a senior editor at Baen and the author of numerous short stories that have appeared in Analog, Dangerous Visions, and more.

Joy to the world . . . or, joy to the worlds! Let heaven and nature—and also the supernatural—sing. A Cosmic Christmas presents twelve stories of Christmas in very unusual circumstances, ranging from vampires to robots, from the hills of Appalachia to a high orbit space station, all celebrating the holiday in their own, offbeat ways.

How do robots celebrate Christmas? What about vampires? Can Santa make it up to a space station or does vacuum not go very well with magic reindeer? Twelve very unusual Christmas tales from a star-spangled list of contributor including Larry Correia, Mark L. Van Name, Catherine Asaro, and Mercedes Lackey.

Toni Weisskopf, the publisher of Baen Books, isn't just a traditional publisher—she's innovated many new ways of distribution with the numerous changes in the business. Sometimes Baen Books fits the mold of a big publisher, but they also embrace cool ideas and explore techniques that indie publishers use, too. I'm delighted that Toni is letting us experiment with two Baen publications for this StoryBundle—and her two Cosmic Christmas SF holiday anthologies couldn't be more perfect. – Kevin J. Anderson

The hovercar hummed on its cushion of air as I drove through the Rocky Mountains, following a narrow road between the snow-covered fir trees. I came around a curve—and saw the house.

It stood on a plateau across the valley. I was just entering Mountains sheered up behind it, on its north side, the peaks scantily dressed in scraps of cloud. On the east and west sides, cliffs dropped down until they disappeared into the lower peaks. The house was three stories high, with arched windows on its upper levels. At first I thought the peaked roof was blue, but as I drew nearer I realized it was covered with panels of glass that reflected the sky and the drifting clouds.

I smiled. Soon I would see Sadji again. Come to the mountains, he had said. Come spend Christmas with me. It would be my first visit to his private retreat. I wasn't performing in the New York Ballet Theater's production of the Nutcracker this year, so they let me have the holiday.

Sadji Parker had been a multimedia magnate when I was in kindergarten. When we first met last year, I had been so intimidated I could hardly talk to him. But I soon relaxed. He was like me. He also had grown up on a farm, also loved walks in the country and quiet nights in front of a fire. He too had found unexpected success in an unexpected talent. For him it was holography: he built his fascination with lasers and computers into a financial empire, earning with it an unwanted fame that he sought refuge from in the privacy of his holidays.

There was only one difficult part. Sadji had invited his son to spend Christmas with us, and I had a feeling if the son didn't approve of me I would lose the father.

As I pulled into a courtyard in front of the house, the wall of a small building on my right rolled up into its roof. I looked inside and saw an unfamiliar hovercar parked there, a black Ferrari that made my rental car look like a junk heap.

I drove into the garage and pulled in next to the Ferrari. When I turned off the ignition, my car settled into the parking pad so gently I hardly felt it touch down. Then I slung my ballet bag over my shoulder, got out, and headed for the house.

It would be good to see Sadji. I had missed him these past weeks. He had been traveling, something to do with his business rival Victor Marck, the man who owned the Marcksman Corporation. Sadji's preoccupation with the war he and Marck were fighting had spilled past the usually inviolate barrier between his private and professional lives. Before he left on his trip he had told me how much he needed the respite of our holiday together.

I stopped in front of the house, faced by two imposing doors made from mahogany. The mirrors of a solar collector were set discreetly into the wall above the door frame, their surfaces tilted to catch the sun. When I rang the doorbell, chimes inside played a Mozart sonata.

No one answered. After a while I knocked. Still no answer. I looked around, but there was no other entrance. Nor was there any way around the house. A rough stone wall bordered both the east and west sides of the courtyard, and on the other side of each wall, cliffs dropped down in sheer faces. Beyond that, the spectacular panorama of the Rocky Mountains spread out for miles.

"Hello?" My breath came out in white puffs. I rang the bell again, then pulled on the door handles.

They swung open. "Please come in."

I blinked at them. Then I walked into a wonderland.

Tiles covered the walls, the floor, even the ceiling of the entrance foyer. Shimmering globes hung in the air in front of each square. The spheres weren't solid. When I stretched out my hand, it passed right through them. If I moved my head from side to side, they shifted relative to each other as if they were solid. When I moved my head up and down, their relative positions stayed fixed but they changed color. Rainbows also filled the foyer, probably made from sunlight caught by the solar collector and refracted through prisms. It was like being in a sea of sparkling light.

I smiled. "Sadji? Are you here? This is beautiful."

No one answered. Across the foyer, a doorway showed like a magical portal. I walked through it, coming out into an empty room shaped like a ten-pointed star. The doorway made one side of a point on the star, with the hinges of the door in the tip of the point. The three points on the east side of the room were windows, six floor-to-ceiling panes of glass. Pine tiles covered the other walls, each a palm-sized square of wood enameled with delicate birds and flowers in colors of the sunrise. Light from the foyer spilled out here, giving the air a sparkling quality. It made faint rainbows on the wood and the white carpet.

But there was no Sadji. I felt strange, alone in his oddly beautiful house. I went to the windows and stood in a point of the star. Outside, the wall of the house fell away from my feet, dropping down into clouds. All that stood between me and the sky was a pane of glass.

Something about the window bothered me. Looking closer, I realized a faint glimmer of rainbows showed around its edges. Was it spillover from the foyer? Or was that breathtaking view only a holo? It wouldn't surprise me if this place had the best holographic equipment the twenty-first century had to offer. If anyone had the resources to create a mountain-sized holo it was my absent host, Sadji Parker. Why he would do it, I had no idea.

Then I had an unwelcome thought: what if the view was real but not the glass? Although there were no sounds to make me think I stood in front of an open window, there wasn't really anything to hear out in that chasm of sky. And I had been in stores with exits protected by moving screens of air that kept heat in and wind out better than a door. The newer ones were so sophisticated you couldn't detect them even if you were right next to them.

But if this was a holo, where was the hologram? My only knowledge of holography came from a class I had taken in school. This much I remembered, though, to make a holo you needed a hologram, a recording of how light bouncing off an object interfered with laser light.

I shook my head and my reflection in the glass did the same, showing me a slender woman with yellow hair spilling over her wool coat down to her hips.

Then I smiled. Of course. This couldn't be a holo. There was no way my reflection could show up in it unless I had been there when the hologram was made.

I reached out and pressed glass on both sides. It wasn't until my shoulders relaxed that I realized how much I had tensed.

There's no reason to get rattled, I thought. Then I went to look for Sadji.

Footsteps. I was sure of it.

I peered through the glittering shadows. Coming in here had been a mistake. I couldn't see anything. It was dark except for sparkles from a chandelier on the ceiling. The chandelier itself wasn't lit, but its crystals spun around and around, throwing out sparks of light. There had to be laser beams hitting them, but the scintillating lights made it impossible to see anything clearly.

"Sadji?" So far I had found no trace of my host in the entire house. But I had made other, much less welcome discoveries. The front doors had locked themselves. There was no way out of the mansion, no food, no usable holophones, not even a working faucet.

A man's accusing voice came through the glittering darkness. "You're Bridget Fjelstad, aren't you? The ballet dancer."

He walked out of the shadows, a tall man with dark hair and big eyes who was a few years my junior. I recognized him immediately. Sadji kept his picture on the mantel in the New York penthouse.

"Allen?" I exhaled. "Thank goodness. I thought I was trapped in here."

"You are," Sadji's son said. "I've searched the house twice since I got here this morning. There's no way out. Nothing even works except these damn crazy lights."

"Don't you?" The shifting light made his face hard to read, but there was no mistaking the hostility in his voice. "You are his girlfriend, aren't you?"

The last hour had made me wonder. I couldn't figure out what was going on. "I don't know." I regarded him. "Did you turn on these lights?"

"Don't flatter yourself." Although he spoke curtly, he almost sounded hurt rather than angry. "I have better things to do than make light shows for my father's money-grubbing mistress."

I stared at him. If anything, Sadji's intimidating wealth had almost scared me off. I stepped back, as if distance could soften Allen's words, and bumped into a horizontal bar at waist level. It felt like a ballet bar, what we held on to during exercises.

It was a mirror. Of course. When I looked closer, I could make out my reflection. I knelt and laid my palms on the floor. It felt like wood too.

"What are you doing?" Allen asked.

He stared at me. "So Dad built his new love a new dance studio in his new house." He swallowed. "Nothing like throwing away the old and replacing it with the new."

I would have had to be a cement block not to hear the pain in his voice. I doubted it was easy being Sadji's son, the child of a woman who had divorced Sadji over ten years ago.

I spoke gently. "Allen, let's try again, okay? I don't want to be your enemy."

He regarded me. "And I don't want to be your son." Then he turned and walked away into the glittering shadows.

I was afraid to call him back, sure that my clumsiness with words would only make it worse.