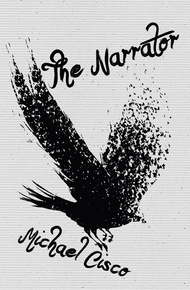 "Michael Cisco (born October 13, 1970) is an American writer, teacher, and translator currently living in New York City. He is best known for his first novel, The Divinity Student, winner of the International Horror Guild Award for Best First Novel of 1999. His novel, The Great Lover, was nominated for the 2011 Shirley Jackson Award for Best Novel of the Year, and declared the Best Weird Novel of 2011 by the Weird Fiction Review. He has described his work as "de-genred" fiction."

The Narrator by Michael Cisco

By turns phantasmagorical and exhilarating (reminiscent one moment of Robbe-Grillet, the next of Artaud, with a tinge of Thomas Ligotti, the imaginative virtuosity of Gene Wolfe or M. John Harrison), The Narrator is like a stark sequence of strong iron bars, brimming with dark ambiance. Combining unmatched craft with masterful storytelling, this is literate fantasy unlike any other, intricate as the most elaborate dream, in which the narrator himself is the most ambiguous thing of all.

Michael Cisco has long been one of our favorite underrated writers. I was first introduced to his work when he sent me his novel at the encouragement of Thomas Ligotti. At first I wasn't sure what excited me the most; the fact that Ligotti knew about my (small but fierce) publishing company or that I had a fascinating new writer to publish. The Divinity Student was published in 1999 to much critical and commercial success, winning awards and garnering fans. And Michael has continued to impress me ever since. In this fantastic novel, Michael combines some of the most imaginative supernatural scenes with a moving commentary on war. I've never read anything like it. Enjoy! – Ann VanderMeer

An army is a horror. It's a horrible thing. They say you might change your mind about that when the country is invaded and your people are suffering wrong, but for me this is all just more horror, more army-horror.

It's through rags of fast-moving smoke that I first catch sight of Tref. I'm standing in the pass, to one side of the pumice road, looking down from my perch on the massed roots of some dusty old cork oaks. The city below me is like a shining, smoking lake, thrusting its troubled glints into my eyes and making them smart. Overhead, the sun is lost in a white sky without circumference, above the flashing waters of the city.

One flash of the sun and I am down in its streets. Why is the station so far out of the city limits anyway? Most likely a collusion between the builders of stations and the builders of long roads. I walk into Tref unremarked as a ghost, and now this is me, here, in its bare broad avenues. The sky showers the street in volleys of sharp light. I take step after step, feeling the street and the city existing all around me, like figuring out all the parts of an unfamiliar flavor. My mind is too tired and weak from travel to do much of it. The city washes by me and its outlines dance and glitter as they will, playing their fairy games with me. I stumble along in a boulevard so wide the opposite side seems to sit on the horizon and the whole world bulging in between me and there. Out from my pocket I pull again to look at the implacable pink lot that tells me that I am drafted ...

I put in for an exemption

I look up just as the sun quits the sky. I am sprawling in a white wrought-iron chair in the paved court of cafes, the iron finery is biting into my back a little, the table is streaked with sunset bands on the glass top. Heavy and tippy at once. Bands of gold and rust light cut across my coffee ring. The ticket is still there in my right hand on my right thigh. A little wind toys with it there, the battered paper is soft and tough as a piece of linen. Why can't I awake from this dream? This is an ugly dream. These words seem to come from an old song. I came from the village ... the village named for the sheep fold that was the first thing probably built there, where the high way broadens on the mountain of the heavens/constellations of the spring. When I was in my third year at the College of Narrators, Twisse, who was our ward resident, passed word of the draft around and told us to get in our exemption forms early. Next thing I know I pull a pink lot from an envelope in the mail room and stand staring at it, welded to the spot.

"How did that happen?" Twisse asked, peering over my shoulder. He took the paper gingerly in his hands. "No," his head shaking, "you should go to see the Uz about this."

Twisse walked away with his sharp, upturned nose in the air. My friend Spiena was with me and rested a hand on my shoulder.

I looked at him.

"Stay with Blue Loom Pigsty, or—your other uncle, whatever his name was."

"If you can keep out of sight for a few months, you'll probably be forgotten."

"You might," he says sadly. "But you take the same chance in the war."

"What about my degree?"

"You can forget your degree. Everyone here would certainly sympathize with you."

"I should try at least to clear this up with the Uz," I say. My mind is like a motionless reflection in a piece of glass. My thoughts are frozen in place, too frightened to move.

"Oh he won't do anything!" Spiena said with a look of disgust. "You might as well tell your troubles to these chairs."

"I have my copies of the documents. I have my dated registration. I kept everything just in case."

"Eh. I suppose he might listen, but, that's only because anything is possible with these administrators. He's white."

"I honestly don't believe they really think at all."

"Back into the mountains ...?" Spiena said unhelpfully.

Winter comes so swiftly in the mountains that the leaves are frozen green on the trees, the grass in the meadows. The foliage never turns color or falls, but hibernates in clear ice casings until the spring thaw restores their interrupted life again. So the winter landscape is tinkling green, dazzling with flakes of light, crisp through the snow. The many rock-lipped streams freeze clear as well, and the fish are suspended in place like spangles of precious metal until spring. I walked to the small cluster of administrative buildings, a clutch of cottages and shops connected by a tangle of gravel paths and baffled from sight like an embarrassment by several echelons of yew hedges. I passed through these under boughs of cherry trees, the scarlet cherries still on the branches, glowing like embers through the ice that outlined every leaf and twig in shining white thread, and I saw myself endlessly multiplied in all that pure ice, even on the yew branches, their deep green almost black, and webs of gossamer ice in the recesses of the hedges. A dark, bulbous, top-heavy figure loomed in and out of them as I passed, arms anxiously swinging.

I never have been able to find out how the administrators get their posts, or why they all seem so unqualified and unhelpful. I walked in among the dozen or so buildings with smoke in my face, blown down toward the ground from the chimneys of the cottages to my left. One of the administrators, a white old woman in a shawl, was spinning in a doorway, muttering around a short clay pipe to a sharply-dressed aide who avidly took down her dictation. The woman eyed me as I passed, without slowing her spinning or her smoky speaking. I glanced at her, then at once dropped my eyes to the thick ankles slotted into shoes so tight they seemed painted on. While her look was cryptic, her aide, who was red, shot me a glance of unmistakable disapproval. I was tempted to fling a handful of snow at them, but after all I might need to persuade them of my good will later, so I belatedly turned, as I had already passed nearly altogether out of sight of them, and made a sort of half wave half salute, along with what I felt was a strained and unappealing smile. Some smiles break a face and some smiles tear across.