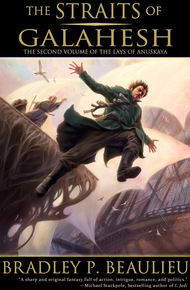 Bradley P. Beaulieu is the author of the critically acclaimed epic fantasy series, The Lays of Anuskaya. Along with fellow author Gregory A. Wilson, Brad runs the highly successful science fiction and fantasy podcast, Speculate, which can be found at www.speculatesf.com. Brad continues to work on his next projects, including a Norse-inspired middle grade series and The Song of the Shattered Sands, an Arabian Nights-inspired epic fantasy that will be published by DAW Books in the US and Gollancz in the UK. For more about Brad and his writing, please visit www.quillings.com.

The Lays of Anuskaya Book 2: The Straits of Galahesh by Bradley P. Beaulieu

West of the Grand Duchy of Anuskaya lies the Empire of Yrstanla, the Motherland. The Empire has lived at peace with Anuskaya for generations, but with political turmoil brewing and the wasting disease still rampant, opportunists from the mainland have begun to set their sights on the Grand Duchy, seeking to expand their empire.

Five years have passed since Prince Nikandr, heir to the scepter of Khalakovo, was tasked with finding Nasim, the child prodigy behind a deadly summoning that led to a grand clash between the armies of man and elder elemental spirits. Today, that boy has grown into a young man driven to understand his past – and the darkness from which Nikandr awakened him. Nikandr's lover, Atiana, has become a Matra, casting her spirit forth to explore, influence, and protect the Grand Duchy. But when the Al-Aqim, long thought lost to the past, return to the islands and threaten to bring about indaraqiram – a change that means certain destruction for both the Landed and the Landless – bitter enemies must become allies and stand against their horrific plans.

Can the Grand Duchy be saved? The answer lies hidden within the Straits of Galahesh…

Brad’s a Writers of the Future winner, like me, who has gone on to create what will be some of the most enduring fantasy novels of our generation. He’s that good. Trust me. – Steven Savile

Nikandr, his heartbeat quickening, waved Gravlos over to the helm and raised his hand in the signal for the crews to begin loading grapeshot. They complied, finishing in respectable time, as Nikandr sent another sign to the ship's acting master, calling for muskets.

The Gorovna was not complete and had been readied with only five muskets. They were removed from their locker by the master and four of them were passed out to the crewmen known to be good with the weapon. The fifth was handed to Nikandr.

He immediately pulled one of the walrus tusk cartridges filled with gunpowder from the bandolier across his chest and began loading the weapon. He finished well before the others and began scanning the ground below. It took him a moment to find it among the mottled patches of stone and snow—a skiff, nestled in a copse of scrub pine. Once he had found the ship, he found the men. Twenty paces away four of them kneeled at the edge of a tall cliff that ended hundreds of feet below in a forest of spruce. They appeared to be inspecting the ground, though for what reason Nikandr couldn't guess.

It was possible they were Aramahn like Jahalan and Udra, but their almond-shaped turbans and long beards and threadbare clothing made him think otherwise. Plus, the Aramahn knew that to come so close to the palotza without permission was to risk trial and possibly death. They had to be Maharraht, members of a group that had decades ago broken with the peace-loving ways of the Aramahn, dedicating their lives to driving the Grand Duchy from the islands and drowning them in the sea.

Nikandr sucked in breath as one of them leapt from the cliff. The man's descent quickened. He spread his arms wide, as if preparing for the cool embrace of the sea, not the singular end that would be granted by the earth and stone that lay below him.

Improbably, his descent slowed. His long robes were whipped harder than the speed of his fall could account for, and soon it was clear that the wind was carrying him like a gull on the upward drafts that blow along the cliffs. Like a feather on the breeze he was carried, arms held wide as many of the wind masters do. He soon regained the level where his comrades still stood, at which point he alighted to solid land as if stepping down from the mountain on high.

Nikandr coughed and pitched forward, supporting himself with one hand on the deck. A well had opened up inside him, a hole impossibly deep, impossibly black. It had coincided so closely with the man's leap that he couldn't help but think they were linked in some way, though how this could be he couldn't guess.

On the cliff below, the one who had leapt turned and pointed up toward the Gorovna.

"Come about," Nikandr called, "and bring her down by half!"

As one, the Maharraht bolted for the skiff.

"Jahalan, they have at least one havaqiram with them, probably two."

"I feel him," he replied, "but it is not just a havaqiram, son of Iaros. They have summoned a hezhan."

"I agree that it should not be, but they have done it."

Nikandr doubted him, but now was not the time for questioning; they needed to neutralize this threat before it could be brought to bear on the Gorovna—or worse, Radiskoye.

The skiff was airborne in less than a minute—the same time it took for the Gorovna to come about and close within striking distance.

The crack of four muskets rang out, followed a heartbeat later by the thunder of cannons. Bits of wood flew free from the stern of the skiff, and one of the Maharraht jerked sharply to his right, his shoulder and ribs a mass of red. One of the others helped him to the floor and immediately began binding his wounds while the other two steered the craft northward.

The clatter of four men reloading their muskets filled the air as Nikandr sighted carefully down the barrel of his musket. His mouth was watering, his throat swallowing reflexively. He took as deep a breath as he could manage and released it, slowly squeezing the trigger as the urge to curl into a ball grew markedly worse.

The pan flashed. The gun kicked into his shoulder.

The shot went wide. He'd been aiming for the man holding the sails, but it had struck the Maharraht tending to his wounded comrade. The man held his shoulder and stared up at the ship. Nikandr was close enough now that he could see the look of venom on the man's face.

The wind continued to blow. The sails began to luff, and the ship twisted with the force of the wind. Jahalan was trying to adjust when a gale blew across the landward bow. It was so fierce that the ship's nose was pushed upward and windward.

Nikandr blinked at nearby movement.

A heavy thud sounded next to him.

When he turned, he found a crewman lying on the deck, moaning and a river of red flowing out from underneath his head. The severe angle of the deck caused him to slide. Nikandr reached for him, but he was too far. He accelerated until Borund, holding tightly to a cleat, locked his meaty arm around the man's waist.

Then the wind reversed.

The ship tilted sharply forward. There were only sixteen sails in use, but they were full and round and near to bursting.

A crack resounded from the upper part of the ship. Like a spruce felled in the forest, the topmost portion of the foremast tilted and was thrown amongst the rigging astern it.

"Reef the sails, men!" Nikandr called above the roar of the wind.

The crew began lowering the sails as the wind intensified. It was so loud that most would no longer be able to hear Nikandr's commands.

The ship had now tilted to the point where the dozen men on deck, including Nikandr and Borund, were sliding toward the landward bulwarks. Nikandr landed well enough, but Borund cried out as the weight of the wounded man fell upon his ankle.

Gravlos fought hard against the controls, saying nothing as the ship tilted further and further.