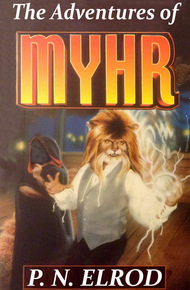 The Adventures of Myhr by P. N. Elrod

His name is Myhr—rhymes with purr!—he's half-man, half-cat, and all-adventure, traveling the multi-verse with Terrin, a twisted wizard who's into techno-raves and obscene T-shirt art. Displaced from Earth by a travel spell gone bad, they're heading home, bouncing from one bizarre planet after another.

Their latest hasty escape lands them on a world with a lethal magic problem. All the magic has vanished from Rumpock City, along with nearly all the magicians, the catastrophe linked to an uncanny black fog that rolls through town each night.

While singing Beatle tunes for his supper, Myhr grabs the interest of the gorgeous lady Filima, a not-so-bereaved widow in need of a fall-cat. It's up to Myhr to find where the magic went before Terrin's own powers are drained dry, leaving him worse than dead and the rest of the world going to Hell in an express-mail handbasket.

Many readers know P.N. Elrod's work because she writes great vampire fiction. She also writes great non-magical mystery fiction. But most readers never venture past what they know—and they should. The Adventures of Myhr features a man who is half human, half cat—and, as the tagline says, all hero. I love this book. It's campy and fun. You'll see why half the tropes in today's urban fantasy started with the writings of P.N. Elrod. – Kristine Kathryn Rusch

"I wish," I said, puffing hard because we were running flat out. "I really, really wish. You would. Develop your. People skills."

I'd have rolled my eyes, but needed to watch where we were going. It was midnight, with a lightning-shot sky dumping rain on us like daggers. Despite this, there were a number of angry locals hot behind us, either a lynch mob or an auto-da-fé, which I think is Latin for barbecue. The crowd supplied themselves for either possibility, having brought along both torches and rope.

No shoddy workmanship for Terrin, who is a wizard. When he decided to piss a person off he put a two hundred percent effort into it. On this occasion, for reasons best known to himself, he caused a bouquet of purple daisies to sprout out of the bald head of the town's mayor. Bad enough, but they'd been infested with some kind of bugs that gave the man an attack of amazingly ugly hives.

Unfortunately for us, the mayor was popular and had an army of large relatives all intent on avenging the family honor.

The thunder cracking overhead and the hiss of falling water kept me from hearing how close pursuit might be. Having the better eyesight after dark, I led the way, hoping to find some spot where Terrin and I could go to ground for a minute so he could get us out of this mess. His traveling crystals had been charged up for weeks, but times had been pretty good on this stopover, so we'd put off leaving.

We'd left the town in a random direction, striking off over ice rink-flat farm country. No matter where we went, we'd be seen.

"House," I said, pointing to a humped building with a thatched roof, the only thing in running range that might provide a temporary refuge.

"Okay." Terrin was shorter, but able to keep up as I tore over the ground, my boots making muddy salad of whatever crop the field held.

No lights showed ahead. The house turned out to be a barn. Good. We wouldn't have to deal with yet another irate local trying to kill us. One mob was more than enough. We ripped around and found a door, dragging it open.

Inside, I curled my lip at the sudden stink of damp livestock, then violently shook water from my soaked mane. My rust-colored fur would either droop or stick out in clumpy spikes all over my head, but grooming would have to wait. "How soon?"

I knew the drill; it would take longer than that for him to set up. We needed something to block the door in case the mayor's relatives turned out to be marathon runners. Some bales of hay were stacked neatly against one wall. I grabbed one in each hand and hauled them over. A few mice got dislodged. My ears swiveled to track their scattered retreat, and I repressed an urge to lunge. Not that I'm into chasing mice, much less eating them. The reaction was some deep instinct thing, nothing to get wound up about, put it down to my weird DNA mix.

I slammed the bales behind the door and went back for another two, then two more. But that wasn't the only entrance to the place. Another, larger door was at the far end. I didn't think there'd be time to take care of that one, too.

He was still rummaging.

He muttered something impolite as he dug. "Flashlight!" he snapped.

I took that to be a request, not an explicative, and shrugged my own pack from my shoulders. It was nearly pitch dark, for him, anyway, something I don't always remember. I prefer order over chaos and found my flashlight exactly where it was supposed to be. One click and its beam shone into Terrin's search area.

"Don't you throw anything out?" The inside of his bag looked like a Dumpster.

He snarled sudden triumph, snagging two perfectly formed clear quartz crystals. They were about an inch in diameter and as long as my hand. Terrin gave me one.

"Get ready," he said, dragging one heel along the floor to make a rough circle around us.

I was ready ages ago. Outside, the first of the mob had arrived and were pushing against the door. You'd have thought the deluge would have put them off. The bales would hold them for maybe . . . ahhh . . . no. The bales weren't holding at all. The top one tumbled down in a squashy crash as people on the other side applied muscle against wood. Yells of unholy glee ensued as they inched the door open against the rest of the barrier.

At the far end came energetic hammering on that door. It burst open. A bunch of big guys flooded in, wearing even bigger grins. And I thought I had teeth.