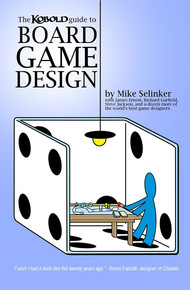 Mike Selinker is president of the game design studio Lone Shark Games, he has designed such games as Unspeakable Words, Risk Godstorm, AlphaBlitz, Lords of Vegas, and the Pathfinder Adventure Card Game. He worked on this book with an all-star list of game design contributors.

Kobold Guide to Board Game Design by Mike Selinker

Winner of the Origins 2012 award for Best Game-Related Publication!

The Kobold Guide to Board Game Design gives you an insider's view on how to make a game that people will want to play again and again. Author Mike Selinker (Betrayal at House on the Hill) has invited some of the world's most talented and experienced game designers to share their secrets on game conception, design, development, and presentation. In these pages, you'll learn about storyboarding, balancing, prototyping, and playtesting from the best in the business.

Whether you're a game enthusiast who wants a deeper understanding of the hobby, an aspiring designer looking to break into the industry, or a seasoned pro who knows there's always more to learn, there's something for you in the Kobold Guide to Board Game Design.

"Want to know how to design board games? We're really happy to feature this veritable all-star line-up of top board/card game designers taking you through the philosophy and reality of making games." – Simon Carless

The Game Is Not the Rules

Mike [Selinker] here. It's my job, as compiler and editor of this book, to give you an understanding of what will be in the book, whose job is to give you an understanding of what the game design process is like. So I'm doing that by getting out of the way. I'm going to introduce you to some of the finest minds in the business, with a little paragraph like this one in front of each essay. We'll start with a topic-setting essay by James Ernest, my primary board and card game design partner. He said what follows way better than I could. Listen up.

A game is a way to play by a set of rules. Good rules help you find the fun. Bad rules obscure it. But the rules are not, themselves, the fun. It sounds obvious when you say it like that. But game designers of all skill levels fall into the trap of believing that the mechanics and the game are the same thing.

A game is a whole package. It is not a collection of parts. A game can have a theme, a mechanic, a brand, a hook, a lifestyle. But these parts are not interchangeable with other games. It's only as a complete unit that the game resonates, draws attention, engages players, and becomes a part of their lives.

If you want to invent a new game, you have to do better than just improving on existing rules. You need to consider why the game, as a whole, will get into players' heads.

Recently I was on a panel of game experts at a local gaming convention. Someone in the audience asked, "What would you consider to be compelling game mechanics?" I had to answer, "There is something wrong with your question."

Game mechanics are like the parts of a watch. What would you consider to be compelling watch parts? I could tell you about bridges, wheels, and springs all day. But you'd be no closer to understanding what makes a "good watch." Nobody buys a watch because of its gears. Even the people who say they do.

Game mechanics are like watch gears. A "compelling" game mechanic only makes sense in context. Transplant that mechanic into another game, and there is no guarantee that it will work.

This is not to say that games can't borrow mechanics from each other. They certainly do. But blindly transplanting pieces from one mechanism to another is a terrible way to design. You can't just throw a bunch of random watch pieces together and expect them to tell time. You must have a plan.

When you break a game down into its component parts, you can certainly learn about that game. But you can't apply very much of what you've learned toward creating a new one. Breaking something down into components really only teaches you about the components; it obscures your perception of the whole. A map of Spain tells you very little about the New World.

It's hard to be a creator when all you have is critical skill. That's why the jobs of critic and creator rarely overlap.

If I ask the question "all good watches are (blank)," what do you say? The whiteboard is empty. Begin.

They have hands. They have a face. They have numbers. They are precise. Accurate. Fashionable. Affordable. They tell time. Uh, they have gears. They use electricity. They have an alarm. And so on.

Keep throwing things out there, and I'm sure I can think of a counterexample for each one. A watch without hands, for example. And I can also think of something that is not a watch that has most of these things. In fact, a varsity football player makes it most of the way through the list.

Did that get us anywhere? It depends. We've thoroughly defined "watch," but we aren't much closer to making a new one. Hitting everything on the checklist is no guarantee of being good. And plenty of watches have little in common with the list.

The player is the consumer of the game. It's his opinion you should really be courting. What makes someone buy a new watch? Functionality. Practicality. Fashion. People buy watches to express who they are. Even if "who they are" is summed up as "I bought a cheap watch because I don't care to express who I am through my choice of watch."

So to make a new watch, you have to consider aspects of the marketplace and the mind of the consumer. The mechanics of the watch are basically a given. Getting a customer to notice you has almost nothing to do with that.

Games are the same, only (I think) more complicated. In part, the job of analyzing and defining game is harder because it's not as easy to see the moving parts. When a game-maker does his job correctly, most of the moving parts are invisible, even when you break open the case.

And games have this weird albatross word that, I would guess, watches don't have. That word is "fun." I don't think a watchmaker feels like he has to make his watch "fun," though some clearly do. When we try to define "fun" we usually spin our wheels for a while, and then we realize that we are just recapitulating the process of defining "game," and we're back where we started.

And yes, the same thing I said about the watch list applies here too: I can think of a counterexample for every one of these, and I can also think of things that aren't "games" that hit most of these marks. Like maybe a disco.

What does all this mean? Let me restate my premise: I don't think you can learn how to invent a new game by smashing an old game and measuring the pieces. All that tells you is how to make a copy of it. Maybe your version will be an incremental improvement, and maybe not. But it won't be new.