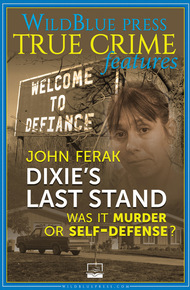 A native of Plainfield, Illinois, John Ferak's first true crime book, BLOODY LIES: A CSI SCANDAL IN THE HEARTLAND (Kent State University Press) chronicled the tragic farmhouse killings of Nebraskans Wayne and Sharmon Stock and the ensuing CSI scandal that sent prominent CSI director David Kofoed to prison. BODY OF PROOF, published by WildBlue Press in July 2015, uncovers more of Kofoed's questionable work in a fascinating murder case. Since 2012, Ferak has worked as an award-winning investigative team editor for Gannett Wisconsin Media, based at The Post-Crescent in Appleton, Wisconsin. DIXIE'S LAST STAND was his first book for WildBlue Press.

Dixie Shanahan had a terribly troubled and abusive marriage in the sleepy little town of Defiance, Iowa. Then one summer day in 2002, Dixie's mean and wicked husband was gone. Some of the local residents presumed that Scott packed his bags and left town. But others were skeptical. After all, Scott's brown Ford pick-up truck was still parked in his driveway. The disappearance mystified Defiance for more than a year. Then in late October, 2003, the truth emerged … or did it?

Too many times we read about abusive relationships, and the initial victim ends up hurt, or dead. I wanted to include this particular story because… well, let's just say that while it's a true crime novel, the initial abuse isn't the crime being investigated. – David Niall Wilson

It was a cold, blustery afternoon in the middle of December in western Iowa. It was time for Robert McConnell to make his rounds reading the town's water meters. Normally, McConnell worked as a painter. He had lived in Defiance, Iowa, since the mid-1970s. He had read the little town's water meters for three years. He liked the routine and was highly efficient.

Just like clockwork, McConnell walked the town every fifteenth day of the month. And it barely took him three hours to complete the task. Nobody would confuse Defiance with Iowa's largest metropolitan city of Des Moines.

Besides the post office and city hall, there weren't a lot of buildings in the heart of town to lure in daytime visitors. During weekdays, it was rare to find more than a few vehicles parked along Defiance's main drag. Most residents flocked to the neighboring cities of Denison or Harlan to work or to shop. On weekends in Defiance, the hot spot where locals came to unwind was a tavern called Tobe's Place. People drank tap beer, ate grilled burgers, and swapped the latest small-town gossip around rural Shelby County, Iowa.

One of the homes on McConnell's meter-reading route was a well-kept ranch with a large yard that encompassed two acres. Several large evergreens and shade trees gave the property a secluded feel. Built around 1980, the gray-colored ranch once belonged to the late Al and Beverly Feser. After Bev died in 1994, her only child, Scott Shanahan, inherited her home. By 2002, he lived there with his wife, Dixie, and their two young children.

But back during the winter of 2002, McConnell noticed something odd and peculiar when he wandered onto the Shanahans' property to read their water meter tucked in the corner of their backyard. It was one of the back windows, in the northeast corner of the home.

If this were Orlando, Atlanta, or Phoenix, having an open window in the middle of December would be no big deal. But Defiance, Iowa, was in the midst of a typical Midwestern winter. This meant plenty of snow and frigid temperatures over the course of several months.

Actually, McConnell first noticed the wide open back bedroom window when he made his regular meter-reading rounds around November 15, 2002.

Sometime early in the spring of 2003, someone closed that window shut. And the window stayed shut during the rest of the year.

Veteran Shelby County Sheriff's Deputy John Kelly rolled his cruiser out of the county seat in Harlan, Iowa. He passed countless rows of tall cornfields and plenty of rustic barns during his fifteen-minute drive north along U.S. Route 59. Inevitably, a large brown sign proclaimed, "Welcome to Defiance." There, Kelly slowed his squad car and turned into the sleepy western Iowa town. Like most small-town cops, Kelly was a jack-of-all trades. He responded to crashes and scouted for speeders and motorists who were disobeying traffic laws. He conducted criminal investigations. He also was a firearms instructor. And with twenty-six years of experience on the sheriff's department, Kelly was quite familiar with the names and faces of folks residing around Shelby County, Iowa, notably those in the quaint and friendly small towns.

With barely a hundred residential rooftops in Defiance, it did not take Kelly long to find his destination that summer afternoon on July 22, 2003. The gray-colored ranch at 206 Third Avenue already had been a frequent hot spot for the Shelby County Sheriff's office in recent years. Homeowner Scott Shanahan had been a frequent flyer in the Shelby County Jail. Scott had been arrested three separate times by the Shelby County deputies from 1997 to 2000. All three episodes involved explosive and hideous incidents of domestic violence. Because of those interactions with Scott Shanahan, sheriff's deputies also were well acquainted with his often bruised and battered wife named Dixie. By the summer of 2003, the Defiance couple was raising three young children. Their youngest child, a baby girl, was just born that March.

As soon as the deputy parked in the driveway, Dixie Shanahan ran outside. She met the sheriff's deputy on the sidewalk, near the front bay window. Dixie wasn't in a friendly mood. She was curious why Kelly had the nerve of pulling into her driveway. She thought the cop's appearance during the middle of the day would surely create a stir around the small-town rumor mill. Unbeknownst to her, rumors were the primary reason why Shelby County Sheriff's Deputy Kelly had dropped in at Dixie's residence to speak with her in the first place.

"There had been rumors that had been brought to the sheriff's attention that Scott was missing," Kelly told her.

Dixie reacted by claiming she had not seen her no-good husband for an entire year. She guessed that she last saw him sometime the previous August. The last time the couple supposedly spoke was over the phone roughly six months ago, she told Kelly.

In that situation, Scott had called, demanding that he be present in the hospital delivery room to witness the birth of their third child. "Dixie said that she told him that he would not be present," Kelly stated. "She would fight to keep him from being there while the baby was born."

Indeed, Scott was a no-show for the March 2003 birth of his little girl. And after that, he made no further attempts to contact Dixie. He never once tried to see his newborn baby at any point in 2003. He never tried to visit any of his three children for that matter.

And yet, Scott Shanahan's brown, Ford pickup truck remained parked in his driveway. It was as if Scott hadn't left the house.