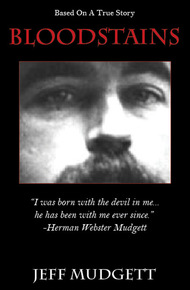 Jeff's trial law career came to a screeching halt when his Grandfather revealed a well kept secret- their direct ancestor was the serial killer, HH Holmes, perhaps the most evil man who ever roamed the earth. Jeff's life turned to researching the historic facts about the monster. Unsatisfied with all previous work about Holmes, Jeff decided to write his own—Bloodstains.

Bloodstains is the startling tale of one man's search for the truth after inheriting the personal diaries belonging to his great-great-grandfather who he discovers was America's first and most notorious serial killer Herman Webster Mudgett. Better known by his alias H.H. Holmes, Mudgett was the mass murderer who struck terror into the nation by being the proprietor of the infamous Murder Castle and stalking the streets of Chicago during the 1893 World's Fair. During his incarceration awaiting execution, well over a century ago, Holmes admitted killing 27 innocent victims, but the evidence the author locates indicates hundreds more likely. From his investigation, Jeff Mudgett, the direct descendant, learns that Holmes' reign of terror was worldwide and not limited to Chicago as has been so widely believed. Based upon never before revealed historical facts, Jeff pieces together a dynamic and extraordinary puzzle, including the strong possibility that Holmes was also Jack the Ripper.

Far more than a documentary, Bloodstains is precariously balanced on the very edge between non-fiction and the paranormal, as the author's research of his evil ancestor quickly takes on a personal aspect. Jeff soon fears his efforts may have awakened the legendary 'Holmes Curse' of the 1890s, the one investigated and written about by most of the nation's major publications, including The New York Times. In fact, the deeper he digs into Holmes' devilish past, the stronger the monster's hold on him seems to become, testing the limits of his own sanity, as well as humanity. Racked by a mysterious and never before experienced epilepsy, Jeff suffers crippling grand mal seizures whenever he disobeys the haunting voices in his head. Finally, with nowhere else to turn, Jeff is forced to make the decisions of his genetic lifetime in a life-or-death struggle in order to win the greatest prize of all: his survival.

Last year I listened to the book The Devil in the White City, and learned the story of H. H. Holmes, who murdered as many as two hundred people in Chicago near the time of the 1904 Worlds Fair. Then I met Steve Mudgett… a descendant of Holmes, and learned of this book. The author inherited diaries… this is not a story for the squeamish. – David Niall Wilson

Before midnight, between trains the station is quiet. The Englewood stop, just south of Chicago, stays that way until about twenty minutes before every arrival. Then the station slowly comes to life.

The terminal consists of a large flat sided two-story building that buttresses a long wooden platform. A nondescript thing, the station's only colors are its drab coverings and the foliage of planted trees. Oftentimes, like tonight, the crisp wind off the lake crystallizes the night, freezing those waiting and making the station seem not of this world. Dreary and dismal, even by the light of day, none come here unless they have business. If wise, none come here alone and in the dark.

Amidst the shadows, a fine and courtly figure watches from the second floor window in the workroom loft, anticipating the train and its disembarking passengers. At this ungodly hour, with none of the daylight hustle, the station is perfectly suited to his needs.

Two miles from the station the last northbound train approaches, its flood the only light strong enough to pierce the misty night. Inside the train, a conductor, his day near done, makes his way down the center aisle announcing, "Next stop Englewood & 63rd!" He glides through the ten cars and wakes the departing passengers giving them just enough time to disembark before the train shortly resumes its way to Chicago.

Oh yes, he remembers hurrying back from nine, the young lady in seven. Squinting at the seat numbers swimming before his weary eyes, he finds her and lightly touches her shoulder. "Young lady, your destination," he offers in a subdued voice, her softness and charm having motivated his fatherly concerns. She is strikingly beautiful, unapproachably so. Dressed formally, her layered clothes, hat and stitched boots radiate femininity.

Smiling sweetly, she stretches while awakening and murmurs, "Why, thank you, sir. We seem to have arrived so quickly. It's as if the entire trip was a dream." She brushes the loose strands of her hair back under her hat, gathers her things and inspects outside the window. It's so cold and dark. She wishes she had taken her mother's advice and bought the more expensive ticket for the earlier train.

At the station the bell above the main entrance doors rings, muffled by the wet air. It announces the arrival of the midnight train. Heavy boots beat across the wooden platform sending a shower of rocky dust down through the cracks to the earth below, as personnel ready the accommodations for arrivals. From the inky darkness the train's huge mass of steel is a relentless force of rushing wind and sound as it emerges through the fog, only to be lost again amidst its own huge white puffs of pressurized steam that cloud the station in heavy mist. Within seconds of stopping, people emerge from the train, shivering in the cold then quickly dispersing towards their destinations. Had anyone been paying attention they would have noticed a gentleman, dressed all in black, purposefully moving across the stand. He is illuminated for just seconds before disappearing back into the shadows.

With the discerning eye of a jungle cat hidden amongst the trees, the shadowy one keeps his distance. Tonight's offering is once again sparse. Those that are available are hardly worth the effort.

Just when he is ready to give up he spots her, a striking young lady with a beautiful smile and a lively spring in her step. He watches her collect her bag and walk down the sidewalk through a small group of passengers, heading, he's sure, towards the hotel the conductor was paid to advise her to seek out.

His eyes stay fixated upon the young lady. Her beauty cannot be hidden, even by this bleak night on the devil's own platform. Blood surges through his veins— he must know this one.

Not wasting a single moment he moves quickly, deftly even, to ensure that she is guided in the proper direction. As she looks up their eyes lock and she is startled by how unusual his are. They are as blue as the ocean and so in contrast with his blindingly white complexion. She has no choice but to blush scarlet as her gaze falls to her feet. Having given her enough, he falls back and short-cuts to where he knows she is destined for; the place he designed, constructed and has operated for the last two years now known as The Castle.

A few steps later the dark bulk of the medieval looking hotel looms in front of her. The front wall rises from the moat-like sidewalk and high above, a row of perfectly balanced bay windows angle down almost as if aimed at her and her alone.

She admires the architecture, taking in the remarkable construction. The building's turreted roof and exotic cornices steal her breath away. Plastered on the wall is the advertisement: "World's Fair Hotel." With Jackson Park and the World's Fair just a short carriage trip due east, the Castle is open twenty-four hours a day. The hotel always has a vacancy for the young, the attractive and the unattached female.

Entering she finds it pleasantly warm and smelling of fragrance. She is awestruck by the imposing semi-hexagonal entranceway and the columns of cut glass windows. Her mesmerized reaction has been scripted down to the slightest intake of air. Nothing has been left to chance.

The door-side attendant rushes to take her bag from her hand, directing her to the front desk and uniformed manager.

"May I help you, young lady?" the manager asks, having been instructed minutes before her arrival on what he is to provide her.

"Why, yes, please, may I have a room for one night? I am here to seek employment at the Fair," she joyously rambles, already comfortable in such a homey place.

"Of course," he replies, having heard the same hundreds of times. The manager provides her with the doctor's favorite room, one in which privacy is guaranteed. "Excuse me miss, we have a service reserved especially for those young ladies working at the Fair… Would you like us to notify your family as to your whereabouts? We can have a notice delivered within two days."

"How thoughtful, let me give you my mother's address." She scribbles on a note card and hands it over to the manager with a smile.

In turn the manager slides her room key across the counter. The young lady grasps the key and heads for the stairs. The manager smirks as he glances at her address and her naïve admission. He files the note, its purpose to arise soon thereafter.

Color coded gas jets, gorgeous frescoed stucco craftsmanship and black and white diamond shaped flooring direct her up the swooping stairway to her room, her baggage delivered immediately behind her. Despite being intrigued by the room's European décor, the young lady, exhausted by her travels, blows out her candles and is in bed within minutes of changing her clothes. From a peephole beside a picture hanging on the wall she is watched, the observer waiting for the perfect moment to proceed. When it arises she never realizes or suspects a thing, enjoying her warm dream started only minutes before by a barely detectable stream of chloroform gas seeping in under her bed. When, where and how she awakens is now a matter of choice for her new master.

She dreams of two men entering her room from behind a secret panel, escorting her to a chute at the back of the hallway where she is lowered and dropped away. She plummets some forty feet and lands with a cushioned whoosh. All around her are images of death lit by candlelight.

What could have fostered such a horrible nightmare? She half asks herself.

Still dreaming, so she thinks, she is stripped of her clothes by two other men, placed upon a steel gurney and restrained by her ankles, wrists and forehead. Assistants rush to and fro preparing for surgery in what seems to be a hospital operating room.

He arrives, once the shadowy figure, now the surgeon, and donning his apron, he inspects her body for any imperfections that might disqualify her. Finding none he determines her quality to be exceptional. Deciding to proceed he prepares to take from her what he needs, but this time, rare indeed, he elects to ensure that she survives the procedure. Her elegance has piqued his interest. Without further delay his steady hand and razor-sharp scalpel go to work. He hums the entire time.

During the procedure he turns to the small writing desk alongside the table to find his favorite leather-bound volume. His bloody hand sets down the scalpel and cracks open the book, the previous experiments' remnants snapping open in protest, as they give way. There in the stained margin is the fountain pen the doctor uses to record his surgical observations. Back and forth, pen to knife, knife to pen… his unmistakable penmanship detailing her surgery and life to come.