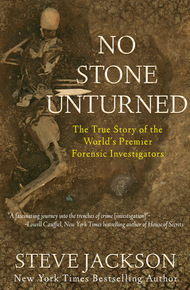 New York Times bestselling author Steve Jackson has more than twenty non-fiction and fiction books to his credit published by the likes of HarperCollins, Simon&Schuster, and Kensington, as well as his own publishing company WildBlue Press. Jackson is one of America's top true crime writers known for such highly praised works as MONSTER, NOT LOST FOREVER, and NO STONE UNTURNED. His journalism career spanned twenty-five years and included numerous national awards for writing and investigative reporting. He has also taught writing and journalism at the university and college level.

No Stone Unturned by Steve Jackson

A body stuffed in a car trunk swallowed by the swirling, muddy waters of the Missouri River. A hiker brutally murdered, then thrown off a cliff in a remote mountain range. A devious killer who hid his wife's body under a thick cement patio.

For investigators, the story is often the same: they know a murder took place, they may even know who did it. But without key evidence, pursuing a conviction is nearly impossible. That's when they call NecroSearch International.

Necrosearch boasts a brain trust of the nation's top scientists, specialists, and behaviourists who use the latest technology and techniques to help solve "unsolvable" crimes, no matter how decayed the corpse, no matter how cleverly the killer has hidden the victim's body.

In NO STONE UNTURNED by New York Times bestselling author Steve Jackson readers are taken on a fascinating, often-shocking journey into a realm of crime investigation of which few people are aware. Necrosearch's most challenging cases are described, step-by-step, as these modern-day Sherlock Holmes's detect bodies and evidence thought irretrievable, and testify in court to bring cold-blooded killers to justice.

I listened to the audio version of this book, and was introduced by the narrator to the author, Steve Jackson. Anyone interested in forensic work will find this a remarkable story, where experts from a lot of different disciplines came together for one purpose… to figure out how to locate dead bodies. I particularly recommend this to writers as a source book. – David Niall Wilson

I shall be as secret as the grave.
—Miguel de Cervantes, Don Quixote

The two men worked quickly in the dark around the beat-up two- door sedan perched on a boat ramp facing the river. The night air was as thick and muggy as a sauna. Quiet except for the whine of a million insects, the gentle lapping of the river, and the muted voices of the men.

Alone among the shadows that haunted the heavily wooded bank 45 miles northwest of Maryville, Missouri, the pair fixed a tree branch between the steering wheel and the front seat to keep the car from veering. They took another stick and wedged it between the gas pedal and the driver's-side seat, the pedal pressed to the floor.

One of the men leaned in and turned the key in the ignition. The car roared to life; the engine screamed to hurry and get it over with. The man threw the transmission into drive and stepped back, closing the door as the maroon Oldsmobile lurched forward, down the ramp, and into the river.

The water quickly drowned the engine, but it had served its purpose. Momentum carried the car out into the current, which grabbed the vehicle—still afloat even with the driver's-side window open— and dragged it downstream.

Tony Emery and his childhood pal, Ron Coy, watched the car slip deeper into the water. That's when Emery noticed the woman's purse lying on the boat ramp. "Shit!" he exclaimed. He'd meant to put it in the car. He picked it up and tossed it as far as he could toward the water.

Coy didn't say anything, but he was thinking that tossing the purse into the river was a dumb move. No telling if a fisherman would find it hung up on some bushes along a bank and report it to the police. Someone might come looking here. But saying that to Tony Emery, even if they were friends, wasn't a smart idea either.

"No witness, no case." Emery shrugged and grinned. He was a big guy—barrel-chested, weightlifter arms—and good-looking, with a head of thick, dark hair. But he was as mean as he was handsome, the town bully of tiny Maryville, eighty miles due north of Kansas City.

With a population of about 20,000, Maryville was a quaint little town: courthouse in the middle of town square, the home of Northwest Missouri State University. Everybody in town and for miles around knew Emery, and many feared him and his "enforcer," Coy, who, though only five-feet-eight, was a walking 200-pound muscle with a crew cut, beady eyes, and a nasty attitude. Bad things tended to happen when someone crossed Emery or his family. He considered himself beyond the reach of the law, treating it and its sworn officers with disdain.

The Maryville Department of Public Safety, the Nodaway County Sheriff, and the Missouri State Highway Patrol had been after Emery for years, but they could never make much of anything stick. In 1979, he was convicted on a penny-ante charge for possession of burglary tools, and he spent two years in the state penitentiary.

Upon his release, he swore he'd never go back. But that didn't stop him from expanding his criminal activities into dealing methamphetamine. It only made him more determined to stay one step ahead of the law.

With its penchant for guns and violence, the meth trade was perfect for a guy like Tony Emery. Anywhere he went, he went armed, and if he needed a little extra muscle to intimidate the locals, he called on his good friend Ron Coy.

By 1987, Emery had decided to take over the region's methamphetamine distribution, first in Maryville and then expanding to include all of northwest Missouri and southwest Iowa. It was a lucrative enough business to build a home, buy others for rentals, purchase an $18,000 truck and a $40,000 sports car, plus have enough cash on hand to buy pounds of meth at $10,000 a pop. The police believed the whole family was involved, including his mother, who they discovered had plunked down $40,000 in a single year toward the principal on her mortgage. All of it—the houses, the vehicles, the mortgages—paid for in cash.

With so much at stake, Emery let it be known that he would fight to keep what he viewed as his. He carried a huge .44 magnum handgun, purchased for him by his mother because he was a felon and not legally allowed to buy or own firearms. He also kept an assault rifle close at hand in his home.

Capitalizing on his reputation for violence, he moved quickly against threats to his monopoly. When one lowlife tried to set himself up in the methamphetamine business in Maryville, Emery sent him a message. With his henchmen, Coy, Emery went to the young man's home, stood outside on the street, and shot the walls and windows full of holes. The young man quickly left town.

Cold and calculating, Tony Emery was smart enough not to use meth himself. "It'll screw you up," he told his associates. But while he didn't use it, many of Emery's distributors were addicts, such as Christine Elkins, the 32-year-old girlfriend of one of his drug-dealing pals, Bob Clark.

It was through Christine that the police tried to get him again. Along with agents of the U.S. Bureau of Alcohol, Tobacco and Firearms, they used her to nail him on drug and weapons charges. With her testimony at Emery's upcoming trial in September, they thought they would have enough to put him behind the walls of the penitentiary for a long, long time.

However, that night as he watched the Oldsmobile drift out into the current and at last sink beneath the swift, dark waters of the Missouri, Emery knew he wasn't going to have to worry about Christine Elkins testifying. Her whereabouts would be as secret as the grave. And if the cops didn't have a witness, they wouldn't have a case. But then, Emery had never heard of the Pig People.