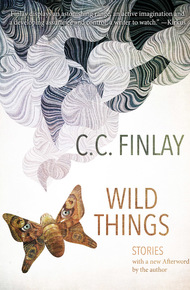 C.C. Finlay is editor of The Magazine of Fantasy & Science Fiction, and the author of four novels and one story collection. His short fiction has been nominated for the Hugo, Nebula, Sturgeon, and Sidewise Awards, and has been translated into more than a dozen languages. He's been an instructor at Clarion and other writing workshops, and is currently a resident editor for the Online Writing Workshop. In 2003, he founded the Blue Heaven Novel Writers Retreat, which has graduated some of the most respected writers in the genre. His service work includes sitting on juries for the Philip K. Dick Award and the Andre Norton Award, as well as volunteering on committees for the Science Fiction and Fantasy Writers of America. He is married to New York Times bestselling and award-winning novelist Rae Carson. They like sunshine and live in Arizona.

C.C. Finlay's story collection Wild Things was originally published in 2005. These fourteen stories show Finlay's range, from hard science fiction, to space opera, sword and sorcery, Arthurian fantasy, alternate history, horror, humor, and experimental fiction. The collection includes "The Political Officer," which was a finalist for the Hugo and Nebula Awards, as well "We Come Not To Praise Washington," his alternate history take on Alexander Hamilton, which was a finalist for the Sidewise Award. This 2016 edition contains all new story notes by the author.

I first met Charlie (virtually) when he became the editor of The Magazine of Fantasy and Science Fiction in January, 2015. When I began choosing titles for The Story Collection StoryBundle, I wondered if this short story expert had a collection of his own. No surprise—of course he does! And we're in luck because Charlie specially prepared the ebook of his fine hardcover collection, Wild Things, for StoryBundle. Fasten your seatbelt—you're about to travel from a high fantasy King Arthur tale, to mining asteroids in deep space, to the American Revolutionary War, and much more in The Story Collection StoryBundle. – Lisa Mason

He was the sort of boy who always had a stick in his hand unless he chanced to have a stone. Today he held one of each as he ran in the mote-stirred sunlight. He skirted the plashes of water, pressed through the bulrushes, and paused on a small rise with his head cocked alertly.

"He's a nuisance," Howl muttered, sitting on a branch.

"I like him," Pooka whispered from his perch beside Howl.

Pooka snatched a ball of sunlight from the air and spun it, thrust fingers in his mouth and emitted a bird-loud whistle. He tumbled backward off the branch, landing on his feet just as the rock clipped Howl on the temple. Tiny periwinkle trousers cartwheeled through the air and Howl crashed upside down in the bushes. Pooka laughed.

A stick javelined into the leaves, resulting in a cry of "Oof!" Before Pooka could react, the boy landed on the pile and grabbed Howl.

"Oh no you don't," Pooka answered, but not so the lad could hear him. He and Howl were almost as tall as human toddlers, but thinner and weighed much less. Buzzing like a hive of hornets, Pooka jumped on the wild boy's head, drew his little dagger, and inflicted several quick pricks across the scalp and neck.

The boy flailed his hand at the back of his head. "Eyah!"

"Bzzzzzzz," Pooka hummed as he jabbed again and again.

Dropping Howl, the boy leapt up and ran away. Pooka clung to a handful of his hair, bouncing wildly on the boy's shoulder and buzzing with all his might. On impulse, he sawed through the strands with his blade rather than let go. Then he flitted to the ground and ran back to Howl's side.

His companion sat there, massaging a knot on the side of his head. "Why'd you do that? It was close—he nearly caught me!"

"Did not! He heard your stupid whistle and caught that flash of glamour, didn't he?"

Pooka held out his hand, hauling Howl to his feet. "He hit you with the stick after you fell off the branch. Once he spotted you, he kept sight of you."

"And snatched you with that first nab of his too. Quick hands. What're the chances of that?"

Howl wrinkled his brow. The two of them looked over at the boy, who, not so far away, still spun in circles brushing wildly at the back of his head.

"If he's mud-spattered, ratty-haired, and frog-legged, then he must be related to you." Pooka plucked a dappled pink foxglove blossom and twirled it on his finger. "Mind you, I'm rather handsome."