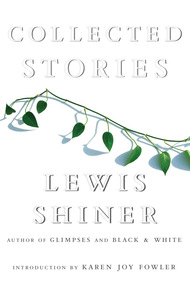 Lewis Shiner has published seven novels, including Black & White, Deserted Cities of the Heart, and the award-winning Glimpses, all available from Subterranean Press. He has also published four short story collections, including the career-spanning Collected Stories, as well as journalism and comics. Virtually all of his work is available for free download at www.fictionliberationfront.net.

"Shiner doesn't work through dazzle, diversion, or sleight of hand. His prose is a model of clarity. When you come to the end of a story, you know what happened; you know how Shiner feels about it... The emotional world of these stories feels very like the real world to me."

—Karen Joy Fowler, in her Introduction

His best known stories are all here, including "The War at Home," "Twilight Time," "The Circle," "Perfidia," and "Mozart in Mirrorshades," as well as a brand new story, "The Death of Che Guevara."

Containing 41 stories and extensive author's notes, Collected Stories is the definitive compilation of Shiner's short fiction, and shows why Publishers Weekly praised his "exquisite story construction" and why Jonathan Carroll said that he "writes with enough heart for three chests."

I first read Lew's graceful science fiction stories in the 1990s genre magazines. What an astonishment to discover he has, over a multi-decade career, written mainstream, dark fantasy, cyberpunk, historicals, a wonderful miniseries of hard-boiled detective stories, and even a western or two. You'll find them all in Lew's Collected Stories, with (coincidentally) an Introduction by another Story Collection StoryBundle author, Karen Joy Fowler. Enjoy this multi-talented author's genre-spanning short fiction in The Story Collection StoryBundle. – Lisa Mason

He had the back of the hospital bed cranked upright, the lower lid of his left eye creeping up in a warning signal I'd learned to recognize as a child. My older sister Ann had settled deep in the recliner, and she glared at me too, blaming me for winding him up. The jam box sat on the rolling tray table and my father was working the remote as he talked, backing up my newly burned CD and letting it spin forward to play a few seconds of low fidelity trombone solo.

"You know the tune, of course," he said.

"'King Porter Stomp.'" Those childhood years of listening to him play Glenn Miller on the console phonograph were finally paying off.

"He muffed the notes the same way on the Victor version."

"He wouldn't have played with a rabble like that." The backup musicians teetered on the edge of chaos, playing with an abandon somewhere between Dixieland and bebop. "They sound drunk."

My father had a major emotional investment in Miller. He and my mother had danced to the Miller band at Glen Island Casino on Long Island Sound in the summer of 1942, when they were both sixteen. That signature sound of clarinet and four saxes was forever tied up for him with first love and the early, idealistic months of the war.

But there was a better reason why it couldn't have been Miller playing that solo. If the date on the original recording was correct, he was supposed to have died three days earlier.