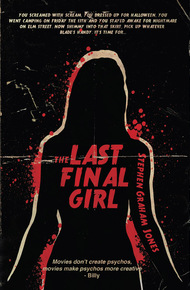 Stephen Graham Jones is the author of Mongrels, Zombie Bake-Off, Demon Theory, The Ones that Got Away, It Came from Del Rio, Growing Up Dead in Texas, and probably twice that many more. Stephen's been an NEA Fellow, a Stoker Award finalist,

and has won the Texas Institute of Letters award for fiction. He lives in Boulder, Colorado, and teaches in the MFA programs at CU Boulder and UCR Palm Desert.

Life in a slasher film is easy. You just have to know when to die.

Aerial View: A suburban town in Texas. Everyone's got an automatic garage door opener. All the kids jump off a perilous cliff into a shallow river as a rite of passage. The sheriff is a local celebrity. You know this town. You're from this town.

Zoom In: Homecoming princess, Lindsay. She's just barely escaped death at the hands of a brutal, sadistic murderer in a Michael Jackson mask. Up on the cliff, she was rescued by a horse and bravely defeated the killer, alone, bra-less. Her story is already a legend. She's this town's heroic final girl, their virgin angel.

Monster Vision: Halloween masks floating down that same river the kids jump into. But just as one slaughter is not enough for Billie Jean, our masked killer, one victory is not enough for Lindsay. Her high school is full of final girls, and she's not the only one who knows the rules of the game.

When Lindsay chooses a host of virgins, misfits, and former final girls to replace the slaughtered members of her original homecoming court, it's not just a fight for survival-it's a fight to become The Last Final Girl.

A wide grimy blade cuts into a neck hard before we can look away, the blood welling up black around the meat, the sound wicked and intimate.

Before we can even process the rest of the scene—it's night time, it's that cabin in the woods we all know, it's a blonde girl standing there shrieking—we back off this kill, come around behind this guy's body that's already twitching, is only held up now by the blade, we back off so we can see through the new wedge carved out of his neck.

So we can see the blonde girl framed by it, her bikini top spattered with blood and gore, her chin moving with her mouth, her mouth trying for a word but—

The screen doesn't fade to black, it slams there, takes us with it, takes us straight to a girl's voice, shaky like this is a second try: "I guess it probably started when that Halloween supply truck crashed off the road."

"I didn't even know there were Halloween trucks, right?"

Nervous laughter, the weepy kind, then close on this voicingover girl's delicate white fingers twining her short blonde hair, and we stay there for the next bit:

"I guess that's where he got the idea, though. The mask, anyway.

And then, well, we were just out there for some free costumes, you know? It was just supposed to be a fun weekend, and I mean, they're not biodegradable, would probably just kill fish—just kill the raccoons—" but her voice is already breaking up again, because of all this violence in the woods, that night.

We're still behind the action. It's exactly where we left it.

The jock who had his neck cut into, his head rolls too far over then folds back, is upside down, looking straight at us, his eyes still alive.

A boot chocks up on his thigh, pushes him down, away. Discarding

Then that blade—it's an actual longsword?—it points across at the girl, is Morpheus calling Neo in to spar, is Christopher Lambert being polite before the beheading, and we see what this girl's seeing: some complete freak in an unlicensed Michael Jackson mask.

The pale, grinning lips have had their redness scrubbed off but are locked into some latex grin, and the eyeholes are sagging, and there's more eyeliner clumped on, but it's him, right down to the red and gold letterman's jacket.

In case we don't get it, though, that Thriller baseline digs in.

The girl's turned, is running hard through the trees, her labored breathing the main sound now.

Once the guy's dead, the slasher steps past, after this girl, and we cut ahead, to her crashing through the trees blind. Scratching her arms on the branches, crying, her bikini top trying to come off but she's just managing to hold onto it.

Behind her, the slasher hears this. It stops him. He looks down to his jacket, all around, such that we can read his mind: Billie Jean? Still, this is what it is.

He slices an innocent sapling out of his way, steps through with authority, and, now, because of what she's calling him, there's some legitimate anger, too. Like, before it was just business for him.

Yards ahead of him, the girl bursts from the trees, almost goes falling off a sudden cliff.

A hundred feet below is a river, moving so fast we can even see the whitewater at night, and hear it all around.

"No no no no no," the girl's saying, casting around for a bridge, a hang-glider, a parachute, a zip line, a magic door, anything. Instead, behind her something huffs air, announcing itself.

She steps back, so close to the edge that the sole of her left shoe is in open air, little flakes of shale crumbling off into space behind her.

Then she sees the eyes, and they're too tall, too wide.

She's just shaking her head now, mumbling a prayer, making a deal, and it must be a good deal because what steps out isn't the next monster in this nightmare, but a tall, regal horse, its skin jumping in the moonlight, steam coming from its nostrils.

We can hear it.

"Come here, boy," she says, holding her hand out. "It wasn't your fault, I know, he shouldn't have tried to ride you, he knew I was the only one who could—"

Wildfire stamps, blows. Isn't ready for any apologies yet, apparently.

But there's a reason: Billie Jean's standing there, just past the trees.

The girl backs perilously close to the edge again, even has to wave her arms, and's about to go over when—

The longsword thrusts out, cuts into her shoulder and out the back, holding her there, a drippy ribbon of blood draining down the blade to the cross guard, those drops plummeting down to the crashing river, the river pulling them instantly away.

Back to the cliff, though.

The girl's trying to scream now, doesn't have the breath anymore.

"I thought I was dead," she says in voiceover. "I thought that's why Wildfire was there. That I was in heaven. But Billie Jean had followed me there too, so I knew it was . . . it was the other place."

Billie Jean dials the blade over as if in response to being called that again, opening the girl's chest for more blood to pour out, the sharp edge pushing on the bikini strap now, like a blood-slick breast is exactly the thing we all want to see.

Still, Billie Jean seems interested, is acutely aware he's about to cut through that delicate string, is so concentrated on it in fact that he doesn't feel the horse's head, suddenly long and alien beside his own, those massive jaws practically resting on his shoulder.

He shoulder-butts the horse but the horse just blows.

Billie Jean hauls the girl around to the side, over ground instead of a hundred feet of nothing, and fixes his boot in her chest, slides her off his sword. Then he turns to face this interfering horse, maybe the only thing big enough to finally take him down once and for all.

The horse rears, slashing with its hooves, and Billie Jean has no choice but to fall back.

"Kill him, Wildfire!" the girl screams from her place on the ground, one hand trying to hold her shoulder together, her face tearstreaked, her bikini top even more tenuous now.

When Wildfire finally comes down, Billie Jean steps forward, swinging his sword like a baseball bat into shoulder meat, stopping short at the bone.

Shaken, he steps back, remembers his fencing. He feints at Wildfire's shoulders but cuts across the face instead, a little slow-motion on that blade-through-eyeball number, the horse screaming in a way that hurts our heart.

"Nooooo!" the girl screams as well, reaching, having to hold her bikini top on now.

It's too late, though.

Billie Jean's going to work, is slicing into Wildfire from wherever he wants, just flaying the horse open, getting the other eye as well.

Finally he brings the sword all the way back to swing for the bleachers, go for the horse decap we're all secretly waiting for now that it's gone this far, but something's got his blade.

She has her bikini top wrapped around the sword.

"You won't write this part, will you?" the voiceover says. "I wouldn't ever take my top—I just really really wanted to live, I mean . . . "

The slasher, like he's scared of her breasts, takes a stumbling step back.

It leaves him just right at the edge of the cliff.

"And then I remembered my Sunday school," the voiceover says, and we're right there with her that night, her on her knees, topless but somehow not showing any skin, and what she's doing, it's some

David and Goliath action: using her bikini top as a sling, a grapefruit

of a rock going around and around.

"I guess I'm lucky I'm a C cup," the voiceover says just as the girl

It slams into Billie Jean's lower face, just crushing it but the voiceover interrupts: "That's how it was supposed to go, I mean."