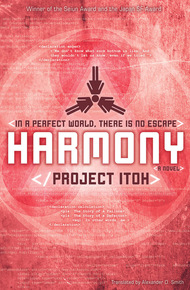 In the future, Utopia has finally been achieved thanks to medical nanotechnology and a powerful ethic of social welfare and mutual consideration. This perfect world isn't that perfect though, and three young girls stand up to totalitarian kindness and super-medicine by attempting suicide via starvation. It doesn't work, but one of the girls—Tuan Kirie—grows up to be a member of the World Health Organization. As a crisis threatens the harmony of the new world, Tuan rediscovers another member of her suicide pact, and together they must help save the planet...from itself.

"I'm not sure when they'll play this, so let me wish you a good morning, a good day, and a good evening."

It was a female voice, heavily modulated.

There was no picture. Only the words VOICE ONLY in the middle of the screen.

I closed my eyes. Maybe that way I could hear a kernel of the real person—which could very well have been Miach Mihie. Besides, if there were no picture, what was the point of looking at it?

A lot of people have died.

A lot of people ended their own lives all at the same time.

I'm sure it was shocking.

I'm sure you're frightened at the possibility of seeing someone die before your eyes.

Our methods are, at present, a secret.

However, the framework for the method is already inside you, inside each of your brains.

It's too late to take it out now.

You are all our hostages.

I tried to listen through the warbling blips of whatever masking process had been applied to the voice for a trace of Miach Mihie and was unsuccessful.

You already know what we are capable of.

You're frightened. You're angry. You are experiencing many emotions.

These emotions are real. Treasure them.

Our society has been engineered to suppress your emotions.

You are being crushed beneath words of kindness.

This is not written anywhere. It is not the law.

No one can say what's really on their mind. Since we were children, we have been told that we are vital resources to our society. Our bodies do not belong to us, they belong to society at large. They are public property.

Haven't you had enough of it?

I am sure you have all heard about the rise in the suicide rate. You're not the only one who wants to escape.

The message was a familiar one.

Miach's words to me and Cian echoed in my head.

Words that had given a clear shape to our suffering.

We are going to create a new world.

In order to do that, we need to know who is capable of making change.

Within the next week, I want you each to kill at least one other person.

I don't care what means you have to use.

I want you to prove that you're capable of doing anything to serve your own ends. Prove that other people don't matter.

Accept the fact that your life is the most important. Revel in it.

Those who are unable or unwilling to perform this small task will die.

You know we can follow through with this threat. You have seen what we can do.

If you should hesitate to take someone else's life, even if it means saving yourself, then we will kill you without mercy.

That is, you will kill yourself.

We can do this with the press of a button.

For those who do not yet believe us, we will show you proof.

You will be able to see it for only a moment.

"That is all the voice data we have received at Network 24." The screen switched back to Edison Carter. He was reading from an AR script again. "We traced the origin of the message, however. The person or people who sent it used the ID of one of the recent mass suicide victims." At that point, the star reporter of Network 24 casually reached into his shirt pocket, pulled out a pen, and slammed it into his right eye.