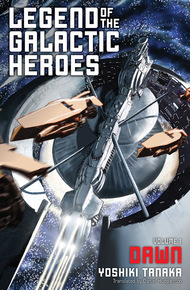 Yoshiki Tanaka was born in 1952 in Kumamoto Prefecture and completed a doctorate in literature at Gakushuin University. Tanaka won the Gen'eijo (a mystery magazine) New Writer Award with his debut story "Midori no Sogen ni…" (On the Green Field…) in 1978, and then started his career as a science fiction and fantasy writer. Legend of the Galactic Heroes, Volume 1: Dawn, which translates the European wars of the nineteenth century to an interstellar setting, won the Seiun Award for best science fiction novel in 1987. Tanaka's other works include the fantasy series The Heroic Legend of Arslan and many other science fiction, fantasy, historical, and mystery novels and stories.

Legend of the Galactic Heroes Vol. 1: Dawn by Yoshiki Tanaka

The "golden brat" Reinhard von Lohengramm, a military prodigy and admiral of the Galactic Empire, has ambitions beyond protecting the borders or even defeating the empire's enemies. He seeks to overthrow the old order and become a truly absolute—yet benevolent—dictator. His rival, the humble Yang Wen-li of the Free Planets Alliance, wishes to preserve democracy even if he must sacrifice his political ideals to defeat the empire. Their political and military battles play out over a galactic chessboard in an epic saga fifteen centuries in the making!

At that moment, the Second and Sixth Fleets of the Alliance were reeling from shock, having only just learned of the sudden change of circumstances. Even so, they had not decided to veer from the original plan and were still advancing toward the battlefield at the same velocity as before.

Vice Admiral Paetta, commander of the Second Fleet, was sitting in the command chair of the flagship Patroklos, jiggling one knee outside the crew's line of sight. Irritation and impatience kept it rocking nonstop. The fleet commander's psychological state was reflected in his subordinates, and the air on the bridge felt charged with electricity. Amid all that, the vice admiral noticed one man, and one man only, who didn't look especially bothered. After the slightest of hesitations, he called out his name: "Commodore Yang!"

"How do things look to you? Your opinion, please."

Yang, having risen from his station chair, removed his beret again and lightly scratched through his black hair with one hand. "The enemy is probably trying to destroy our forces individually before we can rendezvous. Since the Fourth Fleet is numerically smallest, it's only natural they'd try to get rid of them first. The ball's in their court as far as which target is most pressing, and they're making the most of the initiative."

"Do you think the Fourth Fleet can hold out?"

"Both forces have clashed head-on. Which means the advantage lies with the side outnumbering its opponent, and moreover, with the side that strikes the initial blow."

Yang's expression and tone of voice seemed indifferent. As Vice Admiral Paetta observed him, he kept opening his fist and then squeezing it shut, trying to exorcise his annoyance.

"In any case, we need to get to the battlefield ASAP to reinforce the Fourth Fleet. With any luck, we should be able to strike the enemy from behind. If we do that, we can turn the tide in one fell swoop."

Yang sounded unconcerned as ever, which almost made Paetta let his words pass by unacknowledged. The vice admiral had started to turn his head back toward the screen, but he stopped and looked again at the young staff officer.

"What makes you say so?"

"The fighting will already be over by the time we get there. The enemy will leave the battlefield, and before the Second and Sixth Fleets can rendezvous, they'll circle around to the rear of one or the other and launch an attack there. Since the Sixth Fleet is the smaller of the two, it's almost certain they'll be the ones targeted. The empire's taken the initiative, and at present they've still got it. I don't think we need to keep doing what they expect any further."

"Well then, what do you propose?"

"That we change tactics. Instead of rendezvousing with the Sixth Fleet in that battlespace, we go rendezvous with them now—without a moment to spare—and prepare a new battlespace in that sector. If we combine the fleets, we'll have twenty-eight thousand vessels, and after that we can challenge them with better than fifty-fifty odds of victory."

". . . Meaning, you want me to just look the other way as the Fourth Fleet is massacred?"

A note of deliberate reproach was apparent in the vice admiral's tone. That is one cold-blooded thing to say, he was thinking.

"Even if we left right now, we wouldn't get there in time."

Yang's tone was curt, whether he knew what was going on in the vice admiral's head or not.

"But I won't abandon a friendly force."

At the vice admiral's words, Yang shrugged his shoulders lightly. "Then ultimately, their tactic of attacking each group separately will make easy prey of all three fleets."

"Not necessarily. The Fourth Fleet won't go down without a good fight. If they can keep holding out . . ."

"I just told you it was hopeless, but—"

"Commodore Yang, reality is made up of more than just cold-blooded calculation. The enemy commander is Count von Lohengramm. He's young and inexperienced. But Vice Admiral Pastolle is a seasoned warrior forged in countless battles. Compared to that—"

"Commander, he's inexperienced as you say, but his tactical planning—"

"Enough, Commodore." The vice admiral cut him off, displeased. He couldn't hold back his disgust for this young staff officer who just wouldn't give him the answer he wanted.

The vice admiral motioned for Yang to sit back down and turned his head back toward the screen.

Four hours had passed since the start of battle. By this point, the Fourth Fleet of the Alliance Navy could hardly be called a fleet at all. There was no tidy, well-organized battle formation. No unified chain of command. It was nothing more than scattered pockets of desperate resistance: isolated, cut off, single ships in every quarter waging a losing battle.

The flagship Leonidas was now a colossal hunk of metal wandering in the void. Within, there was nothing left that lived. The body of Commander Pastolle had been sucked out into the vacuum by the air-pressure differential in the instant that concentrated enemy fire had opened up a large crack in the bridge's hull. What condition his corpse was in and where in space it was drifting, nobody knew.