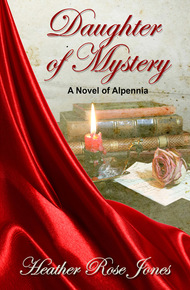 In a country town in the Principality of Alpennia, in the wake of the Napoleonic wars, Margerit Sovitre is on the brink of resigning herself to the fate of an orphan of only moderate means—marriage to the first respectable man who offers. Her expectations change abruptly when her wealthy and eccentric godfather, Baron Saveze, leaves her a fortune...and a bodyguard of mysterious origins known only as Barbara. Margerit's relations see only a more ambitious marriage, but for Margerit, her new wealth means a chance to study at the university, where she begins to unlock the meaning behind her mystic visions.

Thaumaturgy offers a new path to her...and new dangers. The new Baron Saveze wants revenge for the loss of his expected inheritance. Politics around the royal succession create traps for the unwary, and the line between thaumaturgy and sorcery can depend on which side prevails.

At every turn, Barbara stands between Margerit and every danger, whether physical or political, as service turns to friendship, and to something deeper and more hazardous. But Barbara has her own mysteries to solve, and the answer could plunge them both into further peril or be their salvation.

I have a weakness for Graustarkian novels, and Jones's Alpennia is a worthy neighbor to Ruritania and its kind, a complex middle European kingdom so perfectly described that you can feel a thousand years of history and custom behind each detail. The story of Margerit, unexpected inheritor of her godfather's fortune and of Barbara, his duelist-bodyguard, unfolds as neatly as a minuet, while the magic, based on the miracles of the saints, is an astonishing invention, unlike anything I've seen elsewhere. – Melissa Scott

Baron Saveze nodded almost imperceptibly to the waiting footman who removed a silver cover from the dish of chapon à la Provençale and slipped it deftly onto the table before him. He prodded the capon delicately with his fork, sliced off a morsel then paused with the fork halfway to his mouth to announce, "We shall be going out this evening."

If the baron were less rich or less powerful, he would have been called an Eccentric, but Alpennian society didn't use that word of a man like the baron. As he was the only person sitting to dinner, and as it was neither one of his eccentricities to explain his plans to the lower servants nor to presume such exalted rank as to speak in the royal plural, the target of this remark appeared to be the motionless figure standing precisely one step behind and to the right of his chair.

The baron turned his head the smallest fraction that would enable him to catch any reaction as he continued, "We shall be going to a ball."

His auditor gratified him with a startled shift in stance.

Another dinner guest—had there been another dinner guest—would have been able to place that figure's position in the household with some certainty, up to a point. That the coat and breeches were in the archaic mode indicated a position in the household staff. That they were of costly fabric spoke of valued talents. That a narrow-bladed sword hung at the waist—even here at a simple homely dinner—gave the profession as armin, a formal bodyguard, indeed as a duelist. That the body wearing those clothes and that sword was slim and muscular argued a seriousness to the position that went beyond the longstanding fashion in Rotenek for armed shadows. And that this slim, muscular body was also curved was…unexpected. But that was one of the baron's eccentricities.