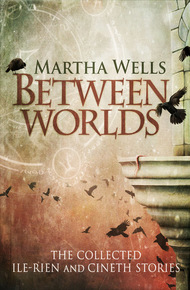 Martha Wells has written many fantasy novels, including The Wizard Hunters, Wheel of the Infinite, the Books of the Raksura series (beginning with The Cloud Roads), and the nebula-nominated The Death of the Necromancer, as well as YA fantasies, short stories, and non-fiction. She has had stories in Black Gate, Realms of Fantasy, Stargate Magazine, Lightspeed Magazine, and in the anthologies Elemental, Tales of the Emerald Serpent, The Other Half of the Sky, The Gods of Lovecraft, and Mech: Age of Steel. She has also written the media-tie-ins, Stargate Atlantis: Reliquary, Stargate Atlantis: Entanglement, and Star Wars: Razor's Edge. Her new book in the Books of the Raksura series, The Edge of Worlds, was released in April 2016 by Night Shade Books, and the sequel, The Harbors of the Sun, will follow in 2017.

Between Worlds by Martha Wells

Originally published as part of Six by Six: A New Kind of Spec-Fic Anthology. Contains all five previously published short stories set in Ile-Rien and Cineth, plus a new story, "Night at the Opera," set before The Death of the Necromancer and featuring Reynard Morane and Nicholas Valiarde.

Wells' collection of short stories from Ile-Rien and the related world of Cineth is a delight even if you haven't read the associated novels — though of course Death of the Necromancer is also part of this Storybundle! Two stories from Ile-Rien's past grant new glimpses of both the deadly Fey and of Nicholas Vailliarde, and a matching set from Cineth open a window into a world reminiscent of the ancient Mediterranean, where magic is perilous and a god may reside in the roots of an olive tree. Wells' characters are as compelling as her world-building, making this a collection to be savored. – Melissa Scott

Reynard Morane was at his usual table in the Cafe Baudy, a somewhat risqué establishment built on a barge in the Deval Forest pleasure garden's lake, when a beautiful man approached his table. This wasn't an unusual occurrence, especially in this cafe, but this beautiful man was a stranger. He said, "Captain Morane?"

From his features and dark skin, the man was Parscian, a little younger than Reynard but not by much, tall and well-built, and dressed in an elegant but understated way which suggested some level of the upper class. The coat was too expensive for the man to be from a university. For some reason, Reynard attracted a high percentage of men of academic persuasions. "Yes." Reynard smiled warmly. "Please join me."

The man hesitated, then drew out the opposite chair. "A friend told me about you."

"And which friend is this?" Reynard caught the waiter's attention and lifted his brows. The waiter sized up the situation professionally, then went to the bar for a fresh bottle of wine and glasses.

"A man named Biendare." The man lowered his voice. "I believe he is known in some circles as 'Binny.'"

"Binny?" Reynard frowned. This was not encouraging. Binny was not someone who would have recommended Reynard for an assignation. At least not the kind of assignation Reynard had hoped for. Just to make certain, he said, "At the roasted nut kiosk on the Street of Flowers?"

"No, it was in March Street, at a wine bar that also sells fried fish."

"Right." Reynard sat up, adjusting his attitude from invitingly indolent to business-like and alert.

The waiter arrived at the table with the bottle and glasses. Reynard sighed and told him, "No."

"No?" The waiter looked startled, then disappointed. "Oh. Coffee, perhaps?"

The man cast a puzzled look at the retreating waiter's back, and Reynard admitted, "I was hoping it was an assignation." He waved a hand. "It's the Cafe Baudy, you know. There are often assignations."

"Oh, yes, I..." The man obviously decided to drop that subject and pursue his objective. "My name is Amadel. I am the confidential secretary for the Lady Shankir-Clare. She needs assistance of a...particular sort."

Reynard held up a hand for silence as the waiter approached. He waited until the coffee service had been arranged and the waiter departed, then said, "She's being troubled by someone but feels unable to confide the details to the Prefecture?"

"Yes, exactly." Amadel added cream to his cup with the relief of a man who had been searching everywhere for help and was finally in the right place.

This was odd. The Shankir-Clares were a family of rather famous diplomats, wealthy and well-respected in both Parscia and Ile-Rien, where the different branches of the family had originated. Reynard had never met any of them because they were the sort of people who were invited to the palace, not the sort who traveled in demi monde circles. No wonder Amadel hadn't been familiar with the Cafe Baudy. "How did you ever run across Binny?"

"Lady Shankir-Clare's hairdresser knew him," Amadel said. "She said he was the best way to contact people who could help with...sensitive problems."

"Is it blackmail?" Reynard asked. If one of the Shankir-Clare ladies had trusted her affections to the wrong man, and it wasn't someone associated with the infamous Count Montesq, Reynard could probably have it taken care of before dinner. "I quite like dealing with blackmailers. I have some experience at it."

"It isn't an ordinary blackmailer. It's a sorcerer." Amadel's brow furrowed as if he was trying to control a wince of anticipation. He thought Reynard would refuse the commission now. Most of the people who did this sort of thing wouldn't tangle with a sorcerer.

Reynard smiled. "Then Binny sent you to the right place." He signaled the waiter to bring the bill.