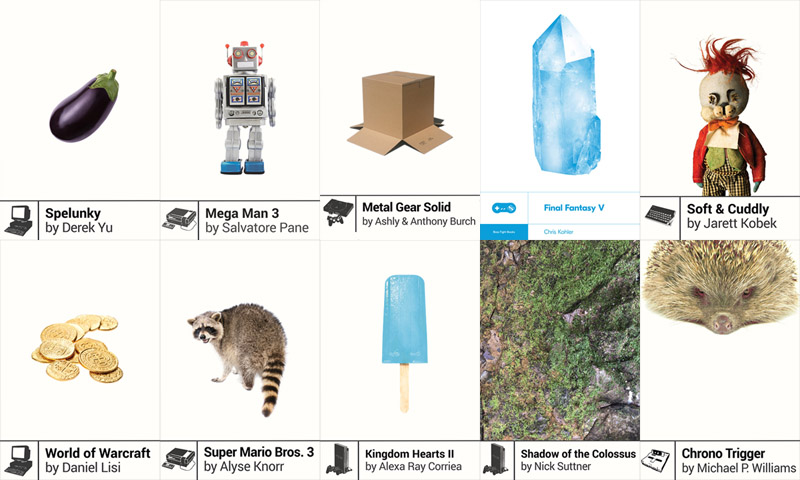 As summer approaches, it's so important to keep your brain from melting in the heat or atrophying in the Netflix binges. That means its time to queue up your phones & tablets & laptops with some ice cold ebooks. Well, folks, we've got you covered with ebooks that are both fun and learny. Learny? Learny.

Since debuting our first book in December 2013, I've been heartened to see just how many people have been hungry for the same thing I was. In a GameSpot article about our press, Maxwell McGee wrote, "Great games, whether they're AAA blockbusters that reached millions of people or fan-made efforts that touched only one person, deserve this sort of recognition. They deserve not to be forgotten or overlooked in the endless stream of new releases."

We're not here to deliver the vast sweeping industry histories readers have already read, but to tell many smaller stories about the people who make games and the people who play them, about how we received games as kids and how they hold up as adults, about what happens when we take the critical tools that have for so long been applied to books, music, and film, and to apply those tools to a younger, hungrier art form.

And right now we're teaming up with StoryBundle for a massive bundle all-Boss Fight Books StoryBundle. We're offering TEN ebooks for just $15. That's 70% off our usual ebook price, and well under the cost of a single paperback. If you've been considering checking these books out or are finding out about us for the first time, now is the perfect time to jump aboard. This collection may never be this cheap again.

This collection is focusing on our seven most recent titles, none of which appeared in our first all-Boss Fight bundle: Spelunky by Derek Yu, World of Warcraft by Daniel Lisi, Super Mario Bros. 3 by Alyse Knorr, Mega Man 3 by Salvatore Pane, Soft & Cuddly by Jarett Kobek, Kingdom Hearts II by Alexa Ray Corriea, and Final Fantasy V by Chris Kohler. Additionally, the bundle contains three of our top-selling older books: Chrono Trigger by Michael P. Williams, Metal Gear Solid by Ashly and Anthony Burch, and Shadow of the Colossus by Nick Suttner.

As an added bonus, when you buy our StoryBundle, you'll receive an exclusive discount code to get 10% off anything from bossfightbooks.com while the StoryBundle is running. So if you want paperback versions of some or all of these books, you'll be saving some cash.

This bundle is only available through June 21, so the time to jump on this offer is right now. Thanks so much for picking up this bundle, sharing it with your friends, and supporting Boss Fight Books. With your help, we'd love to keep making great books about classic video games long into the future.

The initial titles in the The 2018 Boss Fight Bundle (minimum $5 to purchase) are: