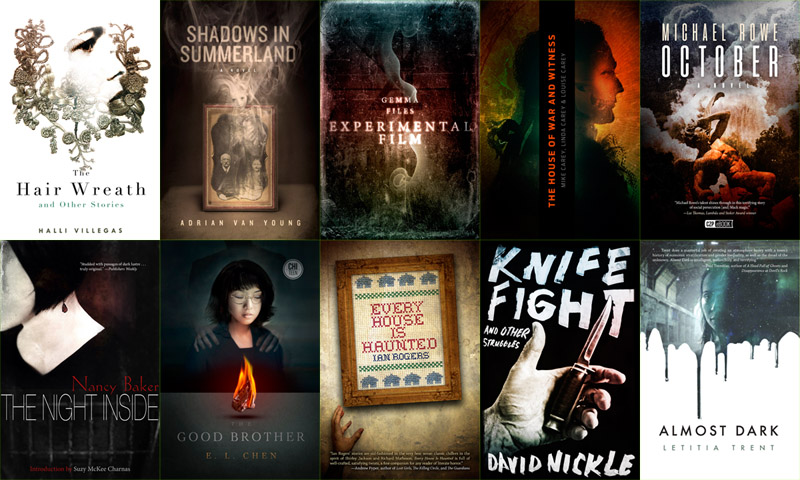 My fellow droogies, it's time again for the High Holy Days of Halloween! Come, take my skeletal hand. . . . Here at ChiZine Publications, the home of dark fiction, we're vigorously harvesting our pumpkin patch, grooming our black cats and giving the ghosts a wash and iron. We're wafting through the house in flowing black frocks and collapsing mournfully onto the chaise longue to sip absinthe while bats fan us with their wings. You know, in between reading manuscripts . . . and curating a new book bundle for StoryBundle.

We've found you a collection of ten amazing novels and story collections—horror, dark fantasy and weird tales—by popular and bestselling ChiZine Publications authors. As always, at StoryBundle, you name your own price—whatever you feel the books are worth.

The Halloween Horrors bundle has tales to move you, terrify you, keep you up at night and make you ponder the very nature of your existence.

In The House of War and Witness by Mike Carey, Linda Carey & Louise Carey, the whole of Europe is balanced on the brink of war. An Austrian regiment is sent to the farthest frontier of the empire to hold the border against the might of Prussia. Their garrison, the ancient house called Pokoj. But Pokoj is already inhabited, by a company of ghosts from every age of the house's history. Only Drozde, the quartermaster's mistress, can see them, and terrifyingly they welcome her as a friend. As these ageless phantoms tell their stories Drozde gets chilling glimpses not just of Pokoj's past but of a looming menace in its future. A gorgeous novel from the husband-wife-daughter team of the Careys. (You might know Mike as M.R. Carey, author of the bestselling The Girl with All the Gifts.)

Tori Wong is starting over. She's given herself a new name, dropped out of university to work at a downtown Toronto bookstore, and fled her parents' strict home to do all the things she's never done before. As she tries to escape her traditional Chinese upbringing and navigate young adulthood and first love, she's also haunted—by her dead brother during the Festival of Hungry Ghosts. But neither the past nor the present are quite as they appear, in E.L Chen's The Good Brother.

The Shirley Jackson and Sunburst Award-winning Experimental Film by Gemma Files takes you on a journey of discovery and fear as the malign influence of a very old film begins to permeate every aspect of film teacher Lois Cairns' life. As she struggles with her son's autism diagnosis, a terrifying being tries to rip its way into our world, and reality starts to unravel. An existential nightmare made physical, projected off the screen and into real life.

Spirit photographers, clairvoyants, ghosts real and imagined, religious fanatics and rogues abound in Shadows in Summerland by Adrian Van Young. A soaring and resplendently Gothic novel spanning three decades, as much an homage to the Golden Age ghost stories of Edith Wharton and Henry James as it is a companion to the revisionist historical epics of Peter Carey and Sarah Waters, with a little steampunk all its own.

These aren't your ordinary vampires. (They don't sparkle either, thank goodness.) Grad student Ardeth Alexander finds herself trapped in a nightmare as the unwilling blood source for a captive vampire. When she discovers that her fellow prisoner is not the worst monster she faces, she realizes that the only way to survive is to make an irrevocable choice in The Night Inside by Nancy Baker (with a new introduction by Suzy McKee Charnas).

A young woman out of time seeks her old lover in the cold spaces between the stars. The fleeing worshippers of an ancient and jealous deity seek solace in an unsuspecting New World congregation. In a suburban nursery, a demon with a grudge and a lonely exorcist face off for what could be the last time. In Knife Fight and Other Struggles, David Nickle follows his award-winning debut collection Monstrous Affections with a new set of dark tales that span space, time and genre. With an introduction by Hugo Award-winning author Peter Watts.

In Every House Is Haunted (winner of the ReLit Award), Ian Rogers explores the border-places between our world and the dark reaches of the supernatural. He draws together the disturbing and the diverting in twenty-two showcase stories that will guide you through terrain at once familiar and startlingly fresh. Includes the Shirley Jackson Award-nominated "The House on Ashley Avenue." Introduction by Paul Tremblay.

October by Michael Rowe takes us to the waning years of the 1990s, to an isolated rural town called Auburn, which could be anywhere at all—a town where everyone knows everyone else—where dark secrets run through its veins like blood. Where everyone knows that sixteen-year old Mikey Childress is "different." But even the townsfolk aren't ready for the night he makes a pact with dark forces older than time to visit a terrible vengeance on his enemies. A delicious story ready-made for the season!

Dead siblings, haunted factories and small-town librarians. Almost Dark by Letitia Trent reads like the secret teratoma or vestigial twin of Andrew Pyper's The Damned. Claire carries a secret: she is wracked with guilt over her twin brother Sam's accidental death. The past bleeds into the present when an aggressive business developer announces the renovation of Farmington's oldest textile factory, the scene of Sam's death—and many other mysterious accidents throughout its long and terrible history.

Winner of the prestigious Exile/Carter V. Cooper Prize for fiction, author Halli Villegas guides us into a wreath of memories, rife with an atmospheric and ominous creep redolent of Shirley Jackson. Girls and boys disappear; couples caught in the heat and suppressed rage of urban life are haunted by the ghosts of their own making; neighbourhoods drift in the murky atmosphere of buried emotions. The Hair Wreath and Other Stories illustrates the disconnect between people and the places they inhabit, the gap that allows the supernatural to flourish. – Sandra Kasturi

The Halloween Horrors bundle runs for 3 weeks only. It's a tremendous, creepy little deal, and a great way to pick up a batch of books to keep you warm . . . or maybe chill your bones. Live deliciously, my fellow travellers in this lonesome October—you can't go more frightfully, wonderfully, spookily wrong!

If you pay at least the bonus price of just $15, you get all four of the regular books, plus SIX more!

This bundle is available only for a limited time via http://www.storybundle.com. It allows easy reading on computers, smartphones, and tablets as well as Kindle and other ereaders via file transfer, email, and other methods. You get multiple DRM-free formats (.epub, .mobi AND .pdf) for all books!