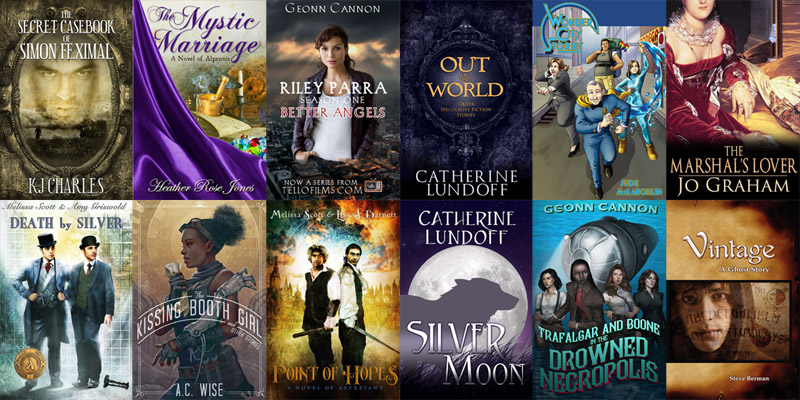 A couple of years ago, Steve Berman at Lethe Press asked me to co-edit Lethe's annual year's best lesbian SF/F anthology, Heiresses of Russ. I was, of course, honored to be asked, but I was even more delighted by the number and quality of the stories submitted. When I started writing SF/F, including queer characters and themes was, I was told, an active bar to getting published, and was, at best, likely to get you branded as just and only a queer writer, trapped forever in a ghetto within a ghetto. I knew that there had been a resurgence of queer spec fic in the 80s and 90s - I'd been part of it - but I hadn't realized how lasting that change had been. Reading for Heiresses of Russ introduced me to dozens of new stories and writers for whom intelligent, sensitive, nuanced writing about lesbians was simply a normal part of their range. When I proposed an LGBT+ StoryBundle to celebrate Pride, I knew I was going to run into the same abundance, but I had no idea just how abundant the field was going to be. I realized immediately that there was going to be no easy way to winnow the field to a dozen books.

To get there, I've made some arbitrary decisions. First, no novels in which being queer means you're evil, nor any in which it's a doomed and tragic fate. There are places for the latter, but this is June and Pride Month, and I want to share books that celebrate queerness. I've also decided to focus on small press offerings, as they are more likely to be overlooked than books from the mainstream houses. I've tried to pick newer novels, and to reintroduce some older writers, and in general to include books and writers who you might not have seen yet. Unfortunately, this didn't narrow things down very much at all. In the end, I went with books I loved, books that showed me new facets of the LGBT+ experience, books that made me feel proud of being queer and an SF/F fan. This is an admittedly eclectic group — you'll find historical fantasy, contemporary werewolves, superhero adventures, Victorian adventure, a YA ghost story, secondary world fantasies, a noir-inflected war between Heaven and Hell, and a couple of short story collections that individually span just as wide a range — but they are all written by authors at the top of their game. Six Spectrum and Lambda Literary Award finalists and winners are included in the group, and Riley Parra has been turned into a web series by Tello Films (and will debut in August, soon after our bundle ends!). You'll also find a diverse group of characters, worlds where the rules of sex and gender are profoundly different from our own, and stories that will hold you entranced until the very last word.

I don't claim that this is the (or even "a") definitive LGBT+ collection. The field is far too large now for anyone to claim that. What I can promise is that this is a celebration of queerness, a range of stories — gay, lesbian, bi, trans, and just plain queer — that shows off some of the best writers working today.

StoryBundle has always allowed its patrons to donate part of their payment to a related charity, and the appalling situation in Chechnya seemed to be one where donations could make a real and immediate difference. If you choose, you can donate part of the bundle's price to the Rainbow Railroad, a group helping LGBT people escape persecution and violence worldwide. At the moment, they are concentrating on helping the victims of the attacks on gay men in Chechnya; your donation will be a potentially life-saving gift. – Melissa Scott

The initial titles in the LGBT+ Bundle (minimum $5 to purchase) are:

If you pay more than the bonus price of just $15, you get all five of the regular titles, plus seven more!