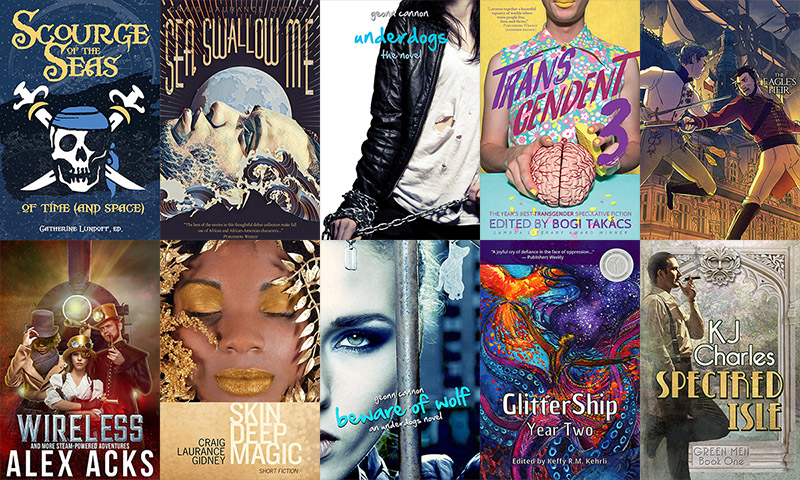 Two years ago, I asked the folks at StoryBundle if I could do a queer fantasy bundle to celebrate Pride. The next year, I asked if I could do it again, only with science fiction, and both times they were happy to oblige. This year, I'm back with yet another queer-themed bundle to celebrate Pride month. I'm focussing on fantasy again this year, and, as in both previous years, there has been an embarrassment of riches. Some of my favorite authors have new work, and I found a bunch more who were new to me, and whose work is intelligent, sensitive, nuanced, and queer. As always, there was no easy way to winnow things down.

So I've made some arbitrary decisions. The first one was the easiest: no stories in which being queer means you're evil, and none in which it's a doomed and tragic fate. There are places for the latter, but this is June and Pride Month, and I want to share books that celebrate queerness. I've also decided to focus on small press offerings, as they're more likely to be overlooked than books from the mainstream houses. I've also chosen several anthologies, on the theory that they offer extra bang for your buck: they all contain multiple writers, many of whom were new to me, and thus extra chances for you to find new favorites, and I've included some single-author collections. After all, not every writer worth reading works at novel length. I've also included a work of interactive fiction, The Eagle's Heir, from Choice of Games, which offers a fascinating way to explore sexuality and gender disguised as a high-flying steampunk adventure.

This is admittedly an extremely eclectic group. You'll find short stories and novels (and, as I mentioned, a game); you'll find contemporary werewolves and steampunk, dark Edwardian fantasy and stories that draw on myths ancient and modern, a "year's best collection," a year's worth of Glittership, and a wildly diverse collection of pirates. What they have in common is queer visions, visions that celebrate our multitudes, all written by authors at the very top of their game. You'll find diverse characters, an equally diverse range of styles, and stories that will hold you entranced until the very last word.

I don't claim this is the (or even "a") definitive LGBT+ collection. We've come too far, and the field is far too large, for anyone to claim that. What I can promise is that this is a celebration of queerness, a range of stories that shows off some of the best writers working fantasy today.

StoryBundle has always allowed its patrons to donate part of their payment to a related charity, and once again, we're supporting the Rainbow Railroad, a group helping LGBT people escape persecution and violence worldwide. If you choose, you can donate part of the bundle's price to them. They are currently concentrating on helping the victims of the attacks on gay men in Chechnya; your donation will be a potentially life-saving gift. – Melissa Scott

If you pay at least the bonus price of just $15, you get all four of the regular books, plus SIX more!