THE SFWA SCOUNDRELS IN SPACE BUNDLE 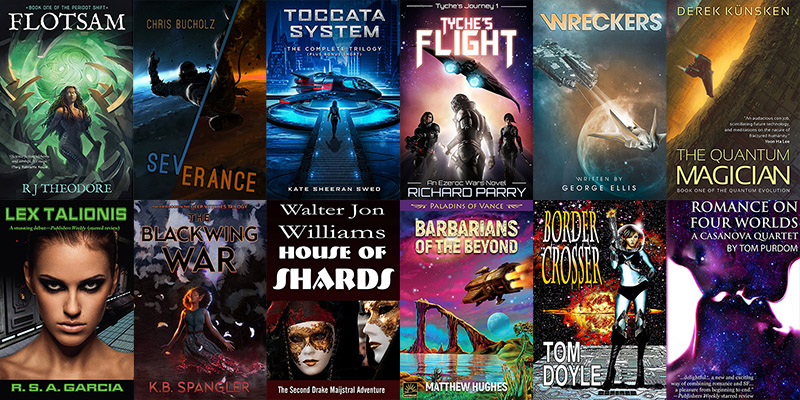 The con artists, thieves, and space pirates of tomorrow fascinate us, all the more because these motley ne'er-do-wells so often end up saving the universe despite their incorrigibility. Pick up the SFWA Scoundrels in Space StoryBundle and get to know twelve such spacefarers who live on the fringes of a dozen wildly different worlds, until circumstances force each of them into hard choices and more adventure than they expected.

SFWA is a nonprofit organization dedicated to promoting, advancing, and supporting science fiction and fantasy writing in the United States and elsewhere. This year the SFWA Independent Authors Committee had the pleasure of sorting through a hundred excellent books as we narrowed our selection down to these twelve special stories.

Meet some of our favorite scoundrels:

• The Quantum Magician – Derek Künsken's fascinating novel about a genetically engineered man so intelligent and curious that he turns to theft to entertain his insatiable mind, until one deception forces him to face his true potential.

• The Blackwing War – K.B. Spangler's wonderful new release about a deeply different alien life-form, a human witch adept at communicating with this mysterious being, and the trouble they cause once they discover the secrets behind an interstellar war.

• House of Shards – Walter Jon Williams's droll tale of the adventures of two master thieves, an obsessed cop, an asteroid resort catering to the rich, and a fabulous jewel that captures the light of a dying sun.

• Barbarians of the Beyond – Matthew Hughes's entertaining story of derring-do set in the Jack Vance Universe, in which a tough young woman returns to the world of her captivity to steal a treasure to buy her parents' freedom.

If you pay at least the bonus price of just $20, you get all four of the regular books, plus EIGHT more books, for a total of 12!