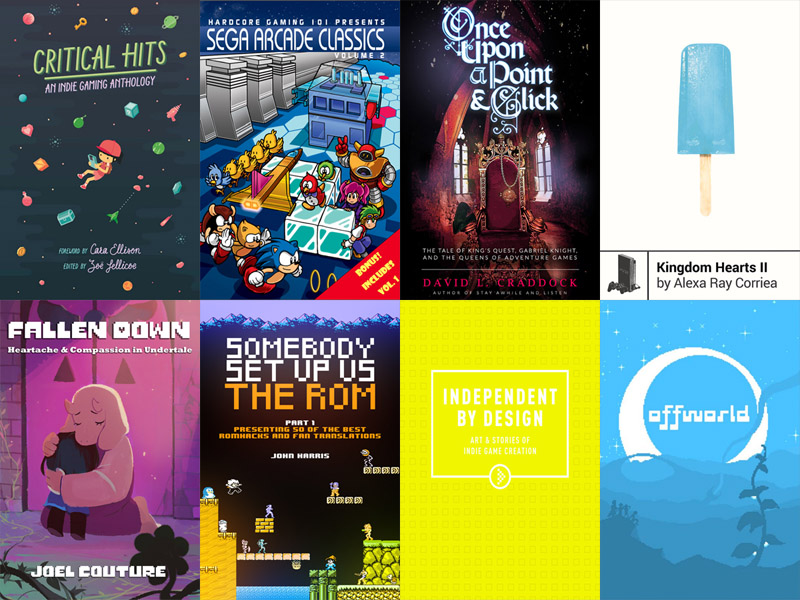 Picture, if you will, a secret bookshelf. Three times a year, behind a special oak panel, it's refreshed with a ton of fascinating books about video games, as if by magic. Those books span gamuts, from fascinating anthologies to wonderful cultural histories, all the way to single-book drill downs on some of the best video games in history. But how - you may ask - would you get access to this wonderful magic bookshelf?

Well, it turns out that if you just log on to the Internet and go to the StoryBundle website, these so-called 'Video Game StoryBundles' run thrice in a calendar year, and the latest one, available at a 'pay what you want' prices and including exclusive tomes on Undertale & ROM hacking, & the first-ever eBook version of the acclaimed Indie By Design interview/profile book, is available... when? When? Right now, good Sir!

We're also digging on Sega Arcade Classics: Vol. 2 from Kurt Kalata & friends, a wonderful continuation of the arcade history of one of the greatest video game creators of all time, from obvious classics like Choplifter & Zaxxon to obscure gems like Dark Edge & Super Locomotive. As a bonus, you'll also get the Sega Arcade Classics Vol.1 ebook bundled in for free.

Another choice book in this bundle - Once Upon A Point & Click by David L. Craddock - looks at the careers of Roberta Williams & Jane Jensen, two of the key movers and shakers in the history of the adventure game - who also happen to be leading women in an often male-dominated industry.

The higher-tier rewards - available at the payment tier of $15 or your local equivalent - is headed by the StoryBundle exclusive Fallen Down: Heartache & Compassion in Undertale by Joel Couture, an intelligent analysis of Undertale's soft underbelly with a cover from longtime Undertale contributor Temmie Chang & even a very brief clarifying quote or two from Toby Fox himself.

And we're stoked to debut Somebody Set Us Up The ROM, Part One - another StoryBundle-exclusive ebook from John Harris, featuring wonderfully detailed analysis on some of the most impressive ROM hacks - changing levels, characters, and entire game modes - out there on the Internet.

Plus we've nabbed The Offworld Collection - edited by Laura Hudson & Leigh Alexander, featuring a complex, smart & progressive set of new voices taking us through alternative visions for the future - or indeed the present - of video games, as well as Boss Fight Books - Kingdom Hearts II from Alexa Ray Correia. This endearing blend of personal story & game history often inherent in the Boss Fight Books series actually manages to make the famously complex lore of Kingdom Hearts (somewhat!) understandable, while also talking about what the series meant to Alexa while growing up. (And if you're interested in more Boss Fight Books, check out their Season 4 Kickstarter!)

Once again, the optional charity for this bundle is the Video Game History Foundation, a brand new non-profit organization dedicated to cataloging, digitizing, and preserving the history of video games.

The initial titles in the The Summer Smash Game Bundle (minimum $5 to purchase) are:

If you pay more than the bonus price of just $15, you get all three of the regular titles, plus FIVE more!

This bundle is available only for a limited time via http://www.storybundle.com. It allows easy reading on computers, smartphones, and tablets as well as Kindle and other ereaders via file transfer, email, and other methods. You get multiple DRM-free formats (.epub, .mobi and some .pdf) for all books!