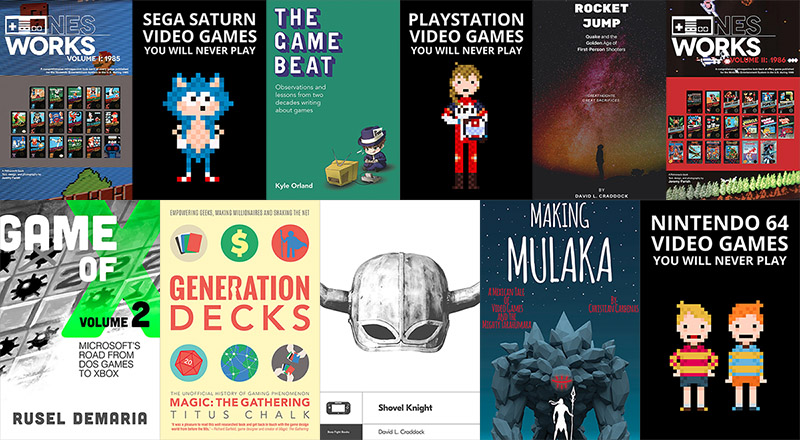 StoryBundle is sending off 2018 with one of our best collections of books about video game history and culture yet: The Winter Power-Up Game Bundle, available now for a limited time on www.storybundle.com.

Fellow historian David L. Craddock returns with Rocket Jump: Quake and the Golden Age of First-Person Shooters, a narrative-style history of the 1990s and the creative and contentious culture that influenced developer id Software. Craddock and Boss Fight Books team up to offer Shovel Knight, which digs into the making of Yacht Club Games' celebrated title and love letter to retro-style platforming.

All that, plus journalist Kyle Orland's collection of some of his most impactful writings on the games industry, a history of CCG (collectible card game) juggernaut Magic: The Gathering, examinations of Sega Saturn, Nintendo 64, and PlayStation One games you've never played, and more. – David L. Craddock

A quick tour of the books in our bundle:

If you've ever tapped a swamp or bought 20-sided dice for any purpose other than rolling stats in Dungeons & Dragons, you need to read Generation Decks. This unofficial history of Magic: The Gathering chronicles the story of the collectible card game that spawned a thousand imitators. Many have come and gone. Magic is still standing, and Generation Decks leaves nothing to the imagination as it explains the "why" and "how" of the global sensation.

Rocket Jump: Quake and the Golden Age of First-Person Shooters

Growing up, Quake was more than a game to me. It was the first virtual arena where I fragged friends over phone lines, the first esports scene I followed, the first time I rocket-jumped to new heights. I sought to recapture that awe and magic in Rocket Jump by interviewing as many developers from id Software—and other influential FPS-game studios—as I could. I hope you enjoy it.

The games I played as a kid—and during high school and college, which also fall under the "kid" demographic—played huge roles in encouraging me to write about games today. The opportunity to interview the principal designers of Shovel Knight to write the Boss Fight Books-published book of the same name was an opportunity to explore the development processes of folks who, like me, carried a torch for the 8-bit games responsible for so many happy memories.

How did Microsoft go from operating systems and word processors to advocates and creators of one of gaming's most powerful consoles and brands? Rusel DeMaria's Game of X v. 2: The Long Road to Xbox does a fantastic job going behind the scenes to show how a command-line interface, a suite of programming tools, and wild parties paved the monolithic software creator's path to console dominance.

Jeremy Parish continues to cement his reputation as one of the go-to historians on Nintendo history. From game design to designer history and each title's impact on popular culture on its genre, NES Works Volume 1: 1985 presents a definitive account of how a Japanese playing-card manufacturer left an indelible mark on the burgeoning electronic entertainment scene.

Nintendo and its NES were just getting warmed up in 1985. As historian and journalist Jeremy Parish proves time and again over the pages of NES Works Volume 2: 1986, the console came into its own during its sophomore year, and Parish's writing overflows with anecdotes and technical details from each NES title released during '86. -David L. Craddock, curator, StoryBundle

The Game Beat: Observations and Lessons from Two Decades Writing About Games

Kyle Orland's The Game Beat is a snapshot of some of the acclaimed journalist's most insightful writings on the games industry collected. Better yet, Orland breaks the fourth wall between reader and writer to share some of what he's gleaned over his impressive career, offering unprecedented access into one of the industry's most important jobs: Chronicling its history.

Developer Lienzo's Mulaka was inspired by the culture of the Tarahumara, and the 3D action-adventure's beautiful graphics inspired Select Start Press author Christian Cardenas to write Making Mulaka, a book as richly detailed as the game on which it's based. Cardenas does a fantastic job exploring the developer's approach to game development, but even more importantly, his writing gets at the heart of the culture at Lienzo, which formed the bedrock of the game's aesthetics and gameplay.

In its never-ending quest to document the world's rarest—and in many instances, weirdest—video games, Unseen64 has entered fond and expensive terrain in Nintendo 64 Games You've Never Played. Collectors and nostalgic players alike will love absorbing all the information, artwork, and details from Nintendo's groundbreaking 64-bit machine.

Between Sony and third-party publishers, hundreds of games were released on the original PlayStation. In PlayStation Games You've Never Played, Unseen64 does a fantastic job sorting through the titles everyone's heard of to shine a spotlight on some of the system's rarely-talked-about finds.

When gamers say "Sega," they're probably talking about the Sega Genesis or Sega Dreamcast, the Sonic creator's final console. The Saturn is an oft-overlooked platform, and Unseen64 does a fantastic job showing why that shouldn't be the case in Sega Saturn Games You've Never Played, which reveals some of the most fascinating titles for Sega's least-known console.

If you pay at least the bonus price of just $15, you get all four of the regular books, plus SEVEN more!