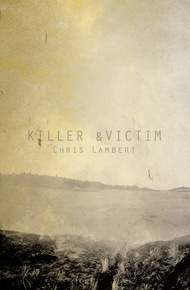 Chris Lambert is the author of Killer &Victim and Killer Unconquered. He is the co-founder of Film Colossus and the head fiction editor of Red Fez Publications. He is also one-half of Watching The Throne, the top Kanye West podcast in the world. He grew up in Canal Fulton, Ohio, then wandered his way to Austin, Texas.

Alexander, the first crowd-sourced city, has come to rival NYC as the premier metropolis in America. It's known as The Paradise City, the first step of a new era. But tonight: A haunting art performance. A killer's quest for redemption. And a photo shoot in a field set aflame. These plant in Alexander seeds of chaos that, when they blossom, will see paradise tearing itself apart.

I halt which means she must halt. She asks me if something is wrong. "Let me give you some advice. When you meet someone famous for what they do, whether it's writing, or baseball, or business, you don't tell them you do the same thing. You keep that to yourself. People who are famous are assaulted, day in and day out, by people who want something from them. It's like surviving in a zombie-infested world. Not that you're zombie. But zombies just want to eat people. They care for nothing else. And celebrities have to deal with something similar where it feels like everyone wants something from you. That they want to use you, devour your resources for their own gain. Day in and day out, everywhere you go. It's exhausting. So maybe you mean well. And are just trying to make small talk but you're nervous. So you latch on to something you think I might be interested in. And that's why you mention that you wrote a script. But to me, to a celebrity, it sounds like a segue to a pitch. Like you're about to pitch me. That you, like every other fucking person, want something from me. Here I was ready to have a nice conversation with a fan, to connect with you as a person. When you ruined it by trying to use me. Even if you weren't trying to use me. What am I supposed to think? How can I still feel good about the interaction? Do you understand?"

And she cries. She cries. How dumb do I feel? Dumb. This poor woman. She has no idea what she's doing. None. She's in the middle age of her life. She's probably failed and failed, or succeeded but only in the most middling ways possible. I'm sure she's experienced happiness, but I'm sure her frustrations burden her, that they strain her marriage. She probably has children. She probably raised them and now that they're older and have lives and her role in their lives has been reduced, she began writing. Her script was probably a personal achievement for her. And here she meets someone she admires. A critic whose name she knows. Maybe her husband doesn't care that she wrote a script. Maybe she hasn't told him or the kids. Maybe I'm the first person she's ever told. Because she trusted me even though we have never met. And I? I'm so jaded that when she makes a common mistake, a mistake I could easily have let slide. . . I shove it down her throat. I should apologize. I should. She could be my mother, couldn't she? And how would I feel then?

"Help!" the mother screams. "Help me!" Survival instincts urge her up the stairs at the fastest pace she can manage. Into her view, over the horizon of the stairs, the box office and large cactus across from the box office. Then the rest of the room: deserted. On the back wall, the large sign that proclaims no phones or bags To the left of it, the door to the theater and Angelica. To the right of it, the doorman's lair. A glare on the box office window hides the inside of the booth.

The mother decides, in that instant, that if she can reach either door everything will be alright. That, even now, things might be okay, as the ticket taker could sound an alarm or maybe even frighten the man chasing her. At the thought of him, a potent merging of fear and disbelief and morbid curiosity. A brief consideration that he may have given up or changed his mind. She looks over her shoulder. Astounded by how close his hands are, at how large they are. Their nails trimmed and rounded, cared for.

A clamp locks onto her ankle. She kicks but strikes nothing. Is, instead, jerked by her ankle with enough vigor her lower body loses contact with the floor. Then her hip. Her ribs. She lifts. She can't grip the carpet, is airborne.

The mother lands on the corners of multiple stairs. Pain detonates in her shin, her thigh, her side, her face. Weight drops upon her back. Driving the air from her. Causing her to bite her tongue. Hands circle her neck and squeeze so she can't cough or breathe. Her face pointed at the floor. She can't taste the blood but her tongue aches and blood streams from the wound, over her teeth, her bottom lip, onto the red carpet. Her nose touches the carpet. Intimate details of the carpet manifest. Fine threads. Dirt grains. Freckle-sized discolorations.

In her ear, heat and breath, one word unremitting:

And there, like discovering an undressed skeleton, the dingy silhouette of a gold-stripped elephant, all of her sensation and thought trumped by the conclusion that the carpet on the stairs is the same as the carpet in the lobby, except the stairs have lost their gold and the lobby has not. Then she sees the wee elephant lift its trunk and sound a note and it shines, and it swells, it shines with a yellow light.