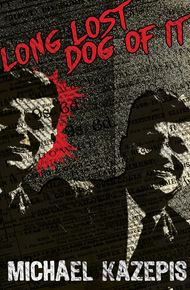 Michael Kazepis is the author of Long Lost Dog Of It and Gravity. His work on the WW2 portrait series, Veterans, alongside photographer Sasha Maslov, was featured in The New Yorker and Vocativ. He is also a reviews contributor for World Literature Today. In 2014, Kazepis launched King Shot Press, a Portland-based micropublisher of radical fiction and ideas. He lives in Oregon.

Long Lost Dog Of It by Michael Kazepis

June 5th, 2011. The streets of Athens are draped in a thick fog of tension. Hundreds of thousands of activists line the streets to protest the bankrupt government's austerity measures. Riot police patrol the crowd and set up barricades across key intersections.

A toothless vagrant scrambles to stay ahead of his past, a young couple struggles to piece their relationship back together, and a killer realizes too late that his number is up. Over the course of 48 hours, they will navigate a labyrinth of sex shows and dive bars, mob fronts and punk shows, fighting both their inner demons and the very real demon stalking the streets with a machine gun in his bag.

A short novel, focused on Athens in 2011, when the whole nation seemed prime to explode under the pressure of austerity and its own lengthy history. There are killers, and casual violence—a stray dog runs off with an ear freshly torn off the head of a racist, a sex show that seemingly ends with a disemboweling—but with prose as lyrical as Goodis. – Nick Mamatas

The vagrant woke in plateia Monastiraki and wasn't sure when or how he'd arrived. His name was Ciprian Varia. He was dressed in salvaged clothes and boots which barely fit. Every part of him hurt.

No clouds had formed in the sky. The flea market was at full hustle, crowded densely with tourists, as strong afternoon sun pounded its boutique-lined streets. An old woman fainted from the heat at the entrance of the market and a space opened around her. Opposite that, the opening to Hadrian's library stood mostly deserted. Almost no one paid attention to Varia, now rising from the sidewalk. He lurched past the gate and tried to shake the pictures out of his head, tried to make sense of dreams or memories that had overlapped and become neither. He suspected his body had ceased to register sleep—he was always exhausted now—and he wanted out, but god had seen otherwise.

Some youths had converged on the platforms which linked the square to odos Ermou, one of the city's main avenues. They smoked and ate pitas. Nearest to the church at the heart of the square, a foreign street performer found himself surrounded—he juggled spheres and took tips, and told stories to an audience that didn't much understand him. Passersby spit over a rail and into the ruins of an aqueduct, where a scavenger below searched for coins in the ancient stream.

Varia smiled dumbly at the day, his front teeth gone. Past his feet, a newspaper fluttered across the ground, headlining coming elections and the Troika. Two men on the metro steps played reggae with acoustic guitars and hocked their homemade records, the area around them littered with trampled cigarette butts and crushed soda cans. Varia exhaled slow and tried to steady himself. The air reeked of mob perspiration, deep-fried car exhaust, an air that felt thick enough to wade through, amplified by the humidity. Vendors hollered prices faster than he could figure and pointed at the mounds of produce stacked high on their carts. Taxicabs singled up at the curb and their fares got in and out, the line moving as if on a conveyor belt. Varia yawned and stretched his arms. He had no idea what time it was, didn't much follow the concept of "time" anymore. He held out a fist to the sky and measured the daylight.

He thought Ah plenty and yawned again and walked down odos Athinas.

He wandered toward Exarcheia, along many closed supply shops, barred windows, some plywood-covered. Stripped bicycles chained to rusted posts, parked cars with flat tires. Some people sleeping on the street. Pigeons crowded sills and statues, shitting everywhere, flocking wherever it seemed there were crumbs. Armored buses parked at odd intersections, carrying riot police, maybe reserves. Some stray dogs chased at traffic. Every transport station along the walk had been demolished by rocks or Molotovs, the sidewalks lined with the melted plastic, broken glass, burnt advertisement posters. The marble façades on odos Akadimias were chipped from crowbars and axes, mined for projectiles in more recent clashes. Some grouped cops in tactical gear patrolled the blocks. The scene looked to him almost like the makings of a civil war, sans the heavy artillery, or maybe it was just an occupation.

Yet the cafés kept busy. Varia bought an espresso in the square and sipped it slow. He found himself able to think more clearly once the caffeine began settling in.

Narrow, unevenly paved alleyways and cobblestone footpaths led him beyond tipped dumpsters and still smoldering garbage piles, marking a trajectory of the previous night's demonstration. Varia lit a cigarette and walked toward the incline.

He found a shaded spot on Lofos Strefi where he sat and watched two cats fuck, and the shadows stretched to expressionistic proportions. Varia counted change until his stomach growled. He felt hungrier than he had ever thought possible. The tomcat clawed into the molly's back and she shrieked against each thrust. Varia inspected his wrists. He couldn't recall ever having been so thin. He pressed a cigarette out on the heel of his boot and flicked it into the dirt. He contemplated the cats and tongued the gap in his teeth. He felt goddamn lobotomized by survival.