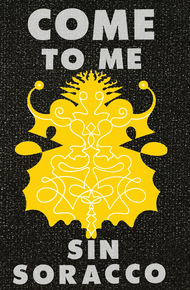 Come to Me by Sin Soracco

Come to Me is a tale of a woman just sprung from prison who finds her way back to a once familiar San Francisco. Gina seeks out her old friend Francine whose rooming house is a refuge for women who are devotees of Santeria, the religion brought to this hemisphere by African slaves. It is above a botanica and curio shop run by Oleander, whose secret past will play a crucial role in this story of love, magic, greed and desire.

Noir is hard-hitting reality, but the occult, or at least occult beliefs are part of reality. In this new book, an ex-con returns to San Francisco (Sin Soracco has a continuing theme) and finds herself involved in Santeria, the Afro-Caribbean religion that can still be found in storefronts in out-of-the-way neighborhoods. She tears the lid off a San Francisco most people will never see. – Nick Mamatas

Magdalena Carvalho, renamed and reborn as The Gypsy Woman Oleander, stood on a San Francisco street corner, humming. She held a plate of cornmeal and a bottle of rum in her hands. A glowing point in the darkness, she was a boldly sexual woman brightening the starkness of the urban desert. Raising the rum bottle to the night sky in cheerful salutation she took a healthy swallow.

A small boy danced at the top of the hill. A black giggling roly-poly creature, he somersaulted down the street toward Oleander.

The lights weren't usually so unreliable, but the neighborhood wasn't wealthy. These things happen.

Shadows stretched across garage doors, pooled up against fences, leaked away through missing boards.

Oleander crouched down by the gutter, her solid body radiating, a hot shadow within the greater shadows, she poured out half the rum, sprinkled the cornmeal in a circular pattern. Singing: Eshu-oh. Elegbar-ai-yey. Eshu ohhh —

The streetlights got brighter.

Maybe a cloud moved away from the moon?

Oleander smiled at the small child rocketing down the hill—an odd hop and he stood tall before her, transformed into a grand figure in a wide brim fedora, vintage tuxedo, mirror shades and red tennis shoes. He bent down to greet her. Pulling her up, he hugged her, kissing her on the left on the right on the left. Formal. Ceremonial.

The streetlights blinked. Off. On again. Fragile light dimming. Dimmer.

Oleander handed the tall elegant man a cigar, held the match for him. Every gesture graceful. They stood close together in whispered conference. Comfortable and intense.

gain. In an uncertain world that much was a lead pipe certainty. Times like this Gina always made it a point not to see whatever it was she didn't see.

Gina knew a lot about crime, she wasn't afraid of crime, she had a graduate degree in crime, she understood crime from motivation to modus op; but whatever was going on here—ah, this loopy street corner hoodoo stuff—not so much.

A quick set-to-it double time jaw clenching block later, panting, Gina put her tree down, peeked back along the street. No one around, a look up the street, down the street, nothing. She entertained herself with speculations: The madwoman was lurking in the shadows, a dusky demon conjure woman out to get her, gonna jump her. Steal her palm tree. Right. Things that go bump in the night. "Shit." Gina muttered, "Whatever happened to simple crime? Rob the rich? Another tradition gone to hell." That's why, Gina grumbled, she ended up boosting palm trees. Wouldn't be right to show up empty handed.

Hadn't always been like that. Well, of course not. No one could live with pain like that all the time. The pain came and it went. The past half year she'd spent chasing down quack remedies: water therapy, gold salts, mega-vitamins, mini-minerals. Pain is good for you, it's a learning experience, an indication of energy blockage. Open Up. Ooooopen up. Ooga wooga. Then there was the no-meat no-dairy no-salt no-sugar no-caffeine routine; but Gina didn't want to Attain Sainthood in this lifetime, she only wanted to stop the pain.